Though rough around the edges, Cold Turkey is brilliantly funny, quite daring for the time and original. Its plot primarily revolves around cigarette smoking, nicotine addiction, and the scurrilous tactics of big tobacco companies, but Lear's wide net of scorn and wicked satire also includes television news and advertising, the military, religious hypocrisy, alcoholism, right-wing extremism and militia groups, the medical profession, sex, advertising, small town life, and greed, among other things.

Watching Olive Films' new Blu-ray, I was struck by Cold Turkey's many similarities to Robert Altman's great Nashville (1975), both ensemble tapestries about middle Americans, their hopes and dreams, and each climaxes at a political-commercial rally where someone (three someones in Cold Turkey) are shot and all Hell breaks loose. Cold Turkey isn't remotely as refined as Altman's film but it's still awfully damn good. It's one of the great unknown classics of American film comedy. 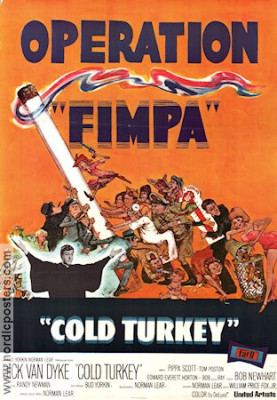 Scurrilous advertising executive Merwin Wren (Bob Newhart) convinces the board of the Valiant Tobacco Company, including its ancient chairman, Hiram C. Grayson (Edward Everett Horton), to offer $25 million to any American town whose entire population can abstain from smoking for 30 days, a scheme certain to win the cigarette manufacturer tons of positive press without having to worry about ever paying out.

The Reverend Clayton Brooks (Dick Van Dyke) of decaying, economically depressed Eagle Rock, Iowa, sees the contest as the means of revitalizing the community, so that he can then abandon his flock for greener pastures in Dearborn, Michigan.

Convincing 100% of Eagle Rock's residents to go cold turkey proves nearly insurmountable. Brooks's own wife (Pippu Scott) is a secret smoker. Most of the city council chain-smokes, as does the town's drunk (Tom Poston) and doctor (Barnard Hughes), who can't get through an operation without a pre-op smoke. The non-smoking Christopher Mott Society (an ingeniously funny and accurate spoof of the Birch Society) is opposed to the idea, and only when Brooks, an ex-smoker himself, decides to resume smoking so he'll have to quit and suffer like everyone else, do the hold-outs begin to waver.

After finally winning commitments from the entire town, the media (Bob & Ray, parodying newscasters of the day like Walter Cronkite and David Brinkley) and gawkers from all over the state descend upon Eagle Rock, while Wren, under increasing pressure from board at Valiant Tobacco, tries to find a way to get somebody to light up.

That Cold Turkey was barely released at all and did only moderately well at the box office is a little puzzling. Partly it uncomfortable nails American vices all too accurately. Another factor is the fact that Dick Van Dyke does not play a likable, Dick Van Dykey sort of character. Sanctimonious, domineering and condescending toward his loyal if mousy wife (Scott, however, is outstanding in the role), Brooks is a pretty miserable excuse for a husband, and driven not out of concern for the health of his congregation or, really, even the future of his community. Rather, he just wants to get the hell out, and the tobacco company's contest provides a fast if difficult means of seeing that happen.

Smoking was much more commonplace in 1969 than it is today, even after cigarette ads were banned from radio and television shortly before the film went into production. The addictive nature of nicotine is amusingly, accurately depicted, with some turning to gluttonous eating, hypnotherapy, and frequent sex trying to cope with their withdrawal. (One member of the town resorting to the latter is played by a young M. Emmet Walsh.) For a time all of Eagle Rock seems to descend into madness: people screaming at one another, a man (Norman Lear himself), crying uncontrollably in a park, and in one clever bit of editing, a cute dog is ruthlessly kicked like a football. (Even scrutinized frame-by-frame, the trick is well-executed.)

Bob Newhart, miscast, tries too hard to be gleefully villainous, but most of the cast is hilarious. I was never much of a fan of Tom Poston, but his big scene with Van Dyke, literally tearing up while boozily trying to explain his addictions to alcohol and tobacco, ranks among the funniest five minutes of any comedy ever made. Barnard Hughes is nearly as good as the pathetic local surgeon who suffers a complete mental collapse when his smokes are taken away. Many in the cast, including Jean Stapleton, Vincent Gardenia, Paul Benedict, Graham Jarvis, Barbara Cason (superb in a telephone conversion, trying to rationalize smoking one last cigarette after the contest begins), etc., would go onto regular or frequent guest star stints on Lear's TV shows.

Smoking and the tobacco industry may be Lear's primary targets, but the rich screenplay is all over the map. With all the good press, government opportunists, including Richard Nixon, no less, try to cash in. Newscasters like "Walter Chronic" are idolized like gods; public interest in the cold turkey town has everyone cashing in, with billboards sprouting like weeds and Brooks finding validation in his actions when he makes the cover of Time magazine, just like Trump - no matter that, under his leadership, the town is being poisoned in different ways. The Pyrrhic victory wins Eagle Rock a military contract to build a missile plant, whose black and billowing smokestacks resemble four colossal cigarettes. Set to Randy Newman's (his first film score) "He Gives Us Love," the funny, terrifying ending shows just what religion, commercial enterprise, and religious faith can do when working in tandem.

Olive Films' 1.85:1 widescreen presentation of Cold Turkey looks fairly good, an improvement over the MGM manufactured-on-demand DVD-R released some years back, but the show itself is visually inconsistent. Some shots look great, others dirty and muddy, and all of it probably inherent with the original theatrical release.The DTS-HD Master Audio mono is fine, supported by optional English subtitles, and the disc is Region "A" encoded. No Extra Features.