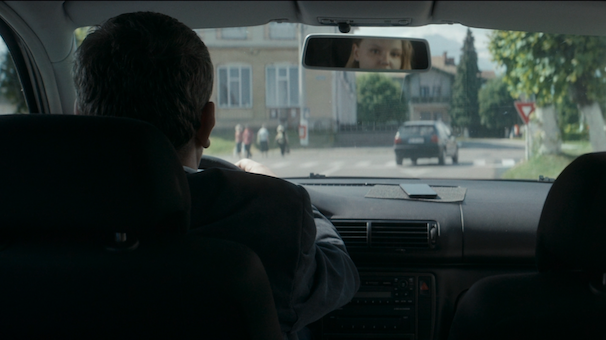 Released by the Criterion Collection at the same time as Romanian director Cristian Mungiu's searing 2012 drama Beyond the Hills, Mungiu's 2016 follow-up, Graduation, is less of an emotional gut-punch. However, the bleakness and carefully observed naturalism of Mungiu's prior work (including his international breakout, 4 Months, 3 Weeks, and 2 Days) is still front and center. The film concerns moral compromise, and the way even a small exchange of "favors" can undo a lifetime of good intentions.

We follow a well-meaning middle-aged dad, Dr. Romeo Aldea (Adrian Titieni), in the aftermath of the assault and near-rape of his teenage daughter, which occurs moments after he drops her off near her school. Romeo immediately tries to fix this, however he can. Partly this is due to guilt -- the whole reason Romeo didn't take the time to drive her all the way up to the school was so he could go meet his mistress (Malina Manovici) sooner -- and partly this is due to his determination that his daughter live a better life outside of Romania. His daughter Eliza (Maria Dragus) has been studying and training to be good enough to get into a foreign school since she was in fifth grade. Now, she just needs to ace three more final exams, and she will have a full scholarship to the University of Cambridge.

When Eliza is too emotionally unsteady to complete the first of those three exams, Romeo begins looking for alternatives. He has a friend, who has a friend, who can talk to the exam supervisor to see that Eliza can be guaranteed the grades she needs on the next two tests. In return, the friend just needs a liver transplant. Romeo agrees, and then must convince his daughter to mark her papers so that the exam graders know to "be more forgiving" with her. Because of the way Eliza was raised -- to be better than the corrupt society that surrounds her -- she resists.

There's a film noir-ish fatalism to Romeo's situation. All the steps he takes to maintain the future he has planned for his daughter only serve to incrementally destroy the life he has in the here and now. His single-minded selfishness alienates him from his wife (Lia Bugnar) and his mistress, the latter of whom has just gotten pregnant. Romeo's attempts to get Eliza to abandon her biker boyfriend (Rares Andrici) just drives her closer to him -- and potentially away from England.

As with Mungiu's prior films, there's an economical inevitability to Graduation's plot -- but one never feels the structure taking precedence over the characters. Mungiu shoots most of his scenes in unbroken single takes that maintain the connection between the actors, and between the actors and the audience. We can be forgiven for forgetting that we are not watching real life unfold. Mungiu's sensitivity is so great, and his actors and crew are so in sync, that the illusion is near-perfect. Graduation feels relatively less immediate than Mungiu's work that precedes it, but the film still plays as the carefully crafted product of a vital and idiosyncratic voice. Cinema is lucky to have him.

The Blu-ray
Graduation is packaged with a fold-out booklet, featuring an essay by Bilge Ebiri.

The Video:
Another excellent presentation. The AVC-encoded 1080p 2.40:1 image shows no signs of damage or digital encoding issues. As with most of Mungiu's films, the color palette is sedate, although this one is relatively less desaturated-looking, especially compared to the near-chromatic look of Beyond the Hills. For example, flesh tones are more peachy than pale white. A first-rate transfer.

The Audio:
The Romanian DTS-HD MA 5.1 surround audio (with optional English subtitles) is naturalistic (no musical score), but extremely fleshed-out and immersive. No noticeable flaws or damage.

(HD, 29:33) - Writer-director Mungiu unpacks the themes of the film, and describes what he saw from his own life and the observations he made that inspired him to write this script.

Final Thoughts:
Cristian Mungiu explores the murky "do as I say, not as I do" world of parental morality in the context of modern-day Romania. As with all of Mungiu's films, Graduation is carefully formulated, deeply analytical, and emotionally devastating. Highly Recommended.