Misadventures of Biffle and Shooster!, The

Kino // Unrated // May 22, 2018
List Price: $19.80 [Buy now and save at Amazon]
Review by Stuart Galbraith IV | posted June 27, 2018 | E-mail the Author
A remarkable achievement of screen comedy, The Misadventures of Biffle and Shooster meticulously recreates the look and, more importantly, the writing and performance styles of 1930s two-reel comedies, five in all.

This sort of thing has been done many times before, but very rarely this well. Filmmakers often spoof older movie genres and forms, from Mel Brooks' celebrated run of movie parodies in the 1970s (Blazing Saddles, Young Frankenstein, etc.) to low- and no-budget send-ups of Ed Wood's infamous Plan 9 from Outer Space and other cheap sci-fi programmers.

Almost never do they get it right. More often than not, the filmmakers lack genuine affection for the very genres they're recreating, and their obvious contempt seriously undermines any chance of honest, knowing comedy. Others try spoofing genres they don't really understand, basing their humor on false assumptions about its components, failing to grasp what made the genre appealing to audiences in the first place. Quite often, these genre recreations don't work because they apply a modern jadedness that's fundamentally incompatible. In short, such movies demand an exactingness requiring an exhaustive familiarity with the form, and a commitment to recreate it fully. Only with that sort of foundation can genuine laughs blossom.

The Misadventures of Biffle and Shooster is a different animal. It's not in any way a parody, a spoof of 1930s screen comedy. Rather, the shorts effectively are 1930s comedies that just happen to have been made in the 21st century. The five short films (plus a bonus, one-reel short) reference and integrate certain gags, banter, character types, etc. from specific ‘30s comedians and shorts, but one of the great pleasures of The Misadventures of Biffle and Shooster is that director-producer Mike Schlesinger's scripts find an ideal middle ground between material that's unexpectedly original yet also warmly familiar. In reviewing this set, I originally planned to take copious notes to keep track of all the references, homages, and nods to '30 screen comedy. This proved pointless because, while on one hand, the references are everywhere, far too many to keep track of, but more to the point within the first few minutes of the first short, I was far too engrossed to want to do that. 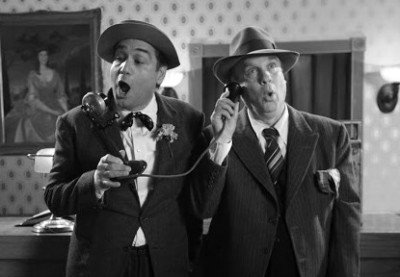 The shorts revolve around the comedy team of Benny Biffle (Nick Santa Maria) and Sam Shooster (Will Ryan), characters predating the short comedies, as a retro-Vaudevillian duo act. Impressively, neither has a direct comedic forebear. Benny Biffle shares certain mannerisms with Lou Costello and Red Skelton, with maybe a dash of Harry Ritz, yet distilled into an original creation. The comic antecedents of Sam Shooster, straight man by default, is even harder to pin down. Physically, he's a bit like longtime character actor James Flavin, minus the irascibility.

The five neo-shorts are all preceded with Blackhawk Films-like text prologues, offering a bit of "behind-the-scenes" production information. Curiously, the opening titles to these films bill real ‘30s directors like Del Lord and performers like Vernon Dent (perennial hothead nemesis of The Three Stooges) and Mae Busch (often the shrewish wife of Oliver Hardy). Some of the actors playing these actors playing characters only vaguely imitate them, like H.M. Wynant's amusing turn as ‘Montague Shaw'-as-Andrew in the first short, while others like Phil Baron's ‘Max Davidson'-as-Dr. Finkelstein, is hilariously spot-on as that emphatically Jewish comedian.

The great comic timing of the two leads compliments the supporting casts. Indeed, all of the performers authentically adjust to the style of acting and comedy found in 1930s Hollywood and in two-reel comedies particularly. Many in the cast, like Jim Beaver, Robert Forster, and the singing Saguaro Sisters (Karen, Katriona, and Shona Kennedy), have faces that would fit right in movies of that era, and the authentic costumes, make-ups, props, and lighting all add to the overall effect. In a nice touch, Schlesinger's jokes sometimes reference ‘30s-specific concepts like the National Recovery Act, politicians, songs and other celebrities modern audiences wouldn't necessarily recognize, just as "real" ‘30s movies do.

The style of comedy is more dialogue- than slapstick-driven. Rather than, say, the Jules White-Columbia house style, these shorts, despite their mid-1930s release dates are a bit closer in spirit to film comedy earlier in the decade: the Marx Bros., Wheeler & Woolsey, Clark and McCullough, etc. Schlesinger's patter underscores this, some of it adapted from classic Vaudeville routines (e.g., "Slowly I Turned"/Niagara Falls") and, probably, with additional adlibbing from the stars, whose impressive skills are on display in some of the extra features.

Inadvertently, this is also reflected in the limited budgets of these obvious labors-of-love. Studio-made 2-reel comedy productions had the run of their lots, so long as they didn't infringe on "important" feature productions. Schlesinger, on the other hand, didn't even have the resources of lowly Educational Pictures, so the sets, nice as they are, tend to feel pretty cramped and claustrophobic. That, in turn, seems to have limited the available coverage in terms of camera angles; most of the shorts are shot looking through the "fourth wall," from the same general camera angles.

This gives them more the feel of an early, static talkie, which in a strange way helps a short like The Biffle Murder Case, resembling as it does the early Laurel & Hardy talkie The Laurel-Hardy Murder Case; and Schmo Boat, a "Cinecolor" revue-style short that visually resembles an early talkie musical. Conversely, the slapstick finale of Bride of Finkelstein, an homage to horror-comedy shorts like the Three Stooges' A Bird in the Head, feels a bit hamstrung by the lack of space. Logistics may have precluded the use of largely unchanged sections of Culver City, Silver Lake, and elsewhere.

But these are minor quibbles. The shorts themselves are quite wonderful. Nick Santa Maria and Will Ryan make admirable additions to the pantheon of screen comedy, even if they're 80 years late to the game. Schlesinger's scripts are affectionately knowing and witty, and it's obvious the supporting casts and production crews "get it" and their work is likewise inspired.

The funny, bountiful supplements include commentaries on all five shorts by Schlesinger and the two leads; a "vintage" Vitaphone bonus short; bloopers and outtakes, including bits from the "Spanish language version" of Imitation of Wife; footage from the team's cut cameo appearance in It's a Mad Mad Mad Mad World; a 1962 television interview; extended musical numbers and behind-the-scenes footage.

Each short is dedicated "In loving memory of all the comedy geniuses in whose wake we swim." Were they still alive and kicking, no doubt they'd be suitably impressed. A DVD Talk Collector's Series title.