Kino // Unrated // June 5, 2018
List Price: $19.97 [Buy now and save at Amazon]
Review by Stuart Galbraith IV | posted July 1, 2018 | E-mail the Author
The bigness of William Wyler's The Big Country (1958) nearly distracts from this fine pacifist Western's remarkable qualities, namely the subtleties of some of the performances and the richness of their characters; the use of the giant Technirama frame to frequently underscore the futility of violence and the relative insignificance of the pioneers feuding over its vast expanse; and the way the screenplay subverts many of the conventions of the Western genre up to that point.

Technirama was basically wide-frame, 8-perf horizontal VistaVision with the addition of anamorphics to render an extremely sharp but ‘scope-shaped image. An earlier Blu-ray release suffered from CinemaScope "mumps," leaving the actors' faces especially looking squashed. Kino's new release fixes that issue, and while the video transfer still has some issues (faded color, scattered warping here and there) most of it looks stupendous. 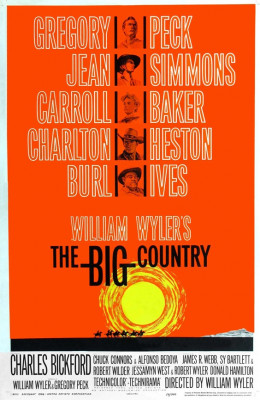 Based on a short story by Donald Hamilton called Ambush at Blanco Canyon (later expanded into a novel version, also called The Big Country), the film stars Gregory Peck as James McKay, a former sea captain who moves to the American West to marry fiancée Patricia Terrill (Carroll Baker), the daughter of tyrannical rancher Henry "The Major" Terrill (Charles Bickford). The moment McKay's stagecoach arrives he's marked as a "dude" by both Steve Leech (Charlton Heston), the ranch foreman who wants Patricia for himself, and Buck Hannassey (Chuck Connors), the no-good thuggish son of rancher Rufus Hannassey (Burl Ives). Rufus and the Major have been feuding for years over access to the Big Muddy, the only source for watering cattle within hundreds of miles. En route with Patricia back to the Terrill ranch, McKay is taunted by Buck and his ruffian cowboy pals, Patricia appalled that her fiancé makes no effort to fight back.

At the ranch, McKay impresses the Major with his obvious gentlemanliness and obvious wealth, but not his growing reputation, in their eyes, as a coward. He objects when the Major goes after the Hannasseys to avenge the assault on McKay, and later he declines to ride "Old Thunder," an unruly bronco Leech uses to haze newcomers and put men in their place.

As McKay's relationship with immature, clueless Patricia sours, McKay gets to know Julie Maragon (Jean Simmons), Patricia's schoolteacher friend whose disused late father's ranch includes the Big Muddy, ground zero of all the acrimony. McKay surprises all when he offers to buy the spread from Julie, hoping to defuse the escalating ranch war.

Kino's new Blu-ray brings out many of the film's qualities better than any previous home video or television edition. The marvelous subtleties in the performances of Gregory Peck and Charlton Heston especially shine through. Peck was a master of contemplation, and here his reactions to all the accusations, insults, and threats of violence is immensely gripping. McKay is a man long past feeling the need to prove his meddle to others. ("How many times does a man have to win you over," Julie perceptively asks Patricia.) It's barely even mentioned, but the implication is that McKay's decades at sea would have broken most men. Watching The Big Country, the viewer spends much of the film trying to visualize McKay's backstory. Instead, McKay becomes determined to tame Old Thunder when no one else (save for discreet ranch hand Ramon, played by Alfonso Bedoya, who died soon after filming) is watching. Any other Western filmmaker would have killed for a scene of McKay triumphally riding the broken horse past slack-jawed Leech and the Major.

Heston's atypical supporting part was worth the lower billing. He's as good as Peck, a loyal soldier not far removed from his later El Cid, loyally serving an unworthy master, in this case a master whose need for personal vengeance trumps the lives of those working under him. Leech's gradual disillusionment is almost heartbreaking to watch.

Wyler and co-producer Peck envisioned The Big Country as a parable about the Cold War and the nuclear standoff particularly. By the end of production Peck and Wyler were barely speaking to one another, which may explain some of the quirks in how all this is dramatized. The Major, refined and living like Southern gentry, is clearly the American; Bickford even has the commanding presence of an American President. Their ranch is "civilized" and orderly, with foreman Leech all-American handsome and clean-shaven. The Hannasseys, the Russian counterparts, live in a Siberia-like desolate canyon (Red Rock Canyon, to be precise) in dilapidated, scattered shacks and the men there rarely bathe. Burl Ives's odd makeup, including outrageously bushy eyebrows, doesn't make sense until one realizes that his look is patterned after innumerable Russian commie villains from earlier ‘50s Hollywood movies.

And yet the screenplay clearly makes Rufus Hannassey the slightly more sensible, pragmatic of the two. The Major is hardly heroic, merely pigheaded and closedminded. Nevertheless, when he foolishly charges headlong into Blanco Canyon, and Leech and his men reluctantly follow, Jerome Moross iconic musical score likens their suicidal charge to the Calvary riding to the rescue. Screwy, that. (Moross wrote few film scores, yet his theme for The Big Country is, justly, one of the two or three most famous ever written for a Western film.)

Wyler and cinematographer Franz Planer use the Technirama format ingeniously. Locals constantly remind McKay, "It's a big country!" and, indeed, it is. Yet Wyler doesn't use the widescreen to showcase big sets or offer travelogue-like vistas, just the opposite. He uses the wide frame to isolate the characters, nearly lost in the frame like ants in extreme long shots. The Major's house, while certainly magnificent, is as out of place as the farmhouse in the middle of Mars in Ray Bradbury's The Martian Chronicles, poking out of the treeless landscape with nothing else in sight. When McKay confronts Leech for a pre-dawn brawl, effectively unscored, sees the two men beating each other and exhausting themselves pointlessly. "What did we prove?" McKay asks.

As noted above, Kino's remastered Blu-ray is a marked improvement over MGM's earlier disc. Individual shots exhibit wobbly warping, and others have faded color, but mostly the image is razor sharp and the general color timing is vastly improved. Despite its length and size, The Big Country was apparently never released in stereophonic sound; the DTS-HD 2.0 mono is adequate but I wouldn't object to a second track remixing the score to stereo were that possible. English subtitles are offered on this region "A" disc.

Kino has really amped up the supplements on many of their older titles, and The Big Country is positively packed with strong extra features. A real delight is Directed by William Wyler, a PBS-aired career biography, featuring Wyler in interview footage shot days before he died, with many long-deceased actors and directors commenting on his career. Extended outtakes from this production relating to The Big Country are included as well. Christopher Frayling provides an audio commentary track. There are interviews with Cecilia, Carey, and Tony Peck, and Fraser Heston, and an interview with Catherine Wyler; a "Fun in the Country" featurette; Director Larry Cohen talks about actor Chuck Connors. There's an animated image gallery, plus a trailer and TV spot.

One of the all-time great Westerns, still immensely entertaining and never looking better on home video, and packed with worthwhile supplements, The Big Country is a DVD Talk Collectors Series title.