The National Parks have been called "America's Best Idea"- areas where nature is allowed to flourish without being pillaged in the name of profits by humans. A segment in this IMAX documentary illustrates this idea from John Muir being pitched to president Theodore Roosevelt (played by actors) during a trip to California's Yosemite. Roosevelt had lost his wife and mother within the same day which served as a wake-up call to the things that were truly important in life. Muir's concern was that logging companies were keen on cutting down entire forests, and there needed to be some form of protection set in place to ensure that at least some areas of the country could be kept unspoiled. 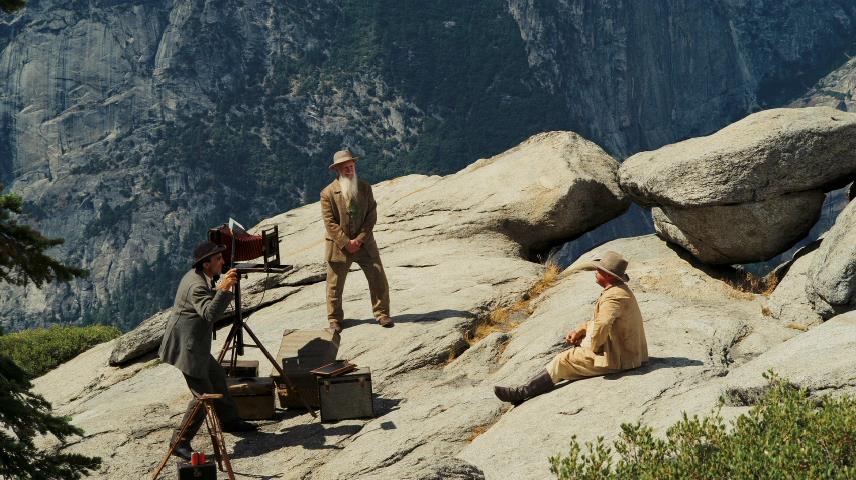 The main characters of this documentary however are a present-day trio of enthusiasts (Conrad Anker, Max Lowe and Rachel Pohl) on a road trip through a number of national parks including Yellowstone, the Grand Canyon and Glacier National Park. They're a bit more ‘advanced' than the average tourists and go rock climbing in a number of places (including Devils Tower, as seen in Close Encounters,) and do some mountain biking on the mountaintops in Moab, Utah (where one of them falls down on camera, but is humble enough to have it included). This looks both fun and exhausting, the most grueling being a stop at the Pictured Rocks in Michigan where they camp in below-freezing temperatures and climb up the ice of frozen waterfalls. Robert Redford provides sporadic narration, expressing his general love for national parks but not getting in the way of the on-screen adventures.

As with most IMAX films, the short running time doesn't allow it to go too far in depth into any of the featured locations but does enough to entice even an "indoorsman" like me to think about visiting them- although I don't really crave setting foot anyplace colder than Northern California in winter! The featured subjects show what's possible if you're really serious, but there are also a few shots of more "average Joes" enjoying the scenery from the safety of the marked trails. While Redford tries to stay away from preaching, there's also a gentle reminder to all the humans not to leave any trash behind during their visits. 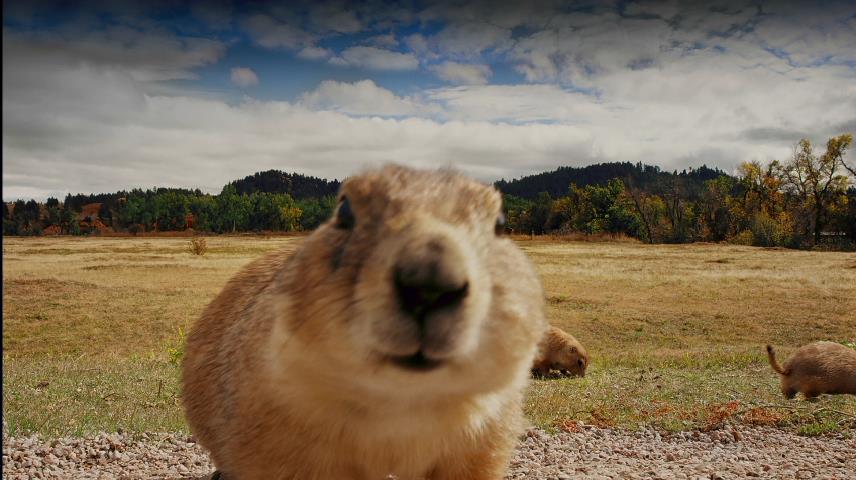 Shout Factory has commendably been releasing a number of IMAX documentaries with both a 4K Ultra Hi-Def disc and a 3D Blu-Ray disc. I've been rather lukewarm on the 4K format so far mainly because it doesn't support 3D, and of course viewed the 3D presentation first. As with "Dream Big" released at the same time, disappointingly not all of the footage here was actually shot in 3D- much of it is in 2D and shown with a pushed-in effect. Most notably the views shot from high up are only in 2D, perhaps it was difficult to get the 3D camera to high altitudes. Even some of the ground shots are also in 2D. There are still a number of good 3D moments, mainly shots from inside an ice cave, as well as the computer-animated maps that show the journey taken and most notably a few vintage Underwood stereoscope pictures of loggers. Still, this is not a great showcase for the format and likely had theater patrons telling staff that the 3D "wasn't working"- best to just enjoy the material as it is and take the 3D shots as a bonus. Most of the footage was shot on 65mm IMAX film, which appears sharp and rock solid without the slightest hint of dirt or scratches, but there is a bit of digital gradient banding evident in a few shots of the sky.

The 4K disc includes the film both with and without HDR10. Viewing all of the HDR10 presentation, the absence of 3D was of course a let-down but given its inconsistent use it wasn't completely as such here, and it allows you to see the 2D footage without the pushed-in effect applied. Some slight gradient banding was still present, a problem which I thought HDR was supposed to solve. There is of course a slight uptick in detail which is nice but not very dramatic compared to the 1080p Blu-Ray, and I still missed the 3D effect on the shots that used it. 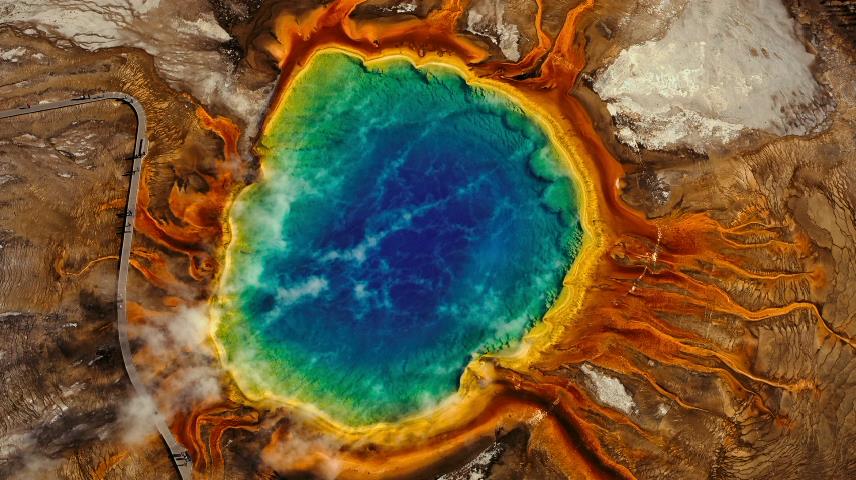 Both discs feature a Dolby Atmos mix, although I didn't notice anything that took advantage of that over a regular 7.1 system. (On an Oppo player, with audio output set to Auto you will need to turn off Secondary Audio, which isn't even included on these discs, for the 4K disc to play properly- otherwise it will output the Atmos track as 7.1 PCM which your receiver won't be able to decode anything from. The Blu-Ray disc is flagged to output a straight bitstream regardless of settings.) The surrounds are used quite effectively here, with the sound of running moving 360 degrees in one instance and a playing of Mungo Jerry's "In the Summertime" with the vocals completely in the rears (during slow-motion footage of bears hunting for fish.) An alternate 5.1 track flagged for Dolby EX is also included as are Spanish and French tracks, and hearing-impaired subtitles are included as well. 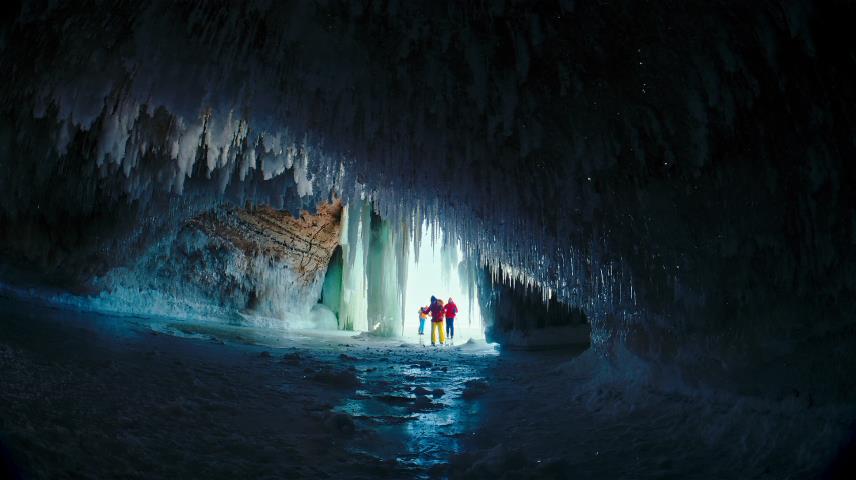 Both discs include extras in 2D and 1080 resolution- a number of short segments made for online viewing. These must be accessed individually without a "play all" option which is a bit cumbersome, and some are very brief- one segment shows a bit of shooting of the scenes depicting Muir and Roosevelt but doesn't even name the actors or let them speak. The longest segment is four minutes showing the filming with the IMAX 3D camera at the below-freezing Pictured Rocks, where it was hard to get the camera working in such a cold environment. It's also mentioned that this was one of the most important locations for shooting 3D and that part of the film does include the best of that, but there's no explanation as to why so much of the rest of the film consists of pushed-in 2D shots.

The trailer for "National Parks Adventure" is included, and the 4K disc also has trailers in 4K resolution for Shout's other IMAX titles: Flight of the Butterflies, Humpback Whales, Journey to Space, Rocky Mountain Express, The Last Reef, Wonders of the Arctic and Dream Big. 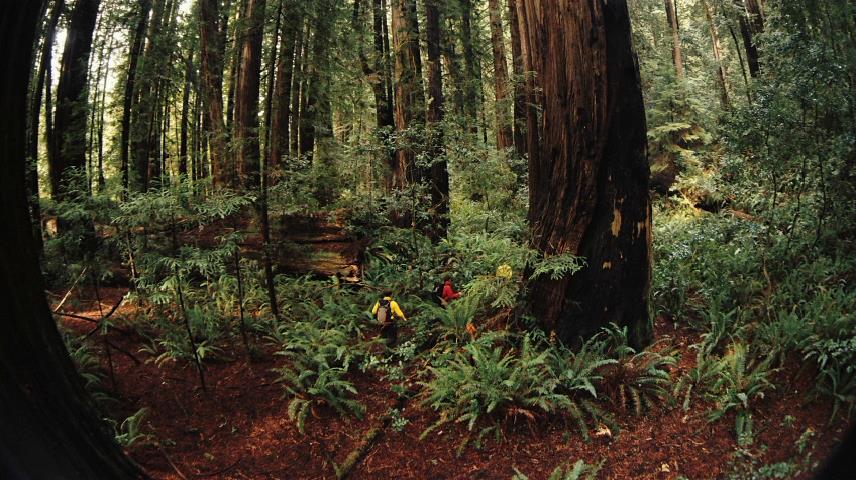 While I'm always happy to see more 3D content being issued and IMAX documentaries usually feature the best of that, the sporadic use of it here will likely disappoint most fans. This is still certainly worth watching for the subject matter however, with many impressive scenic shots with and without depth. If you have a large screen you will certainly appreciate that here, but also at least think about leaving it for a while to check out the world outside.