Warner Archive // Unrated // July 10, 2018
List Price: $21.99 [Buy now and save at Amazon]
Review by Stuart Galbraith IV | posted August 7, 2018 | E-mail the Author
Premiering just four days after the opening of MGM's much-publicized, problem-plagued, mixed-bag remake of Mutiny on the Bounty, producer-director (and co-writer and co-star) Peter Ustinov's adaptation of Billy Budd (1962) is by far the superior picture. Adapting Herman Melville's final, unfinished novel, not published until 1924, more than 30 years after his death, Billy Budd is still maybe the finest seafaring drama ever made.

Its basic story resembles Bounty in some respects, but has little in the way of swashbuckler-type action. Colorful and technically accurate, most of the drama stems from the relationships of its three main characters, and a great deal of that is implicit. Terence Stamp is terrific as the naively optimistic title character, conscripted aboard the warship HMS Avenger, and Ustinov is typically excellent as the ship's pragmatic captain, but Robert Ryan's sadistic master-at-arms is unwaveringly riveting, the culmination of similar parts he'd played over the previous 15 years. Ryan created unforgettable characters in such films as The Set-Up (1949), On Dangerous Ground (1952), Odds Against Tomorrow (1959), and The Wild Bunch (1969), and yet Billy Budd may feature his finest performance. (His final role, in The Iceman Cometh, is another contender.) Distributor Allied Artists, still primarily releasing exploitation and genre films, didn't know what to make of Ustinov's film, clearly expecting something more akin to Hammer's concurrent swashbucklers for Columbia. According to Ustinov, they absurdly suggested adding stock footage of swashbuckler-style action footage at the end, which the actor-director rightly refused to do. Conversely, their poster art (see below) was imaginative if deceptive, suggesting a big, Cinerama-style epic. Audiences were probably surprised that the film was photographed in black-and-white and ordinary CinemaScope. 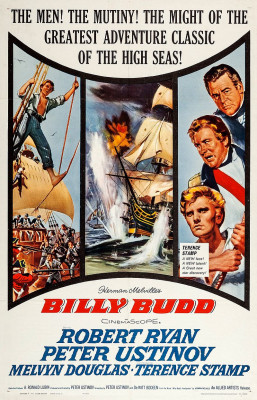 In 1797, the British warship HMS Avenger, at war with France, conscripts much-loved crewman Billy Budd (Terence Stamp) from the civilian merchant vessel The Rights of Man. The crew of the Avenger are terrified of John Claggart (Robert Ryan), the master-at-arms (in charge of discipline), a highly intelligent, circumspect, but sadistic man, ready to flog anyone for any or no reason. Billy's new shipmates, including maintopman Enoch Jenkins (Ronald Lewis), sailmaker Dansker (Melvyn Douglas), and maintopman Talbot (Robert Brown), are quickly won over by the illiterate but good-natured, straightforward, and sweetly optimistic Billy. His cheery nature, singing songs and smiling and waving at Capt. Vere (Peter Ustinov) initially leave the officers nonplussed. Is Billy, they wonder, a grinning simpleton, or might he genuinely be as innocent and unspoiled as he appears?

This presents a problem for Claggart. His attempts to intimidate and thus corrupt Billy's innocence go nowhere. Even after Claggart is directly responsible for the death of bitter Jenkins, Billy's respect for Claggart is unwavering. "I'm sure you must have had a reason," says Billy. He simply cannot imagine anyone could derive pleasure from another man's pain. Worse for Claggart, Billy feels pity for the emotionally isolated master-at-arms, an act of generosity unimaginable to a lifelong bully such as Claggart.

(Spoilers!) When Claggart falsely accuses Billy of the unimaginable, plotting a mutiny, the stammering foretopman, unable to put his emotions into words, strikes Claggart dead. Though Capt. Vere and the other officers (played by, among others, Paul Rogers, John Neville, and David McCallum) have no doubt about Billy's innocence as far as Claggart's charges are concerned, striking a superior officer, a capital offense in a time of war, leaves them with little choice but to execute the beloved crewman. As men they condemn Claggart's inexcusable behavior, steadfastly reliable and efficient officer though he might be and yet, in a time of war (Melville and the picture argue), any breach of discipline even by a crewman as saintly as Billy Budd and with the most justifiable of cause must be punished accordingly, without exception, lest chaos follow.

Outside the three leads, the mostly British cast play familiar character types, but Billy, Claggart, and Capt. Vere are extraordinarily complex ones played with great subtlety. Capt. Vere's quandary is both intellectual and moral, and the notably smart dialogue addresses the complexities of Vere's problem with great intelligence. Stamp, making his debut, overcomes the pitfalls of basically playing a saint, making him grounded in basic decentness and humanity rather than otherworldly and Christ-like.

But it's Robert Ryan who really lights up the screen anytime he's in frame, and though never apparent onscreen one senses Stamp and Ustinov were awed by Ryan's great skill at expressing myriad complex emotions with the subtlest of facial expressions.

Warner Home Video's earlier DVD was great but the new Blu-ray improves the viewing experience substantially, greatly enhancing for the audience the performances whose eyes and faces we can study that much more closely. The black-and-white cinematography also looks better if imperfect (minor damage here and there), allowing us to appreciate the at-sea location work and the period detail of the ship and costumes. The 2.0 DTS-HD Master Audio mono is excellent and English subtitles are included.

Supplements consist of a trailer and an audio commentary, with director Steven Soderbergh interviewing actor Terence Stamp. (The former directed the latter in the excellent The Limey.)

One of the best films of its kind, Billy Budd is a DVD Talk Collectors Series title.