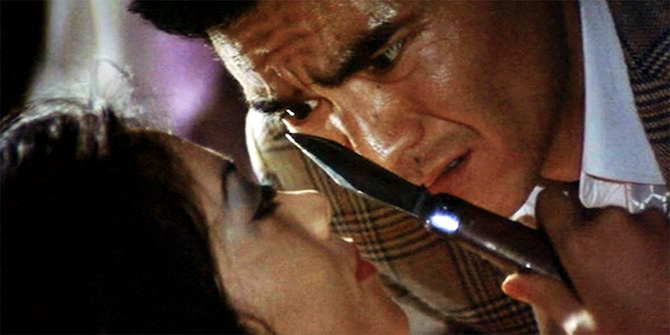 NOTE: The images accompanying this review are taken from various online sources and do not represent the quality of the Blu-ray under review.

In 1972, just one year before director Kinji Fukasaku's iconic gangster epic, Battles Without Honor and Humanity, began to unfurl on Japanese movie screens, Fukasaku's similarly gritty crime flick, Street Mobster, was released. There's a lot in common between Street Mobster and the Battles movies, including an unflinching pseudo-doc style and a magnetic lead performance by Bunta Sugawara as an objectively awful human. While Battles sought to paint a sprawling portrait of the post-WWII underworld, Street Mobster is a more confined character study, smuggled inside of a frantic and frenetically-shot shoot-'em-up.

Though he has never said as much, it would not be surprising if Paul Greengrass ripped the restless handheld camera style of his Bourne movies from Fukasaku's work here. More than 3/4 of Street Mobster is shot with handheld cameras that often seem like they're catching up to the action, rather than presenting and framing it, like in a typical film. This approach is still disorienting, even with shaky-cam since becoming a fairly common stylistic trope, and it gives the film a flavor of unvarnished, dangerous reality -- even as the script flirts heavily with predictable melodrama.

Sugawara plays Okita, the titular street mobster, who returns from a stint in prison to discover that the old gang is gone. He teams up with a brainier low-level guy like himself, Kizaki (Asao Koike), to carve out a piece of the racketeering pie. Their ragtag gang of punks finds itself in the middle of a squabble over territory between two more established families. One of the bosses, Yato (Noboru Andô), sees a lot of his younger self in hot-headed Okita, so Yato gives him more second chances than are probably in either man's best interests.

Okita doesn't think. He only understands brutality, so it should come as no surprise that the film's love story subplot is violently twisted while also somewhat genuinely sweet. Looking to get laid after his time in prison, Okita is reintroduced to Kinuyo (Mayumi Nagisa), a woman whom he and his old buddies kidnapped, raped, and sold into prostitution. It comes as no surprise that Kinuyo tries to kill Okita upon seeing him face-to-face again, but he overpowers her. The film suggests that these two outcasts understand each other because they are so mutually screwed-up. (Not coincidentally, Okita's mother was a drunken prostitute whom he used to hit, so old habits die hard.)

Street Mobster is a tough film that doesn't mind making its viewers uncomfortable. However, Fukasaku puts enough weight on the personal relationships in the film to ensure it is more than just a pulp provocation. By any normal metric, Okita is an irredeemable piece of street trash, but Sugawara's performance makes him impossible to hate. Like a wounded animal who strikes out at anyone who comes near him, this character makes sense to us -- even when his decisions don't.

The Blu-ray
This disc is compatible with both Regions A & B. The first printing of Street Mobster includes a color booklet, featuring writing by Jasper Sharp. As usual for Arrow titles, the sleeve is reversible, with original poster art and newly commissioned art by Chris Malbon on alternate sides.

The Video:
Street Mobster is a pretty grainy and high-contrast movie in general, and with that in mind, I think this AVC-encoded 1080p 2.35:1 presentation does an outstanding job of reproducing that style. Colors are stable. A generous bitrate (in the mid-to-high 30s) ensures no noticeable encoding issues with the frequently fast-moving camera. The print itself is free from dirt and damage. I was extremely satisfied.

The Audio:
The Japanese LPCM 2.0 mono audio (with optional English subtitles) shows some signs of age, but it's crisp and clear where it counts. Dialogue, music, and effects (POW! POW! POW!) are all well-defined.

- Mes, who is one of Arrow's go-to Japanese cinema experts (his other commentaries for the label include Miike's The Happiness of the Katakuris and Black Society Trilogy), returns with another info-packed discussion.

Final Thoughts:
Kinji Fukasaku's gangster flicks began to resurface in the early '00s, thanks to Quentin Tarantino's praise and homage in the Kill Bill films. It's been roughly a decade and a half since Street Mobster hit stateside DVD, and arguably it's an even more bracing shock to the system now. The style and attitude may have been emulated in a thousand flicks since, but the power of Fukasaku's original work has not been diminished one bit. Highly Recommended.