Six friends that are more fun than those other Friends 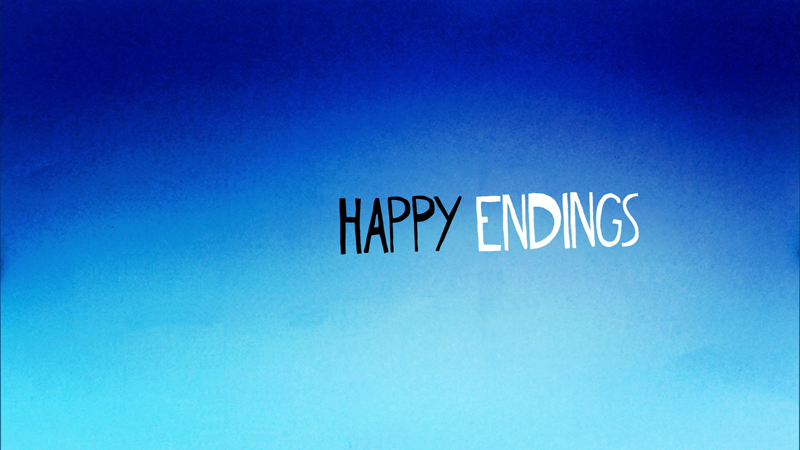 Six hip, young friends living in the big city, having various misadventures, interpersonal conflicts and romantic entanglements. That's the makings of a classic sitcom. But unlike that well-known multi-cam juggernaut Friends, when those ingredients came together to create Happy Endings, the show ran only three seasons. Fortunately, those three seasons featured some fantastic television, powered by an excellent cast and a sense of fun and silliness that has marked so many of the best shows in recent history.

Set in Chicago, the show centers around Alex (Elisha Cuthbert) and Dave (Zachary Knighton), a couple who split when Alex leaves Dave at the altar. Sharing the same group of friends--including yuppie husband-and-wife Jane and Brad (Eliza Coupe and Damon Wayans, Jr.), perpetually single Penny (Casey Wilson) and gay slacker Max (Adam Pally)--the duo decide to remain cordial with each other, and the sextet spends more time with each other than most friends at the start of their 30s. The show, which boasted a fantastic creative crew, including producers/directors Joe Russo and Anthony Russo, weird-TV guru Jonathan Groff and an all-star team of writers and directors, took what could have been a very standard sitcom and blended in a wealth of style and surreal comedy to make it truly memorable. 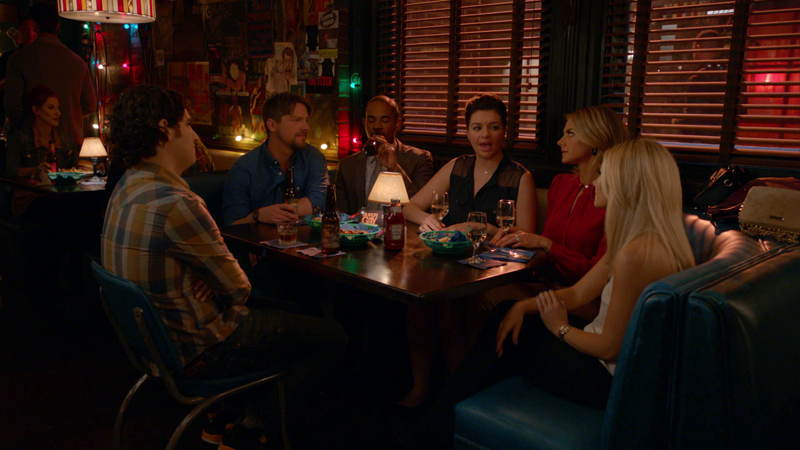 The key is the cast though. The six core stars have tremendous chemistry, and each has their own way of adding something unique to the show. Whether it's Cuthbert's take on the dumb blonde, Coupe's Type-A leader, Knighton's softshell male lead or Wayans and Pally's stereotype-defying performances, the actors always show you something new and different. Coupe is hysterical as the alpha of the group, and when the show pushes the character to the extreme--questioning whether she might possess something akin to superpowers--it's a stretch that works because Coupe sells it inside the nonsensical world of the series. That her relationship with Wayans--dominant, sexually aggressive, and yet utterly loving--is not commonly seen on TV only makes her that much more interesting.

While Knighton's painfully earnest sandwich-slinger Dave is worthy of derision--Knighton hits all the right cues when it comes to a nice guy who tries way too hard to be cool-- Cuthbert's Alex is adorably dim, to the point where she could have trouble getting out of her apartment each day. Cuthbert never plays her in a way though that allows her to simply be the butt of the show's jokes (no more than any of the other characters are, since the group exists to rip on each other in frequent pile-ons.) She may not understand what's going on at (most) times, but she's more than just a dummy, even if that element is played to the hilt and works wonderfully, particularly when she can't read a situation, like when she attends a Halloween party in a stunning Marilyn Monroe costume--but with a husky cold-induced voice--and a guy takes a liking to her for the wrong reasons. Even Wilson's Penny, the girl always chasing after a guy and the closest thing the show has to a stock character, has a great blend of quirks and charms to make her something special, especially when it comes to her ridiculous physical comedy (something the show excels at, with a great doubles tennis match--between Brad and Jane and Max and Alex--being one of the series' highlights.) Penny walks a fine line between pathetic and unfortunate--especially later in the show's run, when the years of trying to unsuccessfully land a guy start wearing on her. That the show can handle genuine pathos alongside with flat-out goofiness, is a mark of solid character development, aided by quality writing and acting.

Though the characters and performances are the engine of the series, the stories are not just along for the ride. Just having Max' gay relationships in the mix was something different for the time (and, honestly, still now) as was Brad and Jane's interracial marriage, which opened up avenues the aforementioned Friends couldn't travel. Otherwise, the show wasn't really breaking new ground in its plots, telling traditional sitcom stories of mistaken identities, personal milestones and hassles or bad-date crises, though it made those tropes feel fresher by offering a new spin on them or taking them to absurd new heights. For example, one episode is built around Penny attempting to avoid someone she finds annoying by lying--classic--but the lies snowball and suck in the entire group, resulting in--among other things--Alex pretending to be both a lesbian and interested in dating Dave and Max' landlord.

The thing that truly sets these stories apart from the pack is how they were told, often using film references or style (think similar to Edgar Wright's Spaced but on a smaller scale), along with whip-fast dialogue and off-focus character interaction that continued a joke even while the dialogue might be moving on to the next beat. You'll often catch a character reacting to something said in the background or the edge of the frame, adding layers to the comedy that you just don't see very often. In this series, a look or a gesture can be just as funny as a punchline.

The show also embraced a meta sense of comedy, commenting on its existence as a television series and the unnatural construction of the characters' lives, like an entire episode based around a Three's Company-like situation. Characters will reference how things are different "this season", but play it off as something natural, or discuss a B-plot as two characters having their own thing "this week". This playful attitude just added to the feel that this is not your usual sitcom. Sure, there are tons of one-liners and punny gags (and the characters have that habit of forcefully inventing words and phrases ["gaycist", "pexting"] that has been the awful legacy of Seinfeld) but the batting average is remarkably high, and there's enough weirdness going on to keep it from feel well-worn. 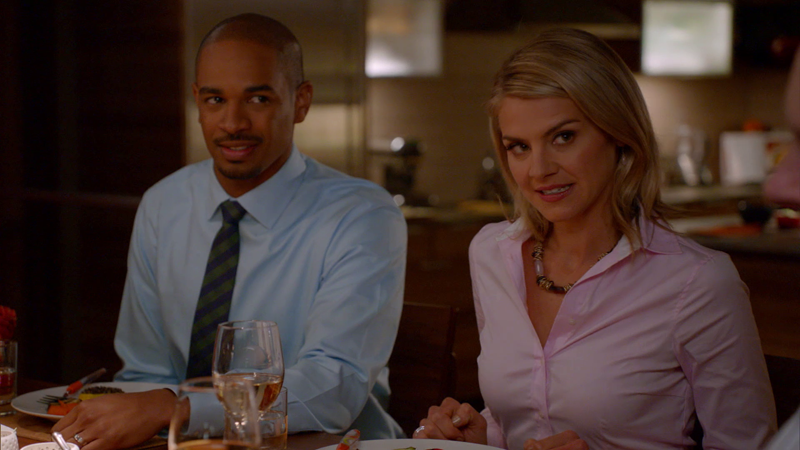 The three seasons of Happy Endings are spread over six Blu-ray discs, which are packed into three standard-width dual-hubbed keepcases held in a slipcase. The discs have static menus with options to play all the episodes, select shows, adjust the setup and check out the extras (where applicable.) There are no audio options, but English subtitles are available.

The 1080p, 1.78:1 AVC-encoded transfers here are not reference-quality (likely a result of stuffing three to four hours of TV per disc) but they aren't painful to watch either, with quality color (though reds can burn a bit bright) and a solid amount of fine detail, though black levels could certainly use some better differentiation (Penny's dark hair often lacks definition and the many scenes at the bar can get a bit murky.) Close examination will reveal issues with the translation to disc, like pixelation, aliasing and blockiness, as well as issues with excessive noise in places, but they aren't a consistent presence and they won't affect your enjoyment of the show.

The DTS-HD Master Audio 5.1 soundtracks on these episodes aren't going to blow you away, as the surrounds are a bit low in the mix, offering up some light atmospherics and music, as well as some spillover, with all dialogue constrained into the center channel,where it is strong and clear. Don't expect much of anything when it comes to the low end, as the show rarely has anything for it to do (it's dialogue-focused and only has a few notable music or sound effects scenes.) There are no issues with distortion, and you'll have no problem hearing everything, including the asides and "soft" jokes.

The extras are carried over from the original DVDs released between 2011 and 2013,which means the third season has no bonus features. The extras kick off with a pair of Banana Republic Style Previews (2:18 and 2:11), in which series costume design Keri Smith talks about the styles she developed for the characters--girls then guys--using clothing from Banana Republic as examples, in a classic bit of sponsored content.

Each of the first four discs has a selection of deleted scenes, 25 in all, running a combined 24:28. Though it's mostly just extraneous cuts from the episodes, there are definitely a few that are worth checking out, including a scene between Penny and her future self, more with Penny's depressed mom and fun conversations from a wedding. If you finish the three seasons, you're going to want more, and these moments will scratch that itch for a bit.

A Mike Relm remix (1:28) blends dialogue from the show and a funky beat to create an enjoyable little tune, which is way better than the acoustic Mark Douglas' parody theme song (1:17), which is a thing you can listen to. Douglas returns (along with Relm as his "bandleader") to interview Wilson and Pally (5:02) in advance of the show's premiere. Faux cringey, with both guys interfering via song, it's just not worth the time to watch it.

Wrapping up the extras are three separate outtakes reels, with a total of 13:05 of hijinks from the cast, including flubs and goof-em-ups. It's not the most hilarious material, but they are obviously having fun, and it feels good to watch. 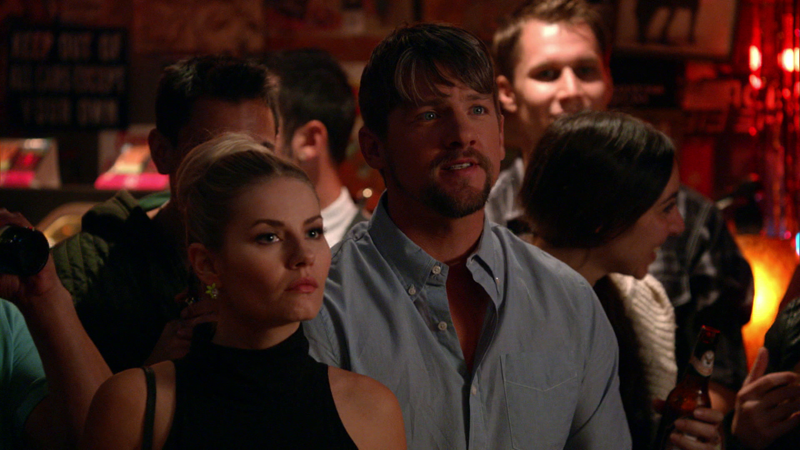 In a just world, Happy Endings would have run for more than just three seasons, rightly hailed for its outstanding cast, oddball sense of humor and entertaining style. But we live in a garbage reality where Two and a Half Men runs for 12 seasons, so we only have 57 episodes of Alex, Dave and the gang to enjoy, but at least they are now available in a very affordable Blu-ray set that looks and sounds solid and brings back the previously available extras. It's a great opportunity for fans to get re-acquainted, and for newcomers--especially those who enjoy shows like Community--to dive in. Now, where's a release of Marry Me?
Francis Rizzo III is a native Long Islander, where he works in academia. In his spare time, he enjoys watching hockey, writing and spending time with his wife, daughter and puppy.Follow him on Twitter