Izzy Gets the F*ck Across Town 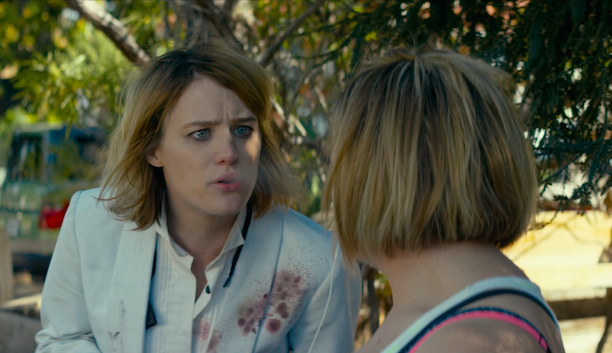 The new-to-home-video dramedy Izzy Gets the Fuck Across Town is a slight and quirky character study whose excellent cast makes much more of its low-budget After Hours-in-the-daytime premise than the punk-rock preciousness of its title might initially suggest.

Mackenzie Davis (Tully, Halt and Catch Fire) finds the right balance between vulnerable humanity and self-involved impertinence as title character Izzy, first glimpsed waking from a one night stand and dressing in a Party Down-style server's uniform that has been stained with red wine and/or someone's blood. She learns that her ex-best-friend and ex-boyfriend are not only getting married, they are having an engagement party on the other side of L.A. later that day. Izzy decides that she must crash it.

Writer-director Christian Paperniak (making his feature debut, after directing some shorts and a few recent editions of the NBA 2K video game series) puts some obvious roadblocks in Izzy's way -- car's in the shop, no money for an Uber -- but seems more interested in seeing her bounce off of different one-scene characters while looking for help, rather than worrying too much about finding new convoluted ways to thwart her journey. This gives Izzy the chance to cross paths with such likable performers as Lakeith Stanfield, Haley Joel Osment, Alia Shawkat, Kyle Kinane, Rob Huebel, and -- in a particularly memorable, and even touching, scene -- Annie Potts as an eccentric, shut-in visual artist.

Along the way, we get a better picture of who exactly this Izzy is: a talented musician who used to be in an indie double-act with her sister Virginia (Carrie Coon), but who has been in an emotional and career stalemate since the two of them had a falling-out. It's a surprise to no one but Izzy when her cross-city journey takes her eventually right up her sister's street. In another highlight of the film, the pair are prodded into performing again for houseguests, and their rendition of "Axemen" by the early riot grrrl band Heavens to Betsy shows not only a glimmer of what they once were, but what they might potentially become.

It's the moments of surprising poignance, such as this, that make the film something more than a series of sketches about millennial life in modern L.A. Izzy does eventually get to her party, and things play out both as expected and in ways that are totally unexpected. Mackenzie Davis, who holds the whole film together extremely well, particularly shines in these late scenes, as the film forces her character to undergo a series of abrupt emotional shifts that Davis makes logical and organic.

Viewers who were weaned on the Sundance-boom-era of quirky indies (like your humble reviewer was) might be the most appropriate audience for Izzy Gets the Fuck Across Town, but the performances are such an attraction that anyone looking for some clever and relatively undemanding entertainment will probably have a good time.

Shot on a low budget, this flick nonetheless has a simple but pleasantly colorful style that translates well in this AVC-encoded 1080p 2.35:1 transfer. The bitrate is high, so no problems with digital noise or artifacts.

The Audio:
The disc offers both DTS-HD MA 5.1 surround and DTS-HD MA 2.0 stereo audio mixes. Not a huge difference between them, although the riot grrrl needle drops sound even bigger in the surround mix. No complaints, though. Dialogue is clear and well-mixed. Ambience is present but unobtrusive. An English SDH track is also provided.

- An energetic and intensely informative commentary that, like the best commentary tracks of old, will provide some helpful hints to folks who want to make indie films themselves while entertaining standard-issue film buffs.

Final Thoughts:
Izzy Gets the Fuck Across Town is like a Sundance-era indie where millennial angst and slackerdom has replaced Gen-X angst and slackerdom. The performances, especially Mackenzie Davis in the lead, make for an offbeat good time. If you're not looking for much more than that, this flick comes Recommended.