Joe Friday is back on the beat 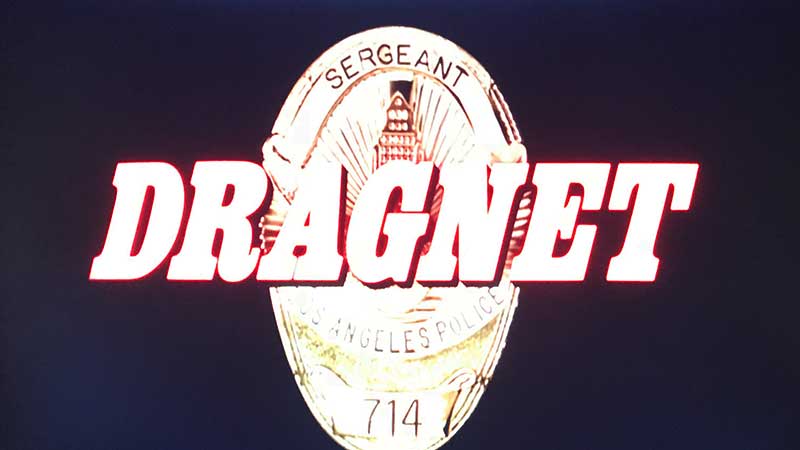 Note: These images are for illustration purposes only, They do not represent the quality of the disc.

The idea of a comedic film adaptation of a hard-nosed TV series starring Tom Hanks and Dan Aykroyd seems odd to think about more than 30 years after it hit theaters, but at the time, it had all the makings of a summer hit, and Dragnet reached theaters at just the right time, before Hanks would become a megastar, and at the height of Aykroyd's career, post-Ghostbusters. It ended up a big hit, but has faded in memory over time, eclipsed by Hanks' skyrocketing filmography and lumped in with what was a series of bad choices by Aykroyd. Despite that, for fans, it remains a beloved, silly farce, and holds up decently today, despite some obvious flaws.

Aykroyd plays Joe Friday--or more precisely Joe Friday's similarly-named nephew--who walks the same beat as his famed uncle, well known from the radio and TV series Dragnet. Friday was a virtuous man out of time even in the original show, but in 1987 he's even more anachronistic, a grown-up boy scout who lives life by the book and considers him and his colleagues as the last line of defense against the scourge of crime. As Friday, Aykroyd is simply perfect, capturing Webb's stiff, no-nonsense persona in a way that is less an impersonation than a loving homage.

When Friday loses his longtime partner on the force, he's paired with a new detective by the name of Pep Streebek, the polar opposite of his starched-collar cop. Hanks is excellent as Streebek, bringing the boyish energy that marked his work of this period. An excellent complement and foil for Aykroyd, Hanks makes sure that the film isn't the dour experience that hanging out with someone like Friday could be, and encourages Aykroyd's character to grow and change, which is something you need in a film, but could get away without in the series. 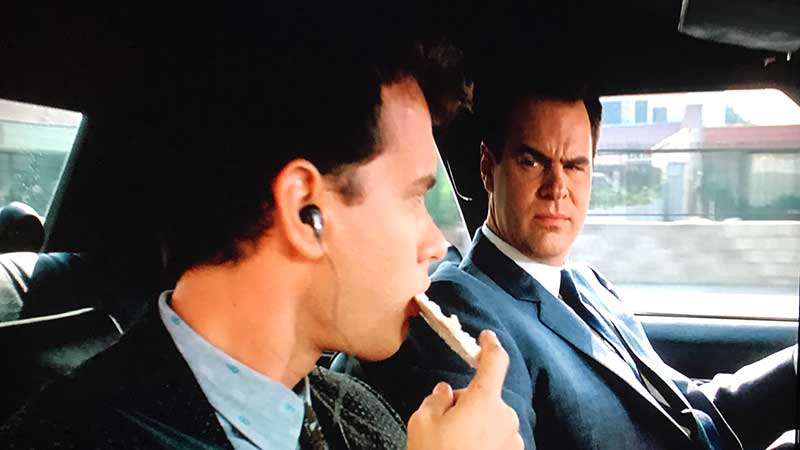 The core plot sees Friday and Streebek tracking down the group P.A.G.A.N., which has been terrorizing the city of Los Angeles, and running afoul of Moral Majority-stand-in Reverend Worley (a wonderfully creepy Christopher Plummer), who is building his own coalition to take on P.A.G.A.N., joining with strange bedfellow smut-peddler Jerry Caesar (Dabney Coleman.) The film doesn't keep its secrets for very long, and the film becomes less a mystery and more a caper, as Friday and Streebek attempt to catch the bad guys, including an undercover visit to a huge P.A.G.A.N. gathering, which may be the film's most-remembered moment, if only because Hanks and Aykroyd wear goat-hair leggings.

As directed by Tom Mankiewicz (of the famous Hollywood family) and written by Aykroyd, Mankiewicz and Alan Zweibel, Dragnet is a very straight-forward film. Though it flirts early on with Police Squad-style humor (The Naked Gun would hit theaters a year later), there's very little that distinguishes this film from other comedies of the era (which likely has helped it fade in cinema history.) Part of the problem has to be a lack of quotable lines, with its most famous likely being the somewhat staid introduction of Alexandra Paul's character Connie Swain, and only because it pays off later in the film in a gag and because Friday's lines are mostly complex, impossible to remember runs. On the other hand, as a situational comedy, the performances are solid across the board, with some very funny moments with Coleman (playing his sleazy role to the hilt), Superman baddie Jack O'Halloran and Dragnet veteran Harry Morgan among others. For most of its runtime, Dragnet is an entertaining film that rides on the performances of its cast.

One thing that didn't stand out from memories of the film (well, one thing besides the presence of a nearly-topless strip club scene in a PG-13 movie) is how plot and action-heavy the final act of the film is. Sure, there have been car chases and action beats before this point, but the film has been comedy first (or at least a very close second.) It feels like the film loses the humor thread a bit, in part because the plot separates our heroes, and puts the focus on Hanks. It's not as if Hanks isn't funny--obviously--but when you remove half the film's comedic core--not the mention the more exaggerated and explicitly comedic portion--and put the emphasis on action, it's hard to maintain the laughter. 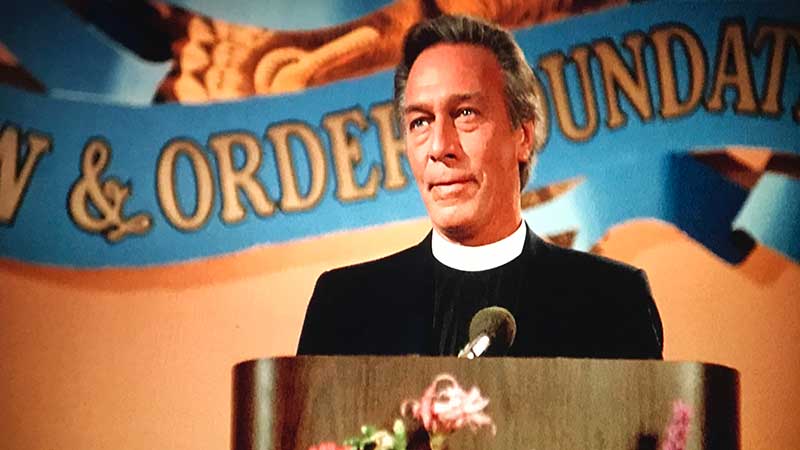 Number 52 in the Shout Select series from Shout! Factory, Dragnet arrives on one Blu-ray disc, packed in a standard-width keepcase, which is held in a slipcover that repeats the new cover illustration, which is unfortunately pretty bland. The original poster art is available on the inside of the dual-sided cover. The disc features a static menu (backed with the film's opening theme) with options to watch the film, select scenes, check out the bonus features and adjust the set-up. There are no audio options, but subtitles are available in English.

Despite no mention of a new master for this 1080p, 1.85:1 AVC-encoded transfer (a Region B Blu-ray was released in 2016), the image looks quite nice, sporting impressive color and a healthy amount of fine detail, raising it well above the 1998 DVD (natch). The P.A.G.A.N. rally and the action-filled night scenes in the film's back half benefit from the added detail and improved black levels, with a consistent layer of grain enhancing a pleasing look. There are no notable issues introduced in the transition to Blu-ray.

The DTS-HD MA 2.0 track delivered here is more than enough for the film's comedic beats, keeping the dialogue clean and easily understood, but you might expect more for the film's action scenes. Despite the limits in terms of channels, the presentation doesn't suffer for it, ensuring the gunfire and other energetic sound effects have plenty of space to play, getting proper separation and placement. Music is similarly powerful, with the musical cues pumped out at an appropriate level in the mix.

The main extra on this disc is an audio commentary by pop-culture historian Russell Dyball, who offers a ton of trivia from the making of the film, discussing changes from the original script, settings and characters and influences on the movie, including a theory that this film borrowed for a major scene from the delightfully insane Never too Young to Die. Sometimes the dives are too deep, getting into areas of true minutiae (like the history of Streebek's preferred model of handgun), and the attempts at jokes are somewhat awkward, but in the absence of any production participants, the wealth of info and behind-the-scenes stories shared here will please die-hards and film geeks.

We do get to hear from at least one person who was on the set, in the 25:02 "A Quiet Evening in the Company of Connie Swain", as Paul offers her memories of Dragnet, discussing how she got the part, her experiences with Mankiewicz, Aykroyd and Hanks, and the story behind her character's famous prefix. Sweet and quite humble, she shares her current day thoughts on the film as well.

Also included is "Just the Facts!", a lengthy promo for the film, hosted by Aykroyd and Hanks (with Morgan providing narration.) Checking in at a hefty 45:59 and obviously aired on TV to push the film, it looks back at the original radio show, the television adaptation and the film version made for "the action ‘80s." Far from a fluff piece, despite its commercial intent, it's a great primer on the franchise and the stars it helped create, loaded with information for newcomers and fans. It would be great to see a modern film make something like this.

Wrapping up the bonus content, we get the film's theatrical trailer (1:41), and five TV spots (2:49), all of which are variations on the same moments in the film, with slight differences in approach.

The lack of any retrospective involvement on the part of Hanks, Aykroyd, or Zweibel is a big disappointment (the late Mankiewicz' absence is obviously unavoidable) but it's almost as big a let-down that this disc doesn't include the classic music video for "City of Crime", featuring Hanks and Aykroyd rapping and choreography from Paula Abdul. Shout! Factory couldn't get the rights to put it on this disc, and we are all poorer for it. Sure, you can find it online, but you used to be able to watch Filmstruck too. 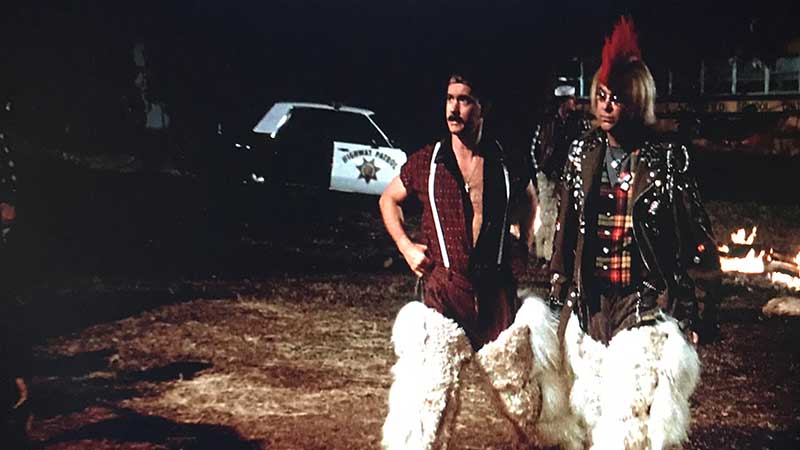 Dragnet isn't as funny as memory would suggest, with the third act giving itself over more to action than might be expected considering the tone until that point, but the teamwork between Aykroyd and Hanks is more than enough to ensure the film is a fun watch, with Aykroyd's take on the Joe Friday character walking a fine line in terms of cartoonishness. Shout! has done right by the film, delivering it in fine shape in its U.S. HD premiere, and added in a nice selection of bonus content, both new and archival, which makes this disc a must for fans, whether they enjoy the film or the stars.
Francis Rizzo III is a native Long Islander, where he works in academia. In his spare time, he enjoys watching hockey, writing and spending time with his wife, daughter and puppy.Follow him on Twitter