A horror remake worth making 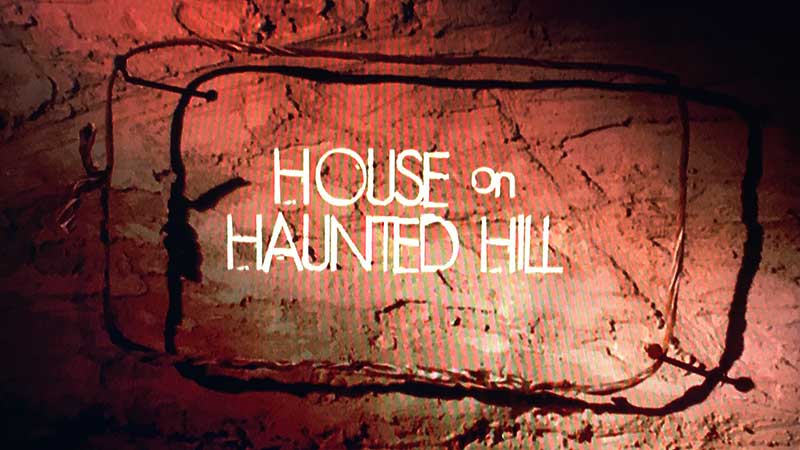 Note: Images are included for illustration purposes only and do not reflect the disc's quality.

In my opinion, remakes should be limited to a few select kinds of films: films 40 years or older (a somewhat arbitrary, yet lengthy amount of time) and terrible films. For the first group, enough time has passed that a new generation might want their own version of the story made for their tastes, for the second, why not try to correct the sins of the past than try to improve on greatness? House on Haunted Hill fell neatly into the first category, but definitely not the second. So to see William Malone give the idea of a rich kook throwing his spiteful wife a birthday party in a haunted abode earned no ill will from myself. That the result was well-made, fun, frightening and remarkably well-cast only made it more acceptable that the Vincent Price original get a new adaptation.

Theme-park provocateur Stephen Price (played with delicious mania by Geoffrey Rush) has a fun plan to get back at his awful wife Evelyn (Famke Janssen): instead of inviting the people she wants at her birthday party at the creepy house on Haunted Hill, he'll make up a guest list of his own. However, unseen forces decide to change the list, leading to a group of strangers taking up Price's invitation: survive the night on Haunted Hill, and get one million dollars. Of course, there's the slight detail that the house was once an insane asylum run by a madman that experimented on his patients, in which burned to death and has been deemed as cursed ever since. No big whoop.

The group of visitors trapped inside the house includes Sara, a resourceful woman who may not be who she says she is (Ali Larter), former baseball player Eddie (Taye Diggs), a wanna-be celebrity named Melissa (Bridgette Wilson), Dr. Blackburn (Peter Gallagher) and Pritchett, the owner of the house (Chris Kattan). Added to Rush and Janssen, they make up a fantastic cast, all of whom fill their roles well, particularly Kattan, whose squirrely performance is just right, and Larter, who manages to play a believable heroine who isn't suddenly a superhero when things go bad. Of course, without Rush, this movie wouldn't work, as his over-the-top ringleader sets the tone and gives the film an energy it needed to balance out the creepiness that sets in. 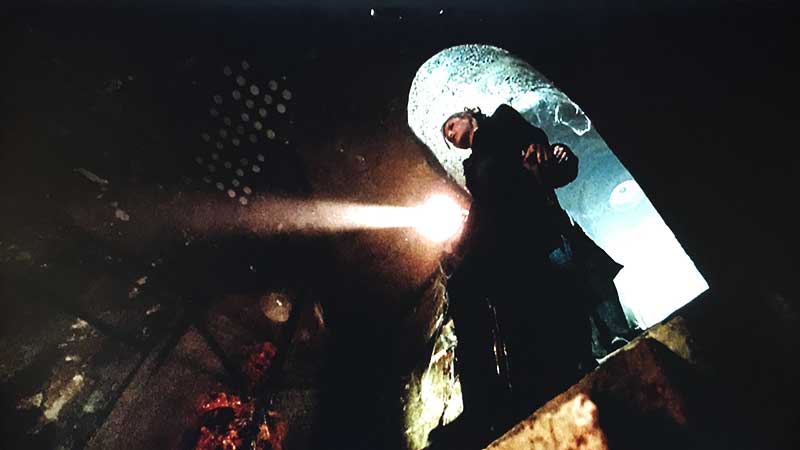 Speaking of which, House on Haunted Hill delivers a number of rather disturbing images along the way. No, it isn't Silent Hill horror (few things are that psychologically impacting) but it manages to frighten very well, with some surreal and off-putting moments of its own, accomplished through camera trickery and old-fashioned imagination, including some input from legendary effects master Dick Smith and the trio of Greg Nicotero, Robert Kurtzman and Howard Berger. There are a number of jump scares, but the film spends enough time building a foreboding atmosphere that they don't feel cheap. In fact, several are clearly telegraphed and yet still work, simply because Malone and company offer a few false starts, leaving you unsure if every dark shadow is actually hiding something. Meanwhile, ingenuity helps make for some surprising scares involving video cameras that still stand up well decades later.

Of course, as with most horror films, the happenings tend to rely on the protagonists abandoning all logic and ignoring survival instincts, which is pretty frustrating from the start. However, considering the crew is facing a rather malevolent supernatural force, staying together wouldn't have saved them and would have resulted in a pretty dull and quite short film, so we can be thankful they stupidly split up. Smartly though, the intrigue isn't reliant on human versus apparition combat, as twists and double-crosses abound, and the dead aren't the only danger the group faces. As a result, House on Haunted Hill is a one heck of a scary joyride, even if the gruesomeness and dark forces lean toward the predictable at times. 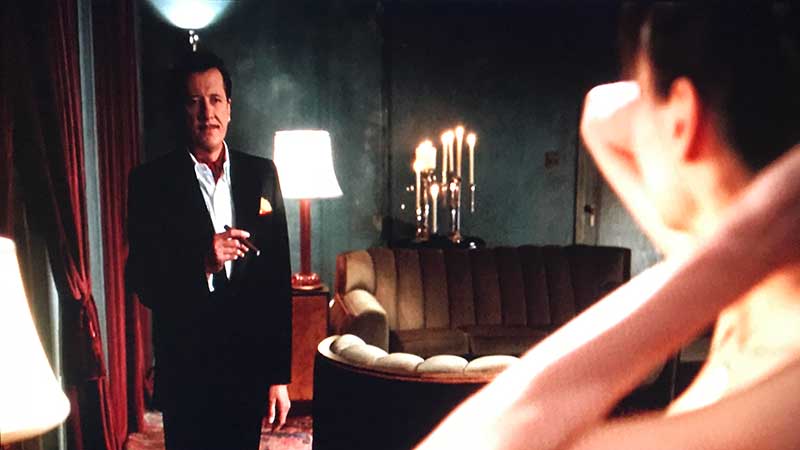 Shout! Factory subset Scream Factory brings the 1999 version of House on Haunted Hill to high definition on one Blu-ray disc, packed in a standard-width keepcase, which is held in a slipcover that repeats the new cover art, seen on the disc's two-sided cover (with the original text-heavy poster on the inside.) The disc features a static menu with options to watch the film, select scenes, check out the bonus features and adjust the set-up. There are no audio options, but subtitles are available in English.

The 1080p, AVC-encoded, 1.85:1 transfer on this release was struck from a new 2K scan of the original film elements, and the image is very impressive, with rich hues and a high level of fine detail. The thing is, the clarity and brightness of this presentation takes a bit away from the film's spookiness. Compare the film proper with the footage in the vintage special features, and the older clips are markedly darker and more obscured, which makes them a bit more frightening. This is especially true early in the film, before the scares really kick in, and the film looks downright glamorous. This is especially true during the daylight scenes at the theme park, which are crisp and clear, and stand in sharp contrast with the dismal settings later on. On the plus side, such a clean image--free of distortion, damage or digital distractions--does show off all the work that went into the special effects, with the deep black levels aiding in defining in the darkness. The film grain is steady and even, making for a quality look.

Presented via a DTS-HD MA 5.1 track, the sound on this film is a key element in building the creep factor throughout, as the surrounds get a ton of presence made up of head-turning moans and chanting, and moody music, with the pipe organ work being a particular stand-out, along with a rather high-energy montage early on that really gets the blood pumping. The unsung star of the show however is the low-end, which delivers a frequent rumble that underscores the horror at play, while a number of explosive effects get a boost from the bass. It's a sound design and execution that William Castle would be proud of.

Scream Factory has added a trio of new interviews for this release, under the banner "The Making of House on Haunted Hill". First up is Malone, who spends 37:30 discussing his most famous work, touching on his interest in the original film, the production process--including the writing, casting and effects, his use of practical effects and the technical aspects of the shoot. Malone's enthusiasm for the film is evident, and he has plenty to say about it, which makes for a very entertaining and informative piece.

Composer Don Davis (9:40) is up next, and he talks a bit more in general about the use of music in movies and how it's changed over the years, though he does get into the use of the pipe organ in this film and seems to suggest that he was or is unhappy about the use of Marilyn Manson's song early in the movie.

The last new interview is with Visual Effects Supervisor Robert Skotak (18:42), who gets into the work of designing the house and roller coaster for the film and expands upon how he achieved a number of the effects shots. This will be of great interest to those who enjoy the craft of practical effects.

Wrapping up the new stuff is a trio of automatic galleries, including "Concept Art and Storyboards" (2:58), "Behind the Scenes Visual Effects" (5:44) and "Movie Stills and Posters" (4:37). The highlights are seeing how the roller coaster scenes were created, in the visual-effects section and the international poster art versions )even if they didn't exactly attempt variety.

Most of the bonus content from WB's original DVD from 2000 has made the leap to this disc, including the well-made "A Tale of Two Houses". This 19:!4 featurette compares Malone's take on the story with the original, looking at the characters, the setting and the story, in an in-depth manner, including an introduction to William Castle, for those unaware of the director. This is no promo piece, as the plot is broken down and examined, right down to the finale.

"Behind the Visual Effects" (7:01) is also brought over from DVD, though with the new additions it's a bit redundant. Even so, it does go into detail on a number of effects scenes, which is always appreciated.

The four deleted scenes (two of which are versions of the same moment) and their introductions by Malone return (12:04), giving viewers a chance to meet Debi Mazar's character, who was cut from the film entirely, with explanations from the director as to why each scene was left out in the end. Worth a look to see how the film could have been a bit different (and more profane.)

Also included are the film's effective theatrical trailer (2:13) and a pair of quicker TV spots (1:05) for your viewing pleasure.

If you don't pay attention, you might miss that Malone's original commentary for the film is included on this Blu-ray, because it's under audio rather than the bonus menu. It's a solid track, with lots of info about the making of the film, including discussion of working with the cast, where he used optical shots and plenty of detail about production technique, though with the new interview, there's a lot of repetition. Watch the interview first before digging into this track.

If you own the original DVD, you'll probably want to hold onto it, as this disc is missing a handful of extras, including peeks at Malone's earlier film, Creature, an easter egg and a few featurettes and essays, as well as some DVD-ROM material. 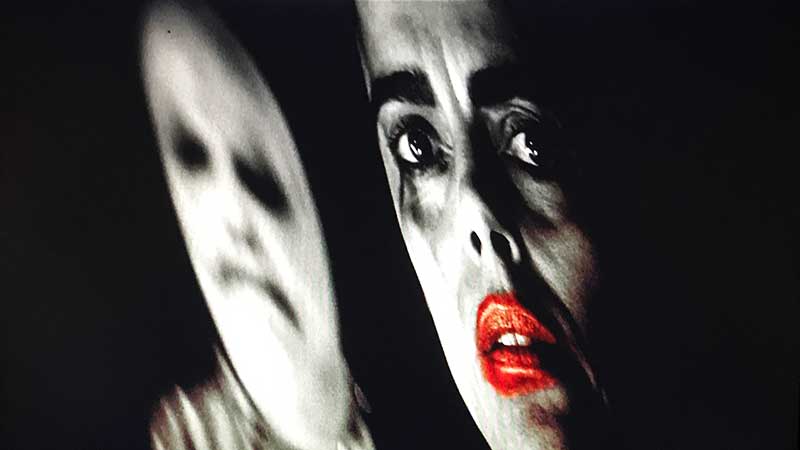 Upon rewatching the film, positive memories of House on Haunted Hill were quickly replaced by thoughts that the film might be a substandard Silent Hill, but then the ship righted itself and the stellar cast joined with impressive filmmaking to create a mostly creepy, sometimes funny, but eminently enjoyable horror film. Scream Factory has delivered the film in impressive condition, and loaded up on extras both old and new, to give fans a definitive, must-have package.
Francis Rizzo III is a native Long Islander, where he works in academia. In his spare time, he enjoys watching hockey, writing and spending time with his wife, daughter and puppy.Follow him on Twitter