Though probably few would admit it now, back in the late 1970s pretty much everyone not on a date or otherwise engaged on Saturday night tuned in to ABC's one-two punch of The Love Boat at 9:00 and Fantasy Island at 10:00pm. Though often unpardonably corny and melodramatic, The Love Boat was also daringly innovative from a production standpoint, and so tantalizingly glamorized and exoticized cruise vacations that it singlehandedly transformed that industry into the leisure industry powerhouse it is today.

Seen today, the series is quaintly charming, still. The show more or less peaked during this time, its ratings success prompting an elaborate on-location special episodes. Rewatching these shows after nearly 40 years, I was unexpectedly impressed by most of the regular cast members and the series' dizzying array of guest stars. And despite a lot of clever production cheats imperceptible to audiences of the time (most episodes appear to have been filmed entirely on soundstage recreations with back-projected vistas), it's still pretty incredible what the series managed to crank out on a weekly basis for nine straight years. 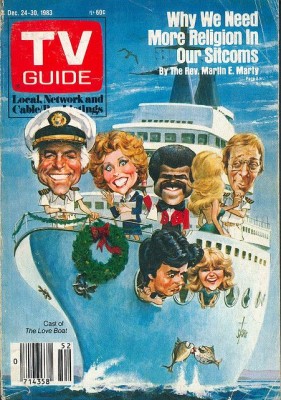 For the uninitiated, The Love Boat follows the mostly romantic-comedy adventures of both the passengers and crew aboard a cruise ship, usually but not always the Pacific Princess on its regular three-day jaunt along the west coast of Mexico. Most hour episodes are composed of three stories, written and directed by separate sub-units, resulting in some profoundly inelegant episode titles (e.g., "The Critical Success / Love Lamp Is Lit, The / Take My Boy Friend, Please / Rent a Family / Man in Her Life"). Typically, one of these would be broadly comic; one a trifle more serious involving a younger couple, played by actors associated primarily with series television; and a third featuring an older couple, usually played established Hollywood stars known primarily from movies, or older classic TV shows from the 1950s. One tale would end tragically or bittersweetly, while the other "serious" love story would teeter headlong toward total disaster until its inevitable happy ending. The series' regular characters ("Your Love Boat Crew") would intersect with these one-shot guest stars, and usually one cast member would play a major role in one of the three stories.

Though structurally similar to the sitcom anthology Love, American Style (1969-74), The Love Boat was unusual in myriad ways. It was, apparently, the last one-hour American sitcom to date, and the last series of any kind to feature a laugh track. The bulk of most episodes were actually filmed on dry land, on carefully recreated sets at 20th Century-Fox Studios in Century City. Based on the episodes watched for this review, it appears that roughly four out of every five episodes was shot entirely on soundstage sets, with second unit stock footage filling the gaps, while every fifth show or so was shot partly aboard a real cruise ship for exterior scenes. Obviously, offering Love Boat's biggest, more elusive guest stars a free cruise on top of their appearance fee was a pretty shrewd move.

In retrospect, the show's regular cast were integral to its success. Gavin MacLeod's Capt. Stubing was a bit of a disappointment after years of his entertainingly wise-cracking, self-effacing news writer on Mary Tyler Moore. Initially, Love Boat's producers fashioned him as a by-the-book taskmaster, but by season three he'd mellowed into more of a father figure, especially toward normally cheery, outgoing Julie McCoy, who faces a series of emotional crises throughout Love Boat's run. Earlier in the show's run, he adopts Shirley Temple-like Vicki (Jill Whelan), The Love Boat at its most outrageously precious. But by Season Four Vicki is now a pre-teen, and more believably interacts with the show's stories.

Fred Grandy and Ted Lange are entertaining as Gopher and Issac, but The Love Boat's real star was Bernie Kopell, a fact that the show's producers seemed to recognize: Kopell reportedly earned nearly $40,000/episode - huge money for a regular supporting actor in series television back then. His understated comic timing is really impeccable and his everyman appeal a real surprise for those of us who remembered him primarily as the broadly comic arch-nemesis Siegfried on Get Smart.

The appeal of the show is perhaps best exemplified by this season's second episode, a two-hour special filmed on location in the Virgin Islands, Curacao, and the Panama Canal. It consists of five sub-stories, populated by Love Boat's dizzying mix of talent. "A Marriage-a-Thon" cruise dreamed up by promoter-perennial loser Darren McGavin leaves long-suffering wife Debbie Reynolds ready to leave him for Captain Stubing. Meanwhile, Gopher is appointed a contestant judge, paired with babes Ann Jillian and Dawn Wells, much to horny Doc's chagrin. Elsewhere, forever engaged Rue McClanahan has just about had it with noncommittal boyfriend Ted Knight. Jilted Charlene Tilton turns to childhood friend Donny Most for comfort, but of course they're made for each other. And finally Peter Graves, the father of one groom (Brian Kerwin), teams up with the mother of his intended (Erin Moran), Kathie Browne, to stop the lovebirds from making a huge mistake, but end up falling in love themselves. (McGavin and Browne were married in real life, a working vacation if ever there was one.) Hokey as all this is, watching these guest stars having fun in their broad roles is a kind of guilty pleasure.

Presented in 1.37 full frame, The Love Boat: Season Four looks quite good, with an expectedly sharp image and good color. The Dolby Digital mono is strong for what it is, and English SDH are included on these region 1 sets.