MVD Entertainment Group // Unrated // October 9, 2018 // Region 0
List Price: $32.49 [Buy now and save at Amazon]
Review by Stuart Galbraith IV | posted October 31, 2018 | E-mail the Author
Hal Roach Studios produced many of the best short and feature comedies of the silent and early sound era. Roach's most successful films were the shorts and features starring Stan Laurel and Oliver Hardy, but his studio also boasted Our Gang (aka The Little Rascals), Charley Chase and others. Roach was a businessman, but making his comedies good was equally important. As he had done earlier with silent great Harold Lloyd, Roach nurtured his properties, favoring strong characterizations over broad slapstick. His was a small company with a family atmosphere, the "Lot of Fun," as it was nicknamed, his pictures distributed by bigger companies (first Pathe, later MGM and finally United Artists), and he gave artists like Stan Laurel (the main creative force behind Laurel & Hardy) much more freedom than the big studios would ever have allowed.

The great success of Laurel & Hardy in the last dozen months of the silent era prompted Roach to develop something like a "female Laurel & Hardy." First he attempted pairing Anita Garvin and Marion "Peanuts" Byron. Garvin was a frequent foil in Laurel & Hardy's universe, appearing in 11 of their films from the silent days through 1940's A Chump at Oxford (in the long version of that film only). In her prime Garvin was an extraordinarily sexy vamp-type; tall, leggy, and curvy with slicked-back jet-black hair. Byron, a good foot shorter than Garvin, was Buster Keaton's leading lady in Steamboat Bill, Jr. (1928). They appeared in two Roach comedies together, the second of which, A Pair of Tights (1929), is quite funny. But, alas, Garvin & Byron apparently didn't click with the moviegoing public. 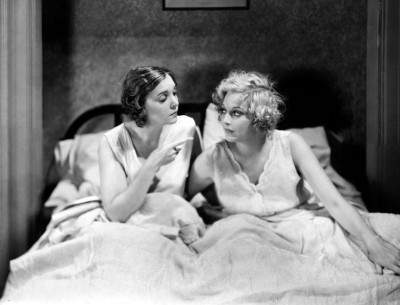 Roach tried again with another contrasting team. Roach briefly had Jean Harlow under contract, but she soon signed with Roach's distributor, MGM, and never looked back. Thelma Todd was something of a replacement. A talented comedienne, Todd had already appeared in supporting parts in other Roach comedies starring Chase and Harry Langdon, including the Laurel & Hardy classics Another Fine Mess (1930) and Chickens Come Home (1931). At the same time, she was beginning to get good parts in feature films, including the original film of The Maltese Falcon (1931, as Miles Archer's wife), and the classic Marx Bros. film Monkey Business (also 1931). Personally under contract to Roach, rather than the studio, he decided to team her with silent star Zasu Pitts.

Pitts, whose first name is sometimes written as "ZaSu" and correctly pronounced "Say-Zoo," had started in mostly silent one-reel comedies but also became a respected dramatic actress, best known as the female lead in Erich von Stroheim's 9 1/2-hour (initially) Greed (1924). For a time she continued making dramatic films, but her concurrent association with comedic films caused problems, most famously when, at early showings of Lewis Milestone's great antiwar drama All Quiet on the Western Front (1930), audiences laughed and Pitts was replaced.

Thelma Todd & Zasu Pitts: The Hal Roach Collection 1931-1933 presents all 17 of their short comedies, beautifully restored from their original negatives by Paul Gierucki and Cinemuseum. The two-disc set also includes audio commentaries and other extras.

The earliest shorts subtly exhibit signs that Roach was really thinking in "female Laurel & Hardy" terms, with Pitts rather dimly innocent like Stan Laurel's famous character, but quickly the shorts developed their own distinctive personality. Thelma was the curvy, urban, platinum-blonde head-turner, vivacious but also streetwise smart. Zasu was by contrast the naïve country girl at sea in the big city, a forever-fretting old maid completely ignored while all the men rushed to woo Thelma.

Essential to the success of Laurel & Hardy was their warm friendship, indeed a deep, childlike love for one another that kept them together, no matter how many times Stan might cause Ollie to fall into a trough of paint or off a roof trying to connect a radio antenna. Similarly, Todd and Pitts are opposites who are frequently annoyed with one another but who look after one another as best girlfriends do. This female (and pre-Code Hollywood) perspective is refreshing in a comedy universe dominated by men. Thelma's looks win them dates but the men are mostly clueless about or disinterested in her desires. Zasu, meanwhile, often gets into trouble because of her lack of worldliness, though sometimes finds an admirer of her own. (One of the early shorts sweetly pairs her with Guinn "Big Boy" Williams.)

The 17 shorts vary in quality, partly because there was never a consistent, assured guiding hand for the team (like Robert F. McGowan on Our Gang), and because Todd and Pitts didn't write their scripts or edit their films as Stan Laurel did on the Laurel & Hardy shorts. But familiarity breeds affection, and longtime fans of other Roach shorts of the era will instantly recognize Leroy Shield's iconic music cues and the many familiar Roach supporting players, many of whom shine in these shorts. (One example: in On the Loose Billy Gilbert plays an outrageously gay fashion designer in the typical Hollywood manner of the time, except there's a twist to his character that always gets a big laugh.) Laurel & Hardy themselves make a cameo appearance in one short, and Our Gang star Spanky McFarland is featured in another.

Pitts left Roach in 1933 for feature film roles, and an inspired Roach replaced her with Patsy Kelly, as different a personally as could be imagined. A self-described "dyke," openly gay Kelly was aggressive and wise-cracking to the point where she made Todd seem demure by comparison. Those 21 shorts are available on DVD via a different label, which released them earlier this year.

The popular series ended with the mysterious, never-solved death of Thelma Todd in 1935. Roach tried teaming Kelly with Pelt Kelton and Lyda Roberti, who also died young, in 1938. Ironically, Kelly and Pitts appeared together in the Roach feature Broadway Limited, a few years later, and Pitts would return to Roach lot one last time for the TV series The Gale Storm Show (1956-60), shot shortly before the studio was razed and the Lot of Fun was no more.

In 1.33:1 and black-and-white, the 17 shorts, sourced from the original 35mm nitrate camera negatives (and composites of other film elements by the looks of things) are stunning. Laurel & Hardy's concurrent shorts were overprinted through the years, and have required scads more work in restoring those, so seeing these shorts look and sound (in Dolby Digital mono) so good is a real treat. Region-free.

Supplements include expert (though occasionally a bit self-indulgent) audio commentaries by Richard M. Roberts, Laurel & Hardy authority Randy Skretvedt, Brent Walker, and Robert Farr. All are well worth listening to. Also included is a stills and poster gallery.

For anyone fond of classic film comedy, the Thelma Todd-Zasu Pitts shorts are an absolute must and a DVD Talk Collector's Series title.