Adventures of Hajji Baba, The

Twilight Time // Unrated // October 16, 2018 // Region 0
List Price: $29.95 [Buy now and save at Twilighttimemovies]
Review by Stuart Galbraith IV | posted November 15, 2018 | E-mail the Author
Ah, early CinemaScope. The widescreen format, having debuted with The Robe in September 1953, radically altered the movie-making landscape. The enormous box-office success of that and other initial CinemaScope titles resulted in a glut of spectacles during 1954-'55, movies intended to showcase the format's ultra-wide (initially 2.55:1) screen and four-track magnetic stereophonic sound. For a time, even a picture as profoundly silly as The Adventures of Hajji Baba (1954) was all but guaranteed to make money.

Recalling producer Walter Wanger's earlier success for Universal, Arabian Nights (1942), The Adventures of Hajji Baba similarly presents a fairy tale Middle Eastern adventure, minus elements of fantasy found in that and in Universal's subsequent follow-ups (Cobra Woman, Ali Baba and His Forty Thieves, etc.). It's not a good movie by any measure, but it's colorful with an intriguing backstory, and like the earlier Universal titles it has some amusing camp value. 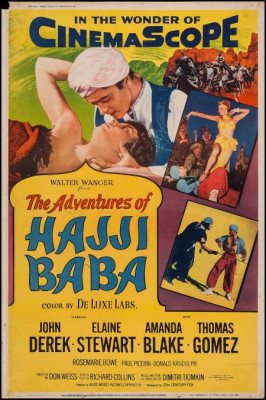 The production itself was quite unusual. Wanger had been a respected producer, but he was also famously paranoid in his personal life, convinced that his glamorous actress-wife, Joan Bennett, was cheating on him. In 1951, believing she was having an affair with her agent, future producer Jennings Lang, Wanger grabbed a pistol and shot him in the balls. Sentenced to just four months in the slammer, Wanger managed to keep his hand in production, albeit for lowly Allied Artists, the Poverty Row company having recently abandoned its old name, Monogram, in an attempt to spruce up its image. His films Kansas Pacific (1953) and Riot in Cell Block 11 (1954), both successful, spurred Twentieth Century-Fox into a multi-studio pact on The Adventures of Hajji Baba. Fox would provide 50% financing in exchange for overseas rights, an arrangement not uncommon today but a rarity then. The gamble paid off: the $800,000 production, modest by Fox's standards but expensive by AA's, grossed more than $2 million, turning a profit of nearly $700,000.

Loosely adapted from James Justinian Morier's popular The Adventures of Hajji Baba of Ispahan (1824), the film plays like every Arabian Nights-type cliché tossed into a blender and spit back out again. Barber Hajji Baba (John Derek) leaves his doting father (Percy Helton; his casting as Derek's father the closest the picture gets to all-out fantasy) to seek his fortune. Meanwhile, spoiled Princess Fawzia (Elaine Stewart), wanting to marry Nur-El-Din (Paul Picerni) against her father's wishes, effectively tries to elope, escaping the castle disguised as a boy, intending to rendezvous with escorts from his party.

She mistakes Hajji for her escort, but he agrees to take her to Nur-El-Din anyway in exchange for her priceless emerald ring. En route, they are captured by an army of fierce Turcoman warrior women led by Banah (Amanda Blake), who falls head-over-heels for Hajji, just as Princess Fawzia's icy demeanor begins to melt and she, too becomes attracted to the roughish scamp.

Emblematic of early CinemaScope productions, The Adventures of Hajji Baba has all the requisite empty-headed spectacle, but despite its lame script it's interesting for other reasons. For starters, the picture opens with the most anachronistic title song imaginable: a Dimitri Tiomkin-Ned Washington/Nelson Riddle-arranged ditty called "Haji Baba (Persian Lament)," sung by pop superstar Nat ‘King' Cole. Moreover, Cole's velvety voice turns up frequently in the film, like a soothing mantra, often at odd moments: "Hajji Baba Hajji Baba Hajji Baba." As great a vocalist as Cole was, the refrain is so overused that it becomes funny.

In movies of this type, a princess frequently disguises herself as a boy, and in the movies this disguise is never remotely convincing. Elaine Stewart, a strikingly beautiful former model, hides her long, very ‘50s-style hairdo under a turban, but that's about it. Her body shape never suggests anything other than an adult woman, and she even retains her long, manicured pink fingernails.

The campiness of Hajji Baba really kicks into high gear when the pair are captured by the Turcoman women, former slaves who distrust men, in scenes that anticipate Allied Artists later camp classic Queen of Outer Space (1958). Surrounded by luscious women (Rosemarie Bowe, Pat Sheehan, Joanne Arnold, Pat Lawler, Laurette Luez, all models, some having or soon to appear in Playboy), and competing with glamorous Princess Fawzia for Hajji's affections, Amanda Blake is hopelessly miscast. Freckly with pale skin, the redheaded Blake is wildly out of place in the unforgiving Persian desert, especially in the laughable, semi-revealing warrior woman costumes she's forced to wear. Blake, of course, would within a year land her career-defining role as Miss Kitty on Gunsmoke, a role she played for 19 of the show's 20 seasons, but in 1954 she was a struggling ingenue, appearing in bit parts in major films (A Star Is Born) and bigger roles in cheap movies (Miss Robin Crusoe, playing the title role). She was dubbed "the new Greer Garson" at one point, but in Hajji Baba she's more like Agnes Moorehead trying to vamp like Susan Hayward.

The supporting cast is good, with Thomas Gomez in a meaty role, and Claude Akins, both appearing in the picture's unusual pre-credits sequence. Stewart is serviceable and Derek gives a spirited performance. He's no Douglas Fairbanks, but he's a better actor than was genre star Jon Hall. As bland as the movie is, one imagines it was this film that won Derek the plum role of Joshua in DeMille's The Ten Commandments (1956).

Twilight Time's release of The Adventures of Hajji Baba sounds great and mostly looks good. Purists might object to the obvious digital scrubbing of the film, which leaves zero grain. Early ‘scope movies were notoriously grainy and surviving negatives generally have faded to magenta, requiring much digital restoration. The hues here are eye-pleasing but seem timed to modern tastes, lacking the garish vividness of those early ‘scope releases. Still, given the picture's obscurity it's a satisfying presentation, just not as outstanding as one might have hoped. The 5.1 DTS-HD Master Audio (2.0 audio is also available), adapted from the original 4-track magnetic stereo release is, however, terrific, while it especially enhances Tiomkin's fine score. English subtitles are available and the disc, a limited edition, is region-free.

The supplements include an isolated music track; a trailer; and Julie Kirgo's liner notes.

Though it's neither very good nor campy enough to appeal to that demographic, The Adventures of Hajji Baba is, nevertheless, an intriguing production that fans of that era of moviemaking will find worthwhile. Recommended.