Twilight Time // Unrated // October 16, 2018 // Region 0
List Price: $29.95 [Buy now and save at Twilighttimemovies]
Review by Stuart Galbraith IV | posted November 20, 2018 | E-mail the Author
As part of their multi-picture deal with Hollywood's Columbia Pictures, Britain's Hammer Films cannily co-produced Sword of Sherwood Forest (1960), with actor Richard Greene (also a producer here) reprising the career-defining starring in The Adventures of Robin Hood (1955-59), the British TV series popular in the U.S. and Canada as well as in Britain. By all accounts, the film was a minor success.

Hammer had already made one Robin Hood movie, Val Guest's The Men of Sherwood Forest (1954), in color but otherwise cheaply done; actor and later director Don Taylor starred in that. Hammer also had a long history of adapting television properties to film: the Nigel Kneale "Quatermass" shows, for instance, and in the 1970s their most successful releases were actually film versions of popular British sitcoms. This was a no-brainer.

Sword of Sherwood Forest is mild, pleasant entertainment, but little beyond that. The mix of Hammer talent with a handful of those associated with the earlier TV series doesn't quite gel, and the resultant film plays more like a really long, talky episode of the TV show, short on action, rather than Robin Hood a la Hammer, something laced with a little of the Gothic gruesomeness, though it's in color and "Megascope" (a variation of CinemaScope) to boot. 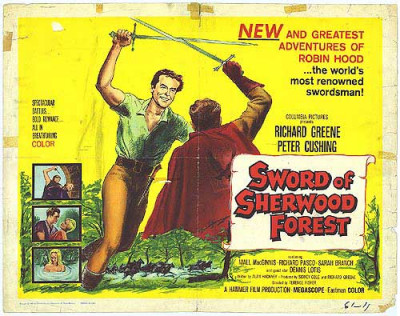 Over-plotted and needlessly confusing, the movie opens with a wounded man on horseback (future "Q" Desmond Llewellyn, uncredited) fleeing from soldiers working for the Sheriff of Nottingham (Peter Cushing). Saved by Robin Hood (Richard Greene), Little John (Nigel Green) and other Merry Men, the never-identified traveler says only a few words before eventually expiring, vaguely warning of danger in far-off Bawtry. In a disconnected subplot, the men also meet Maid Marian (Sarah Branch, quite fetching), who invites Robin to meet her at the Owl Inn, obviously a trap.

Robin, being Robin, goes anyway, and sure enough once there finds that Marian has set up an impromptu meeting between Robin and the Sheriff, who incredibly offers the outlaws a full pardon in exchange for the mysterious man's return. Fully aware of the Sheriff's lack of honor, Robin refuses. Meanwhile, he dispatches Friar Tuck (Niall MacGinnis, wildly miscast in a broadly comic relief part) to Bawtry while Robin's archery skills attract the attention of the Earl of Newark (Richard Pasco), who seems to want to hire Robin for an assassination plot connected to the unexpected appearance of the Archbishop of Canterbury (Jack Gwillim).

The movie was instead written by British novelist and humorist Alan Hackney, best remembered for his novel and screenplay for I'm All Right Jack (1959), a scathing satire of British trade unions and rampant corruption. Nevertheless, it still exhibits faint influences from the TV show. The Sheriff abuses his position of power to compel the innocent to "talk," is bereft of honor and basic decency. He and the other villains are hypocrites, believing themselves pious Christians while planning a murder inside a priory.

Richard Greene, a bit over-the-hill but matter-of-factly charming, is the only cast member from the TV show. That mattered little, as The Adventures of Robin Hood had innumerable cast changes during its four-season run (two Maid Marians, two Will Scarlets, two Alan-a-Dales, etc.) Tall, imposing Nigel Green makes an excellent little John, and pop star Dennis Lotis is surprisingly good if wasted as Alan-a-Dale. That the film was shot entirely in Ireland probably explains Niall MacGinnis's Friar Tuck. Like a sidekick in a B-Western, the part was beneath the actor's talents and he brings little joy to the part.

Oliver Reed also turns up, also miscast, as a foppish dandy, one of the Earl of Newark's co-conspirators. He's so out of his element that Hammer had all his reportedly lisping dialogue redubbed by another actor, but the uncredited voice actor only makes Reed's performance look worse than it probably was originally. For Hammer fans, the main draw is Peter Cushing, and he's excellent as the Sheriff of Nottingham, a more intellectual, mannered interpretation of the character. There's a kind of twist near the end involving his character. It's a surprise but adds nothing to the picture's effectiveness. Pasco and Gwillim are also better than the material.

Terence Fisher directed. He doesn't add much, either, as most of the picture's nice visual flourishes seem more the work of the second unit rather than Fisher. There's surprising little action, probably yet another influence of the TV show, which didn't have the budget for much beyond small-scale skirmishes. The film doesn't look cheap, but it is small in scale and ambition.

Twilight Time's release of Sword of Sherwood Forest, licensed from Sony/Columbia, has awfully grainy dissolves but otherwise looks fine, and it's fun to see this on a big screen. The DTS-HD Master Audio mono is okay. English subtitles are available and the disc, a limited edition, is region-free.

The lone supplements are a trailer; and Julie Kirgo's usual liner notes.

One of those rainy-afternoon-movies-with-the-kids, Sword of Sherwood Forest is just okay, though Hammer completists will want to pick it up. Recommended.