Paramount // Unrated // November 6, 2018
List Price: $22.99
Review by Stuart Galbraith IV | posted December 4, 2018 | E-mail the Author
The excellent television legal drama The Good Fight returns for its second season on DVD, the series already having been renewed for a third one next year.

As I explained in my review of Season One, my wife, Yukiyo, was a binge-watching fan of The Good Wife, the 2009-2016 legal drama that had preceded it, the series starring Julianna Margulies. On her days off from work her eyes would be glued to her laptop for hours, watching five or six episodes, one after the other. I only caught bits and pieces of that show, but then the first year of The Good Fight fell into our unloved DVD screener pool and I grabbed it, mainly so that she could watch it.

I'm glad now that I did, because The Good Fight turned out to be a very smart and even boldly political series exploring controversial, ripped-from-the-headlines topics in the Trump era. The very first shot of the first first-season episode, in fact, begins with footage of Trump's inauguration, with powerful Chicago attorney Diane Lockhart (Christine Baranski), slack-jawed with disbelief. In Season Two, Trump becomes an even bigger part of the drama, his image, along with Vladimir Putin's (and others in some episodes) a part of the clever main title design.

I'd never watched more than a five-minute stretch of The Good Wife, so the wife lets me know when the series references other characters and storylines from that earlier show. Even without that help, however, I was very quickly hooked by its interesting and amusing characters, and its crackling storytelling skill. 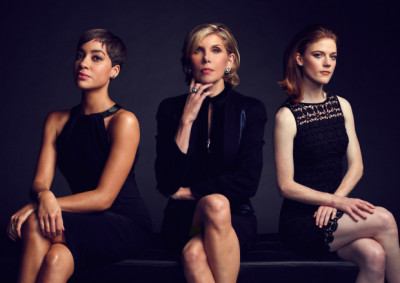 The new season opens with the funeral of founding partner Carl Reddick (Louis Gossett Jr.). His death creates an opening for Liz Lawrence (Audra McDonald), Reddick's daughter and a U.S. Attorney ousted from her job after writing an unflattering Tweet about Donald Trump. She's invited into the firm as a name partner to preserve the firm's name and reputation, but she's also the ex-wife of Adrian Boseman (Delroy Lindo), the firm's leading name partner.

As before, Season Two is consistently outstanding, its teleplays exploring topical legal issues, underpinned with political content while at the same time questioning the ethics of the cash- and image-obsessed firm. Indeed, a major story arc this season involves a series of murders committed against Chicago lawyers by their apparently financially ruined clients. ("Kill All Lawyers" becomes almost a slogan for the new season.) Topics explored in this round include the shooting of blacks by white cops, domestic terrorism, fake news, the culpability of reality TV shows for sexual assaults, racism in charter schools, and, intriguingly presented, even the mid-term elections (still in the future when the show aired) and the possible eventual impeachment of Donald Trump.

Such plotlines are as timely as all get-out, all the more impressive considering that the episodes aired (were uploaded?) March-May of 2018.

The cast is excellent, particularly the three leads: Baranski, Jumbo, and Leslie; and Lindo and Nyambi Nyambi, he playing firm investigator Jay Di Persia, initially at odds with Marrisa Gold (Sarah Steele, another carryover from The Good Wife), as Diane's assistant.

CBS/Paramount's DVD of The Good Fight: Season Two is a 4-disc set of all 13 episodes (up from the previous season's 10), averaging 49 minutes apiece, the advantages of non-network 42-minute running times not an issue. (The use of explicit profanity and nudity where dramatically called for is also refreshing.) Presented in 16:9 enhanced widescreen with an aspect ratio of about 1.85:1, the series looks great and the Dolby Digital 5.1 mixes are up to current TV standards of excellence. Optional English subtitles are provided on this Region 1 set.

Supplements include deleted scenes and a gag reel.