Arrow Features // R // November 27, 2018
List Price: $34.95 [Buy now and save at Amazon]
Review by Stuart Galbraith IV | posted December 17, 2018 | E-mail the Author
When it was released in 2001, Robert Altman's Gosford Park was generally likened to the lush, stately Agatha Christie-type mysteries of past decades, movies such as Sidney Lumet's classy, clever film of Murder on the Orient Express (1974), in this case tailored to Altman's signature ensemble filming style.

Today, however, Gosford Park much more clearly plays like a dry run for screenwriter Julian Fellowes's later hit television series (and upcoming movie) Downton Abbey (2010-2015). That TV drama was originally intended as a direct spinoff from Altman's film and while that didn't happen, there are many obvious similarities, most obviously the presence of actress Maggie Smith in both, playing the same character in all but name.

The murder-mystery aspects of Gosford Park, while certainly present, aren't what drives the story, and indeed play a minor role in things overall. The murder occurs fairly late in the film, and the police inspector that comes to investigate (played by Stephen Fry) is a relatively minor character and clearly out of his depth. He never figures out whodunnit, though the audience does before the end.

Rather, Gosford Park is much more concerned with the relationships between the upper-class and servant class characters and, to a lesser extent, the culture clash of British and American characters, as well as in contrasting historically authentic aristocratic traditions with Hollywood-imagined ones.

It's also fascinating to compare this to Downton Abbey which, while undeniably compelling entertainment, "borrowed" innumerable characters and situations from the seminal 1971-75 ITV series Upstairs, Downstairs, and which is far more sympathetic of British aristocracy than either that series or Altman's movie, presumably a reflection of Fellowes's conservatism. 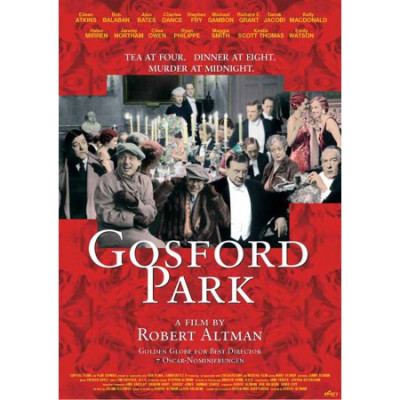 An ensemble piece set in 1932 and with 26 major parts and as many minor ones, its story takes place at the English country estate of industrialist Sir William McCordle (Michael Gambon), who lives there with his much younger wife, Lady Sylvia (Kristin Scott Thomas), and their unhappy daughter, Isobel (Camilla Rutherford).

The movie runs 130 minutes but probably should have been closer to three hours. So constant is the whirlwind of activity it's basically impossible to keep track of everyone's place in this setting, and their relationship to one another. For instance, though frequently glimpsed dashing about or referencing notes from a clipboard, Helen Mirren's housekeeper would seem a great waste of the great actress's talents, until she has a big scene near the end when the film is nearly over. Gosford Park lacks the more methodical pacing of earlier Altman films like Nashville and Short Cuts, which allowed audiences a much better, deeper understanding of all those characters. But Gosford Park does pack a lot in.

As with Downton Abbey, the film meticulously and authentically captures details of life in service, little things movie audiences may be surprised to learn. For instance, below stairs visiting servants are addressed not by their Christian name but rather by their master's surnames while staying there, presumably to avoid confusion. Or that servants traditionally do not serve breakfast, hence the buffet-style meals always seen in movies and TV shows.

However, unlike Downton Abbey, which frequently portrayed those above stairs as benevolent masters, unhesitant in their financial support of cooks needing expensive eye operations or the legal fees of those accused of high crimes, Gosford Park's characters are more realistically insensitive and callous in big and small ways toward the servants catering to their every whim. Mirren's character boasts of being the perfect housekeeper because she has no life beyond servitude. And the murder that occurs is a revenge killing motivated by tragedy that ruined several servants' lives, and yet the privileged-class murder victim that caused so much suffering, it's implied, would hardly have remembered the deed.

The movie crams so much into its running time that it's basically impossible to keep track of everything going on. There are hints of anti-Semitism and homosexuality so briefly referenced blink-and-you'll-miss them. The American played by Bob Balaban is an amusing fish out of water, dazzled and intrigued by the pomposity and all its traditions. His producer character is fictitious, though the picture he's preparing, Charlie Chan in London, is not, though made later than the film suggests. Conversely, Jeremy Northam is notably authentic as Ivor Novello, best remembered today for his two early Hitchcock roles (in The Lodger and Downhill) though in fact he was primarily a songwriter-performer, several of which he sings during the film.

Stephen Fry's inspector is an amusing imitation of another sort: his police detective is instantly recognizable as an English variation of Jacques Tati's Monsieur Hulot, right down to the pipe, hat, and Fry's movements. It's not exactly appropriate to the setting, but it is funny.

Arrow's Blu-ray presents the film in its original 2.35:1 aspect ratio, the film having been shot in Super 35. The lush cinematography looks great on big projection systems, the transfer having been done in 4K sing the original camera negative. The DTS-HD Master Audio 5.1 and LPCM 2.0 are up to current standards, and optional English subtitles are offered on this Region "A" encoded disc.

As usual for Arrow, Gosford Park is packed to the gills with supplements, some repurposed from earlier home video releases, some new. They include no less than three audio commentary tracks, one with Robert Altman, Stephen Altman, and David Levy, the second with Julian Fellowes, and the third (new to home video) with Geoff Andrew and David Thompson. Also included are new interviews with executive producer Jane Barclay and actress Natasha Wightman (playing one of the guests); deleted scenes and a trailer (both in high-def); and archival featurettes: "The Making of ‘Gosford Park,'" "The Authenticity of ‘Gosford Park,'" and "Cast and Filmmaker Q&A Session," with a combined running time of about an hour.