Story from Chikamatsu: Criterion Collection, A 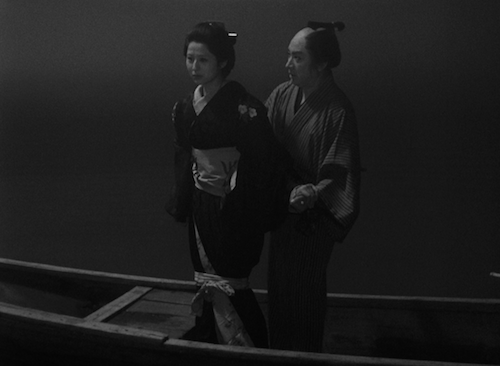 Kenji Mizoguchi's directing career started in the silent era, but he's best known (at least in the West) for his late-career gems, Ugetsu and Sansho the Bailiff. Made shortly after those films, 1954's A Story from Chikamatsu (aka The Crucified Lovers) is no less impressive, even if it is not as well known.

The key traits of Mizoguchi's filmmaking are front and center. This adaptation of 18th-Century puppet theater playwright Chikamatsu touches on Mizoguchi's pet theme of Japanese society's unfair treatment of women, which the director and his cinematographer, Kazuo Miyagawa, realize in a series of carefully choreographed shots that consistently create a sense of depth within the confines of the Academy-ratio frame. Imbued with a sense of melodramatic fatalism and high tragedy from its source material, Mizoguchi crafts a film that is visually exquisite while constantly exercising formal (and sensual) restraint.

Early in the film, we are shown the precarious place that a married woman can find herself in, as an adulterous couple are paraded through the streets of Kyoto before being crucified for their affair (the "better" alternative, we are told by some gossiping characters, is that the husband should have killed the wife without having to bring legal officials into it). This omen arrives before we even know exactly whose fate is being foretold.

Our doomed lovers turn out to be Osan (Kyoko Kagawa), the young wife of an old miserly scroll maker, and Mohei (Kazuo Hasegawa), a talented and somewhat idealistic assistant in the scroll maker's employ. Mohei attempts to forge a loan note, so that Osan can get her brother out of debt -- unsurprisingly, Osan's stingy husband will not offer the money freely himself -- but Mohei is caught. He escapes, but not before being glimpsed saying goodbye to Osan. They're not having an affair (yet), but circumstance trumps truth, and Osan decides to run away too. Osan and Mohei find each other on the road, and as they continually evade the hired men looking for them, they realize they are now bound together forever.

In the film's emotional and visual centerpiece, the duo row a boat out into the middle of a foggy lake, with the intention of drowning themselves to end the torment. Mizoguchi films the scene so that all signs of the shore or any distant trees are indistinguishable. It's just these two people in the liminal space of the boat. And it's this secluded space, while prepping Osan to go overboard, that Mohei finally reveals he has always been in love with her. She is overcome. He is overcome. Now they no longer want to kill themselves.

The social politics of Japanese society are satirized and condemned in the parallel story of Osan's husband, Ishun (Eitaro Shindo), whose search for the missing lovers is motivated purely by a need to save face and maintain his power and financial standing. The film's most subversive suggestion is that being punished by and cast out of such a twisted system is a spiritual relief.

That's a lot to chew on, but A Story from Chikamatsu is not a dauntingly heavy watch. The style and performances are emotionally engaging and will suck you right in. It's absolutely gorgeous. 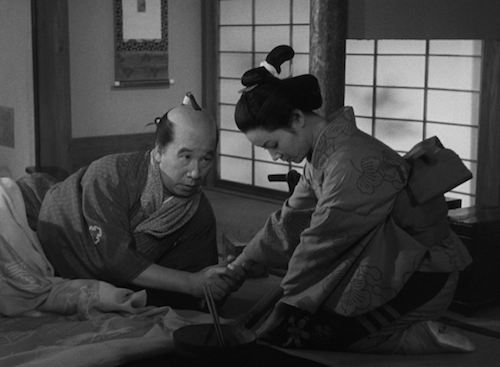 The Blu-ray
A Story from Chikamatsu is packaged with a fold-out pamphlet, including an essay by Haden Guest.

The Video:
Credited as being sourced from a new 4K restoration, the AVC-encoded 1080p 1.37:1 transfer included here is exemplary. Clarity is strong, with pleasingly resolved film grain and consistent density throughout. Contrast is subtly delineated, with strong shadow detail that doesn't sap the blacks of their richness. No noticeable damage or intrusive digital encoding issues. Top-notch!

The Audio:
A beautiful restoration on the audio too. The Japanese LPCM mono audio (with optional English subtitles) sports no distracting evidence of damage or wear. The soundtrack is relatively sparse, but the contrast between the dialogue and the theatrically-inspired atmosphere and music is well-delineated.

(HD, 10:52) - A newly recorded interview with Story from Chikamatsu's lead actress, discussing her experiences on the film. She talks about being upgraded from a supporting part and her nerves in dealing with director Mizoguchi's method of breaking down actors to get the lifelike reactions he wanted.

Final Thoughts:
Though it hasn't really gotten its due in the West, A Story from Chikamatsu is another exquisitely crafted and deftly told masterpiece from Japanese master director Kenji Mizoguchi. Criterion more than satisfies viewers in the A/V department too. This is one to savor. Highly Recommended. 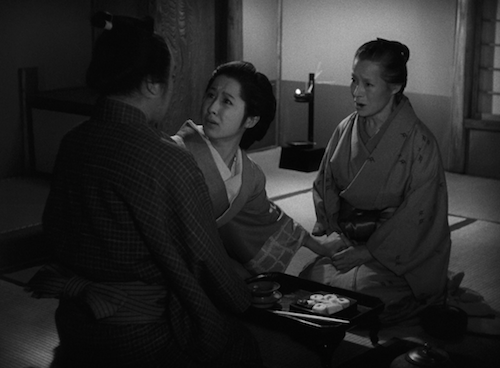