Arrow Features // R // December 4, 2018
List Price: $22.97 [Buy now and save at Amazon]
Review by Stuart Galbraith IV | posted December 24, 2018 | E-mail the Author
Let's give Swedish filmmaker Ingmar Bergman some credit: given a big budget for his first (and only) "Hollywood" production, he did anything but sell out and make something frivolous like, say, a Smokey and the Bandit movie. Indeed, The Serpent's Egg (1977) is one of Bergman's most relentlessly dark and disturbing features. Set in 1920s Berlin, during a time of rising anti-Semitism and runaway inflation (a beer will cost you a billion deutschmarks), the setting becomes German Expressionist Hell on Earth. Though regarded as one of Bergman's lesser works, the look of the film is mesmerizing if not exactly an ideal date movie. Watching Arrow's Blu-ray, I was particularly struck by how obviously this must have been a major influence on Adrian Lyne's 1990 film (written by Bruce Joel Rubin) Jacob's Ladder, which clearly emulates it in myriad ways. Surely I'm not the first to notice the connection? 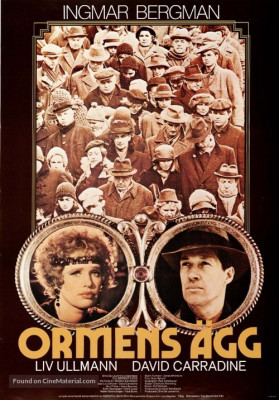 The story concerns Jewish American and alcoholic expatriate Abel Rosenberg, an unemployed trapeze artist unable to work because of his drinking. Matters get worse in the opening scene, when Rosenberg discovers the body of his trapeze partner brother Max in their Berlin apartment, blood everywhere after a self-inflicted gunshot to the head. After being questioned by police Inspector Bauer (Gert Fröbe), Rosenberg visits a seedy cabaret where Max's ex-wife, Manuela (Liv Ullmann) performs, breaking to her the news. Together they attempt to read Max's mostly illegible suicide note. All they can make out is "There is poisoning going on."

Manuela, clearly in love with Abel, has him move in with her, but his drinking and Jewishness run afoul of the landlady. They're evicted, and he's upset to learn that, to eke out a living, she works a second job as a daytime prostitute. Eventually one of her lovers, Dr. Hans Vergérus (Heinz Bennet), finds them employment at his hospital, Rosenberg as a clerk in a massive archive dating back centuries, and Manuela as a cook. However, their lives only deteriorate even further: they no longer have sex, become irrational and irritable toward one another, are still nearly starving to death and feel sick all the time.

At this point, late in the film, The Serpent's Egg makes a wild left-hand turn into what by definition could be labeled science fiction, with Bergman's script heavily influenced by the Fritz Lang's German-made Doctor Mabuse films, particularly aspects of The Thousand Eyes of Dr. Mabuse (1960). The presence of Goldfinger actor Gert Fröbe, who played a police inspector in Thousand Eyes and two of its sequels (as Inspector Lohmann, a character "away on an important case" during the events in The Serpent's Egg, we're told) hints at this early on. Bergman enthusiasts expecting something like an English-language Persona or Cries and Whispers were, perhaps understandably, bemused by The Serpent's Egg third act bushwhacking.

The film most impresses with its extravagant recreations of 1920s Berlin, a time of hyperinflation so bad the value of currency is eventually measured not by its printed value, but by its weight. Though distributed in the U.S. by Paramount, The Serpent's Egg was, primarily, a co-production between Dino De Laurentiis's company and West Germany's Rialto Film. Bergman moved there during this time for tax reasons. Its budget is unknown to this reviewer, but may have been in excess of $5 million, certainly equal the cost of many ordinary Bergman movies combined. The period detail and nightmarish set design could not have been cheap, and the repressive industrial look of the film, not unlike David Lynch's concurrent Eraserhead, alone makes the film worth watching.

Mainly, The Serpent's Egg seems to be a cautionary tale about sinister forces that, in this case, anonymously predate by a decade yet predict the more traceable rise of Nazism and the Final Solution that soon followed. The characters in Bergman's film dismiss or feel helpless in a country in a state of subdued panic, a country that seems on the verge of complete collapse and total chaos, the far-right of which are already blaming the Jews for their troubles. Fröbe's sympathetic inspector closely monitors (on the radio, in the newspaper) the actions of a young Adolph Hitler and his Beer Hall Putsch (failed coup attempt) that landed him in prison for treason. The policeman expresses relief near the end (whew, that was close) that it failed so spectacularly and that German democracy functioned exactly as it was supposed to. Needless to say, the movie audience is fully aware how it all turns out in the long run, but unlike the clunky irony of Stanley Kramer's Ship of Fools (1965) ("There are nearly a million Jews in Germany. What are they going to do? Kill all of us?"), somehow the foregone conclusions in Serpent's Egg resonate more believably.

Reportedly, Elliot Gould, Dustin Hoffman, Peter Falk and even Robert Redford (!) were among those considered to play Rosenberg. David Carradine would seem an odd choice, too, but he's actually not bad, capturing an essential component of the character others would likely have missed, a kind of enigmatic fatalism. His outwardly non-reactive expressions at the very end of the film, almost like a newly-liberated concentration camp survivor, somehow seems entirely apt.

Sourcing a transfer apparently made by MGM, Arrow's Blu-ray curiously arrives almost simultaneously with Criterion's release, part of its big brick of Bergman titles collected in one huge set. I'm not certain these are different transfers or the same root transfer tweaked differently, nor have I seen the Criterion version, but Arrow's presentation generally is quite satisfying, the color and detail approximating and in some respects surpassing original 35mm release prints. Region "A" encoded, the disc presents the film in its original 1.66:1 theatrical aspect ratio, with a decent LPCM mono track, with English and German dialogue only, supported by optional English subtitles.

Arrow's MGM licensing deal would seem to include an arrangement to repurpose their extra features, so the release mostly does that rather than Arrow's usual glut of new material. Supplements here consist of: "Bergman's Egg," a new appreciation by Barry Forshaw; a commentary track by David Carradine (who died in 2009); "Away from Home" and "German Expressionism," archival pieces featuring Carradine and Ullmann in the former, writer Marc Gervais in the latter; a trailer and photo gallery.

Loathed by some, The Serpent's Egg is unloved even by many Bergman's admirers. I found it a rather fascinating departure if despairing and not entirely successful, though generally excellent. Highly Recommended.