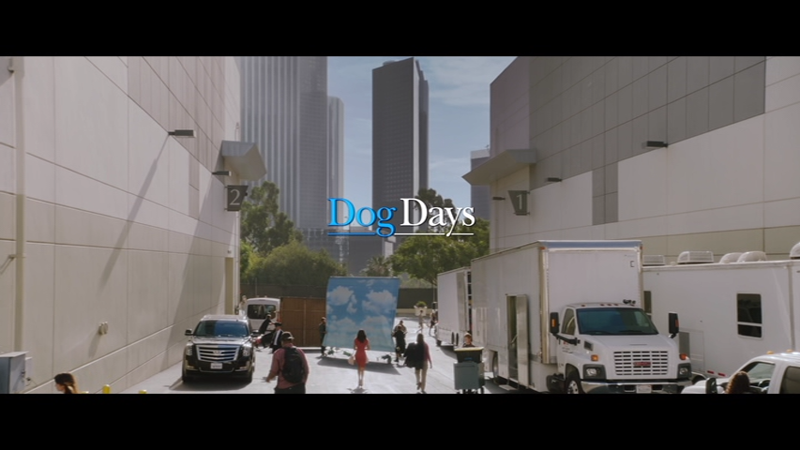 Loves: Dogs, so much of the cast, The State
Likes: A good rom-com
Dislikes: BEing disappointed by my favorites
Hates: Being emotionally manipulated, dogs in distress

It seems like a solid idea for a crowd-pleasing movie: populate an large ensemble romantic-comedy with lots of dogs and very funny people, under the direction of The State's Ken Marino, who gave us last year's modestly-received How to Be a Latin Lover. In practice, it isn't as funny as you might expect considering the names in the cast, but there's nothing wrong in comparison to your average rom-com, with all the regular beats hit, including musical montages, last-gasp attempts at romance, nice-guy friends who want to be more and rash reactions to misunderstandings.

There's a lot going on plot-wise in Dog Days, with the characters' lives all intersecting in various ways, some more directly than others. The main stars are Elizabeth (Nina Dobrev) and Tara (Vanessa Hudgens). Elizabeth is the host of a popular morning television show, and she recently caught her boyfriend cheating on her, which she claims has traumatized her dog Sam, leading her to take him to a dog psychologist (Tig Notaro in a brief, but entertaining role.) Tara is a local barista looking for her next step in life, hoping it will be with the hunky vet across the street (Michael Cassidy), but she instead gets involved with a stray Chihuahua and the awkward owner of a nearby dog rescue (Jon Bass). 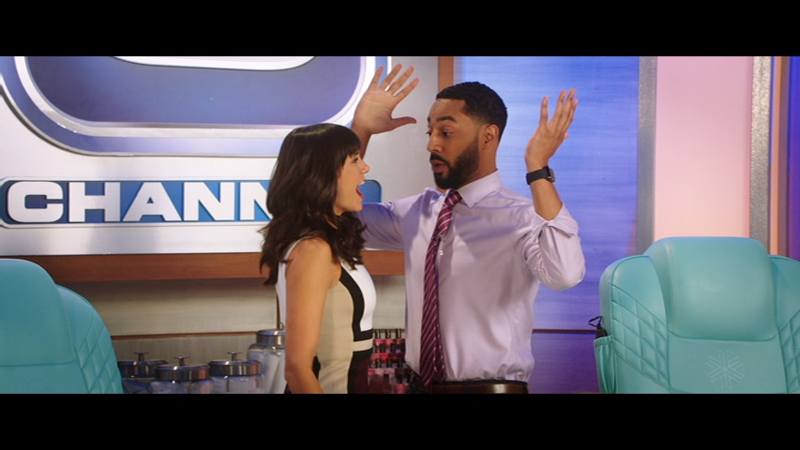 Meanwhile, would-be musician Dax (Adam Pally) is recruited to dog sit for his new-parent sister and brother-in-law (Jessica St. Clair and Thomas Lennon), which is a problem since he is A) lazy and B) living in a place that doesn't allow dogs. And then there's Grace and Kurt (Eva Longoria and Rob Corddry), whose efforts to help their newly-adopted daughter adjust to family life are helped by finding an adorable stray pup, who actually belongs to Walter (Ron Cephas Jones), a widower who is searching for his lost dog with the help of the pizza delivery-boy who caused the dog to run away (Finn Wolfhard). If that wasn't enough, there's a battery of additional characters in these main folks' lives, including the very likable Tone Bell as Elizabeth's new co-host and potential love interest, the always-funny Lauren Lapkus as Tara's dog-walking pal, and Party Down star Ryan Hansen playing Elizabeth's ex (who looks confusingly similar to the vet.)

That big a cast requires a lot of juggling in order to not leave a storyline on the sideline for too long, which makes crafting proper pacing a difficult task. Watching the film, I never found myself wondering where a character not on-screen was or what they were doing, so one would say that it all seems to work, though having near-constant dogs around and some entertaining smaller characters filling gaps (like David Wain popping up in an enjoyably weird cameo or Jessica Lowe's funny hairdresser) certainly helped keep things rolling along. It also doesn't hurt that the least-engaging characters are less of a focus, though arguably, the storyline of Elizabeth and Tone Bell's former NFL player, which is the film's backbone on the human and dog fronts, doesn't intrigue the way other portions of the film do. Part of that is likely because they are the most romantic pairing in the film, whereas most of the others are comedy-first.

But even with a cast bursting with comedic talent, the film is only intermittently funny (Wain's cameo easily draws the biggest laughs of the movie.) Certainly scenes between St. Clair, Lennon and Pally work (three people this funny being together is a guaranteed good time) and Lapkus and Lowe snipe jokes in their minor roles, but the film is more earnest about its story than might be expected from a writer and director of the terrific The Bachelor parody Burning Love but unfortunately frequently as funny as you might expect from the minds behind The Ten. If it wasn't for the adorable dogs and the goodwill brought along with the cast, this would be just another rom-com on the pile. As it is, it's slightly better than that, but not as good as you'd hope. 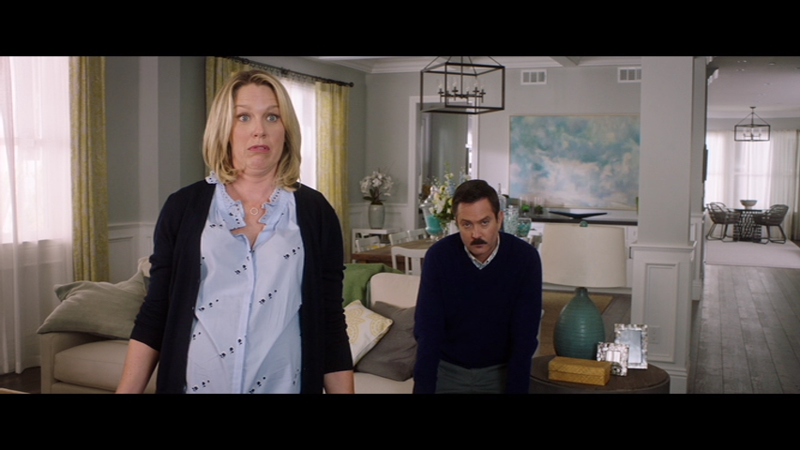 Though you can find a packaging shot of a Blu-ray release online, no such beast exists, leaving this DVD as your only physical-media option for Dog Days. The disc arrives in a standard keepcase, with a static anamorphic-widescreen menu offering options to watch the film, select scenes, adjust the languages and check out the non-existent extras. Audio options include Dolby Digital 5.1 English and English Descriptive tracks, while subtitles are available in English and Spanish.

The anamorphic-widescreen 2.40:1 transfer on this disc is about as good as you can hope for from a standard-definition release, aided by a film that is sunny and colorful for most of its runtime, resulting in a crisp, clean image that's well saturated and sports a solid level of fine detail. Even in low-light (in those limited moments) the film looks good, without any notable issues introduced in the transition to digital.

As with most romantic comedies, the focus here is on dialogue, and there are no concerns there, as the center channel handles the bulk of the work, with some echoing in the surrounds, while the film's score and soundtrack cuts (as heard in the montages) get enhancement in the side and rear speakers, where atmospheric effects fill out scenes (particularly those in public settings.) The low end doesn't have a great deal to do during the course of the film, offering some support to the music.

Not a dang thing. 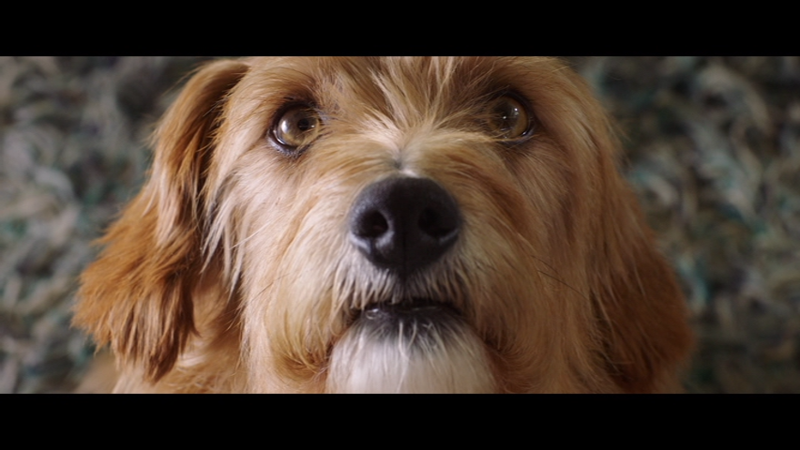 Dog Days is a pretty basic rom-com enhanced by two things: a whole lot of dogs and a top-notch cast of comedy stars. However, if you couldn't watch the ensemble holiday films of Garry Marshall, the presence of pups and sure-thing comedic actors won't put this one over for you. The film looks and sounds fine on SD DVD, but there are no extras to be had, so if you don't love this flick, owning this disc won't be a top priority. Fans of The State, Happy Endings, comedy podcasts and doggies, have plenty of reason to want to check it out though. For what it's worth, my wife and daughter joined me part way in, and they both truly enjoyed the film.
Francis Rizzo III is a native Long Islander, where he works in academia. In his spare time, he enjoys watching hockey, writing and spending time with his wife, daughter and puppy.Follow him on Twitter