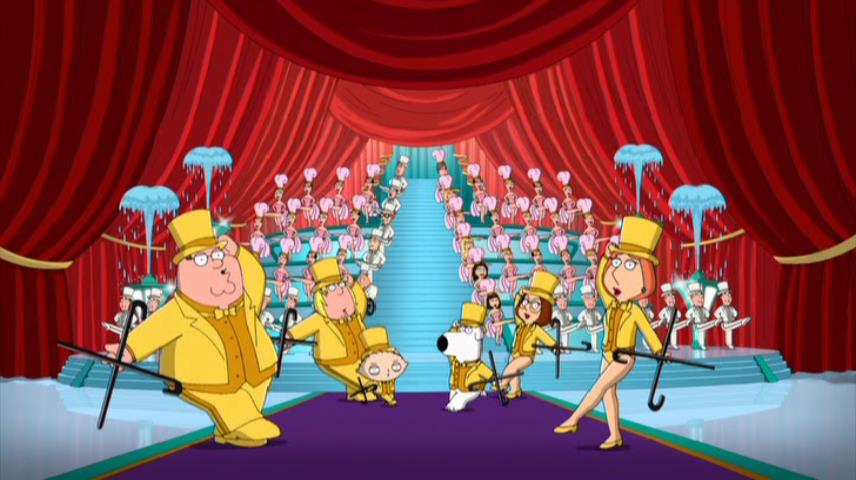 It would have seemed unlikely that Family Guy, cancelled from network TV after 3 seasons, would end up celebrating its 20th anniversary, but indeed it has. The animated series owes a lot to DVD for its success and rebirth, as the season sets released after its cancellation sold so well that it was soon picked up again. Being one who can't stand the presentation of broadcast TV since the late 90s, this was how I discovered it as I was buying just about everything that came out on DVD at that time. At first glance, it looks like just an animated parody of family sitcoms- Creator Seth MacFarlane voices oafish Peter Griffin, the head of the family, as well as infant son Stewie who is far smarter than his age and dog Brian who at times is the smartest member. (It's just a given that the baby and dog can talk- it's a cartoon after all.) Wife and mother Lois is voiced by Alex Borstein, insecure teenage daughter Meg by Mila Kunis, and dim-witted son Chris by Seth Green. All of them also provide the voices for a number of other characters. Peter is supposed to be dumb, obnoxious but nevertheless loveable- I personally haven't cared too much for him and he's one reason why I don't follow the series very closely. The main draw of the show however hasn't been just the main characters though, but the very irreverent and often politically-incorrect humor throughout. The show's trademark has been its "cut-away gags", where it will briefly jump to a flashback scene or often a random animated joke or pop-culture parody. A prime example of this is when Stewie smashes Meg's glasses in a fit of rage, and she asks her mom why she can't get laser eye surgery- "Because it's dangerous" she replies, then the scene suddenly cuts to Luke Skywalker about to perform such a procedure on a patient using a light saber. Obi-Wan Kenobi standing to the side tells him to "use the force", and in doing so the patient's eye gets completely gouged. Cut back to the narrative. Quite often characters will bring up things that happened in the past- such as Peter getting into trouble and saying "This is worse than the time they took away my library card for reading while intoxicated" and cutting to a flashback of him at the library reading out loud drunkenly. Some people love these gags, others criticize the show for its over-reliance on them (South Park took this to task in one episode.) 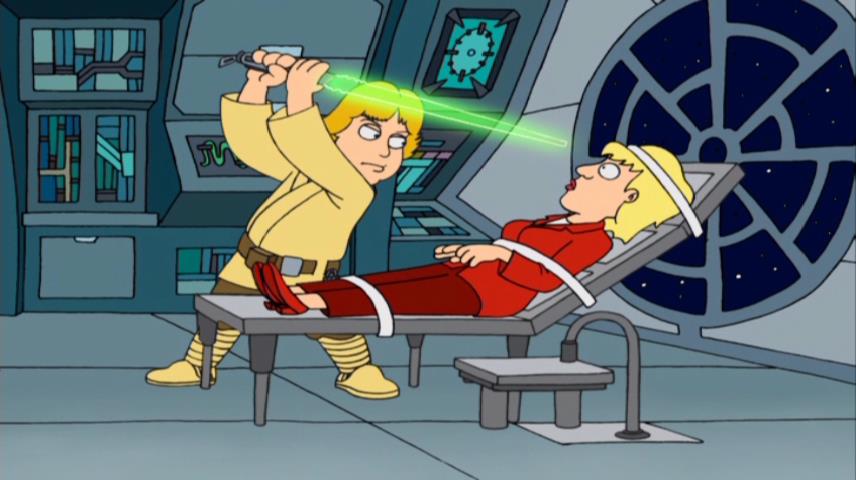 This 3-disc release is the show's second best-of release. There's no mention of why these 20 episodes were picked as the "greatest", but they run the gamut from the early seasons to the latest. Highlights include the controversial "When You Wish Upon a Weinstein" involving jabs at Jews, "I Dream of Jesus" where Peter runs into Jesus Christ himself working in a record store during an occasional return to Earth, and three "Road To" episodes where Stewie and Brian head out on an adventure. This includes the double-length "Road to the North Pole" Christmas episode where Stewie makes the trip to kill Santa Claus for not giving him everything he asked for. (He has a change of heart when upon arrival, Santa wishes that somebody WOULD kill him because of the stress of his work and general unthankfulness he gets in return.) Many episodes include some impressive animated musical numbers which are another trademark element of the show- one that stands out is Brian and Stewie performing onstage with none other than Frank Sinatra Jr. (there are plenty of guest star voices in each show, some of them quite subtle until their name flashes by in the end credits.)

You might be surprised to hear some language in the later episodes which would never be allowed on network TV- it seems that "Uncensored" versions were produced specifically for the DVD sets at one point. (The DVD of "Stewie Griffin: The Untold Story" included both an uncensored and TV-friendly track with more suitable dialogue in place of the profanity.) 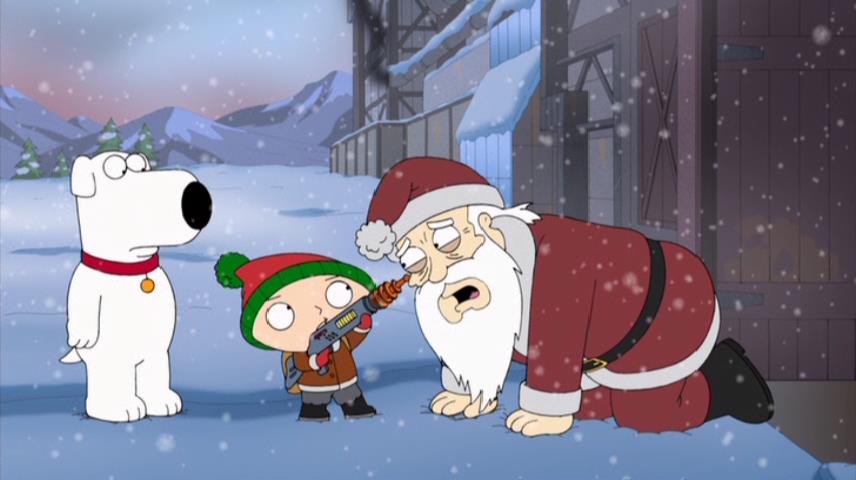 I remember the quality of most of the first Family Guy set to be very good; here it's also pretty good for the most part thanks to the somewhat limited animation where there's not a whole lot of movement. Including more material on each disc does result in some compression artifacts however, and I noticed a bit of ‘combing' in the older shows which typically happens on HD displays. All but the last four episodes here were produced in 4x3 format, which I've found the standard DVD format handles better than 16x9. The widescreen episodes appear a bit softer- they should of course have been on Blu-Ray disc rather than DVD, but I'll still take that over watching the show over the air with the annoying "FOX" logo bug as well as a Twitter hashtag constantly in the corner of the screen.

The original run seasons were mixed in 2-channel Dolby Surround, with the ones produced after the show's rebirth in 5.1. The voices are well-recorded, and the musical score and songs of course add a lot to the sound track. Music seems to be absent in the center channel during the 5.1 episodes, and the surrounds are used sparingly but effectively at times. The Spanish and French dubbed tracks that were on the first two sets aren't included here; those were quite amusing. Subtitles in those languages are still included however along with English hearing-impaired subs and traditional closed captions. 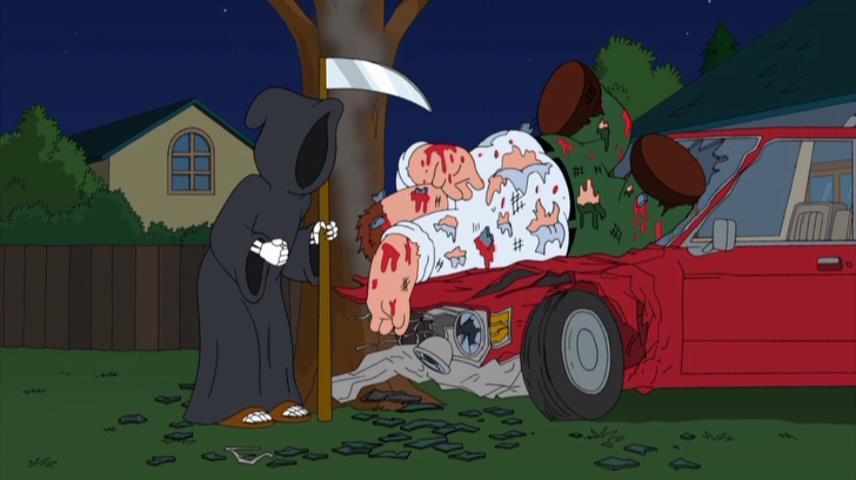 Extras are a bit sparse here; there are no commentary tracks which have been done for a few episodes and included on other releases, and no explanation as to why these episodes were chosen for this set. The main extra is a 15-minute dedication of a Family Guy mural painted outside of one of the Fox studio buildings. Three of the songs get "lyric videos" with song lyrics creatively drawn into the numbers, and Fox's "Music Machine" feature lets you play one or all of the musical numbers on each disc together. A booklet is also included with selected song lyrics, which is a nice touch given the minimal packaging many discs get lately- but disappointingly it seems Fox has stopped doing full-color disc labels and instead only gives these plain white printing. 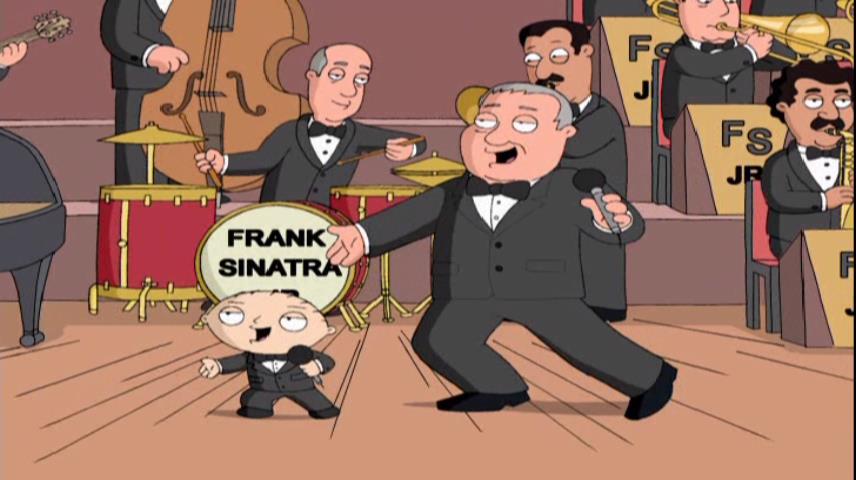 Being a more casual Family Guy viewer, this set was a good representation of the seasons which I haven't bought the complete sets of, even though there's likely to be disagreement over the chosen episodes. There's not much reason to get this if you already have every season set though- and although the industry continues to insist that Blu-Ray releases of TV material don't sell well, by this point they really should be the standard. While I much prefer to own actual media over anything "digital", the quality of the HD episodes is far better through that outlet than on these DVDs although the standard-def episodes look good here.