Understated with almost uncannily authentic performances, it's heart-wrenching but entirely believable and universal in its concerns. For Japanese audiences particularly, much of what happens story-wise resonates because stories like those presented in the film turn up with alarming regularity on the evening news. In short, it's one of the best Japanese features in years.

The film really deserves better treatment than this DVD-only release, which offers not a single extra feature. 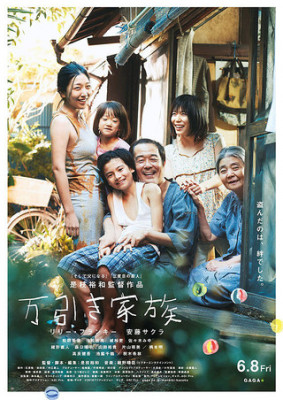 In present-day Tokyo, an ersatz family lives in poverty, crammed together in a small old house (completely surrounded by high-rise apartments) belonging to 70-something Hatsue Shibata (Kirin Kiki). Osamu (Lily Franky), the 50-something father figure, works as a day laborer at a dangerous construction site until spraining his ankle on the job. No worker's comp for him. His wife, Nobuyo (Sakura Ando), toils away as an industrial laundress; half-sister Aki (Mayu Matsuoka), in her twenties, works at a sex club, fondling her breasts for patrons separated by a one-way mirror.

These jobs and Hatsue's monthly bank deposits don't provide enough money for them to live on, so Osamu also steals valuables from cars, while Shota (Jo Kairi), a young boy who lives with them, shoplifts with Osamu providing diversions, and Nobuyo steals small valuables left in the pockets of the clothes she irons and folds.

The movie opens one bitterly cold February night, when Osamu and Nobuyo, heading home, come across a physically abused, undernourished five-year-old girl, Yuri (Miyu Sasaki), apparently locked out of her parents' apartment as punishment. Hearing the boyfriend screaming at and beating up his girlfriend, they reluctantly take her back to Hatsue's house, where she soon becomes part of the family.

Similar to Kore-eda's 2004 film Nobody Knows, Shoplifters dramatizes several scandalous problems in Japan and, as with his Like Father, Like Son (2013) explores the question "What makes a family?" His clear answer is that while few of those in Hatsue's cramped house are actually blood relatives (in a country where adoptions are rare for that reason) they function as a family harmoniously. Sure they commit petty crimes, either victimless (like the pension Hatsue illegally collects on behalf of her late husband), or rationalized as such, only to provide basic necessities like shampoo and udon noodles. The adults are loving toward the two children, while Hatsue and Aki look after one another. The kids, technically kidnapped, can't attend school, but the adults educate them about as well as any public school would. Through their scrimping and saving and thieving they scrape together enough money to spend a day at the beach and, for a time, are as happy a family as any other, more like the romanticized one in the "Tora-san" films than today's Japan, with everyone staring into tablets and iPhones.

Of course, this arrangement cannot last, and the second-half of Shoplifters excruciatingly shows how everything unravels. (Spoilers) Hatsue dies peacefully in her sleep, forcing Osamu to bury her beneath the floorboards. A co-worker at Nobuyo's work blackmails her and she loses her job. Shota, after a botched shoplifting attempt (Akira Emoto has a nice cameo as the understanding shop owner), begins to feel guilty for the first time, culminating in disaster for everyone.

The last long part of the film consists in large measure of police investigators grilling the various family members, admonishing them for their many serious crimes. Watching this part of the film, I began to wonder if Kore-eda had at some point considered telling the story out-of-sequence, beginning with their arrest and all those shocking charges, and to follow this with everything they came before. Had that been done, the movie audience doubtlessly would have first thought their actions monstrous, unpardonable; only in the first-half of the film (in its official form) does it become perfectly clear that most of their criminal acts were reasonable given the circumstances.

Yes, technically Osamu and Nobuyo kidnapped Yuri, but only because she would either have died of exposure that night, or eventually beaten to death. When the police insist to Aki that Hatsue's body was thrown out like a trash, she counters that, no, Hatsue had been cast off like trash by others years before; they looked after her when no one else would.

Such stories are sadly commonplace in Japan. Nary a week goes by without news reports of helpless children beaten and starved to death, often in densely-packed apartment complexes. When neighbors report their concerns to the authorities they invariably fail to take any meaningful action. Similarly, the spouse or adult children of recently deceased relatives often hide their bodies because they're so dependent upon the meager social security income they provide.

Most current Japanese films are marred by very bad acting: broad, obvious, and theatrical, with younger generation actors playing even serious drama on the same hard-sell level of a toothpaste commercial. Kore-eda, however, has over the last 20-plus years developed a stock company of players, of whom Franky, Emoto, Sosuke Ikematsu (as "Mr. 4," a client of Aki's), and Kiki appear here. All of the performances are exceptional in their naturalness, however, including the two children, particularly heartbreaking Miyu Sasaki as Yuri. There's not a false moment in the film.

Magnolia's DVD is barebones with the main menu offering but a single option: "Play Movie." Fortunately, the 1.85:1 enhanced widescreen transfer is quite good, as is the 5.1 Dolby Digital Surround. The English subtitling is fine, though the end credits embarrassingly identify veteran actress Kirin Kiki as "Kilin Kiki" (!). Zero Extra Features.

It really needs a deluxe Blu-ray, but for now Shoplifters is a must-see, even limited to a DVD release with no supplements. A DVD Talk Collector's Series title.