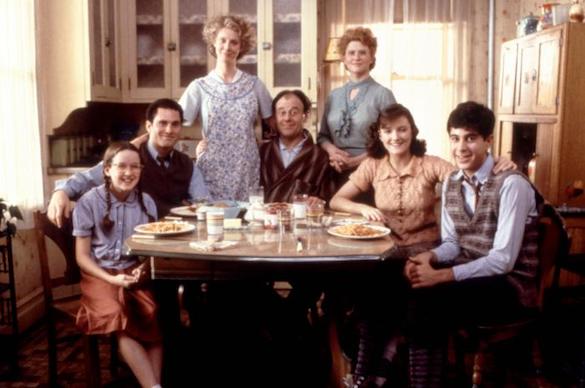 "I want to write books or plays or movies. That is, if things don't work out with the Yanks."

Brighton Beach Memoirs was adapted in 1986 from the first of Neil Simon's autobiographical plays (which include Biloxi Blues, brought to film in 1988, and Broadway Bound, made into a TV movie in 1992). Gene Saks, who directed the show on Broadway, also directs the film, his fourth time bringing a hit Simon play to the screen. It's of little surprise that the end product feels a bit big and stage-y. Simon and Saks are pro enough that this adaptation never feels like "filmed theater," but they also can't resist the urge to play to the back row of the house.

Memoirs is a nostalgia piece cut from similar cloth as Radio Days, by Woody Allen (who, like Simon, was a former Sid Caesar writer born and bred in Brooklyn), and Jean Shepherd and Bob Clark's A Christmas Story. Everything comes in a slightly sepia haze that makes things a little sweeter and schmaltzier than they probably were. Although: I was shocked, upon revisiting this film for the first time since I was literally a child, at how insanely horny it is as well. This isn't too totally surprising, I guess, as the film's main character is a 15-year-old boy in the full thrall of puberty.

The film's young Simon stand-in is called Eugene Jerome, and he's played by a pre-Single Guy, pre-Weekend at Bernie's Jonathan Silverman. Though clearly a grown man in oversized shirts and short pants to make him look younger, Silverman conveys the right mix of smart-aleck cleverness and hormonal neuroticism so that we buy him as a precocious kid and not a developmental oddity. Eugene wants to be a writer, and this impulse is mostly communicated to the audience by his fourth-wall-breaking narration of day-to-day life.

Eugene's home is filled with relatives: his mother Kate (Blythe Danner), who is the classic Jewish-mother mix of bossy, nosy, and self-martyring; his thoughtful but overworked dad, Jack (Bob Dishy); his older brother Stanley (Brian Drillinger), who shares a bedroom with Eugene and helps support the family; his aunt Blanche (Judith Ivey), who moved in with her daughters after her husband died; his younger cousin Laurie (Stacey Glick), who is constantly being pampered because of a heart murmur; and his older cousin Nora (Lisa Waltz), who is the unwitting recipient of all of Eugene's pent-up sexual feelings. The cast is mostly excellent, except for Drillinger as the older brother; he is a little too straight and flavorless in comparison to the spotlight-grabbers all around him.

There's not a big plot at play here -- when not playing in the street or running errands for his mother, Eugene's major goal is finally seeing a boob -- so Simon's script threads up a bunch of small stories among the ensemble cast. Aunt Blanche entertains the idea of dating a neighbor (James Handy), but Kate constantly dismisses him as an Irish drunk. Brother Stanley stands up for a co-worker and ends up on the verge of losing his job, at the exact moment that father Jack's employer goes out of business. Nora is spotted in a dance rehearsal by a Broadway producer, who wants her to be in his next show, though the family elders think she should finish high school and college instead.

Simon creates a few setpieces to bring these conflicts to a head, including an absurdly tense family dinner around halfway through (first act curtain?) and a long-overdue blow-out between Kate and her sister Blanche near the end. The emotional beats work better than a lot of the broad sex stuff, like Eugene watching the neighbor lady undress out his window, or making excuses to sneak a peek up his cousin's skirt at the dinner table. Even for a period piece, those moments feel distinctly dated. 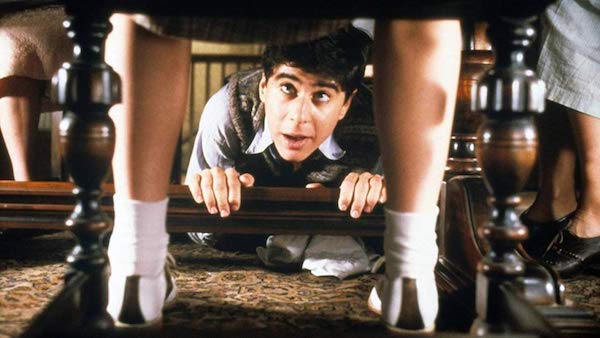 The Video:
Don't be scared off by the opening title sequence, which is pretty soft and flat. After the credits, the AVC-encoded 1080p 1.85:1 transfer improves markedly, with strong detail and notable depth. Color palette is relatively muted, in an intentional faded-photograph way, but the effect isn't overdone. Skin tones look accurate.

The Audio:
A surprisingly robust response from the DTS-HD MA 2.0 stereo audio mix. For a dialogue-driven film, there's plenty of action in terms of layered sound design and musical punctuation. An optional English subtitles track is included.

Final Thoughts:
There are multiple layers of nostalgia at work in this release of Brighton Beach Memoirs, first for the bygone era of Jewish family life in 1930s Brooklyn and secondly for the bygone era of Neil Simon's dominance of both the Broadway stage and the silver screen. This film is shticky and sentimental, but in an idiosyncratic way that points to its author's unique talent. (Hopefully, there's a disc of Biloxi Blues already in the works.) The cast carries the story nimbly through its creakiest moments, so there's no good reason this shouldn't come Recommended. 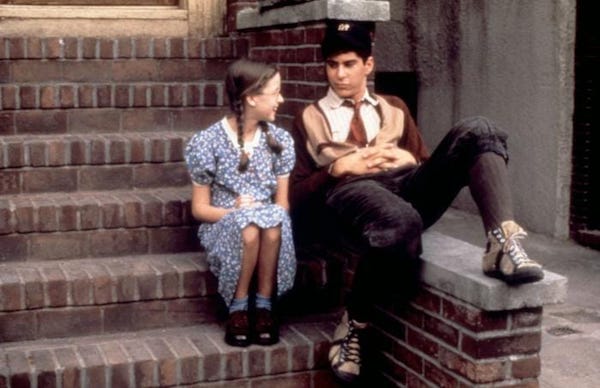