1988's Talk Radio showed that Oliver Stone could direct a smaller movie alongside "big important" productions like Platoon. Starring Eric Bogosian and based on his one-man stage show, it covers a subject that was of great interest to me at the time of its release. I'd discovered how interesting talk radio could be after pretty much giving up on hearing any good music on stations in my area- in fact a favorite joke back then was to say that the talk stations played better music than the music stations. I'd wanted to work in radio back then either behind the microphone or elsewhere behind the scenes, and while I'm glad I didn't end up doing that I still follow what's left of the medium today. Admittedly one of the biggest thrills I got out of most shows that took listener phone calls on the air was hearing people who were either completely nuts, or possibly just putting on an act trying to be funny. 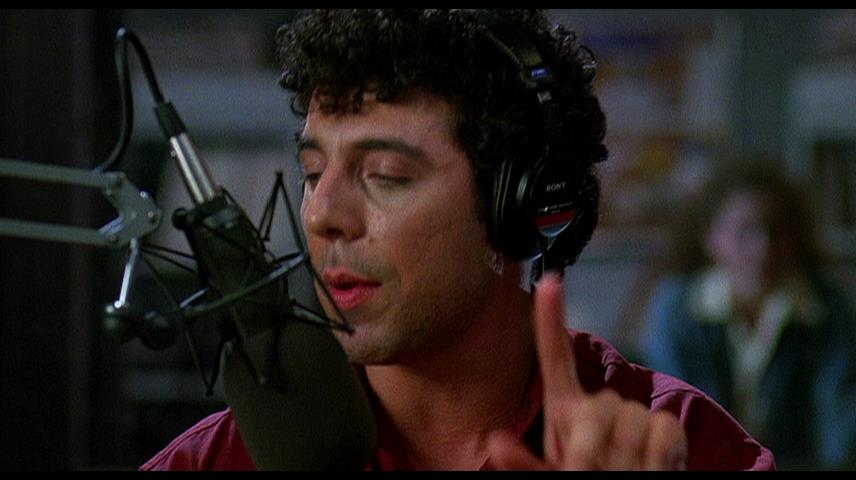 This story takes place at a talk station in Dallas called KGAB, and Bogosian plays Barry Champlain (is it a coincidence that this name is similar to "complain"?) the host of its night-time show where he rants about how messed up the world in general is (starting things off by stating that a survey showed that people would rather watch TV than have sex with their spouses), but seems to give the most airtime not to himself but to the listeners who call in with their own rants. They don't talk directly about current events (possibly to make the movie not seem as dated years after its release?) but just about general things that bother them. Many of them sound mentally unstable, spouting off racist rants sometimes against Barry himself with his being Jewish. Others are harmless shut-ins who just want someone, anyone, to talk to, and just say how much they like his show or talk about what they've been doing at home. Barry has quick comebacks for those who he doesn't like, such as cutting off one caller and telling him not to call again until he's gone back to college, and to a lunatic ranting about how much he hates certain racial groups he asks him why he brought them up in the first place if he hates them so much? (I enjoyed the real radio hosts of the time doing similar things, cutting them off quickly if they think they're boring, or calling them out when trying to spread hate speech.)

Barry receives sudden news from the station manager (Alec Baldwin in an early role) that a deal has been signed to take the show national, syndicated on stations all over the country, which surprises Barry and somewhat resents not being asked about it before the deal was closed. A network executive arrives to watch him do his show through the many windows surrounding the studio, which puts unneeded pressure on him and makes him feel like he's auditioning for his own job. The movie's structure is mostly straightforward as the stage show was- taking place over two nights, we observe Barry live on the air while cutting to reactions from the station staff in the control room. Departing from the play however is a flashback sequence in the middle that shows how he got into the radio business in the first place.

Bogosian's manic performance makes this worth watching, it's a shame that he hasn't been able to do much else to match this (although the live film of his other one-man show Sex, Drugs, Rock & Roll is also worth seeing.) It's hard to believe this movie is now 30 years old- it's now a decent look back at the late 1980s as many things have changed since then, primarily the internet which has made it much easier for anyone to speak their minds to the world no matter how crazy. Like another radio-related movie Pump Up The Volume, this doesn't age entirely gracefully however. Many elements don't seem quite so brilliant to me later, and there's a number of radio-related details that were inaccurate then and even more so now. There's a bit where Barry first gets a call from a crazed metalhead (Michael Wincott) saying that he needs help because his girlfriend's just overdosed- when Barry calls him out as making all of that up and he admits to it he invites him over to the station to sit in as a guest while he subtly insults him further, telling listeners to be fearful that he represents America's future. It's pretty clear that his long hair isn't real. It's also a bit obvious that the different "characters" calling in are often the same people, confirmed in the end credits as voice actors playing more than one role. This could also be interpreted as someone repeatedly calling in using different personalities, but that wasn't the intent here. The syndication deal is a bit of foreshadowing though as most radio talk shows and now even some morning comedy and regular music DJs are now distributed to many stations nationwide, mainly as a way of saving money from having to staff everything locally. 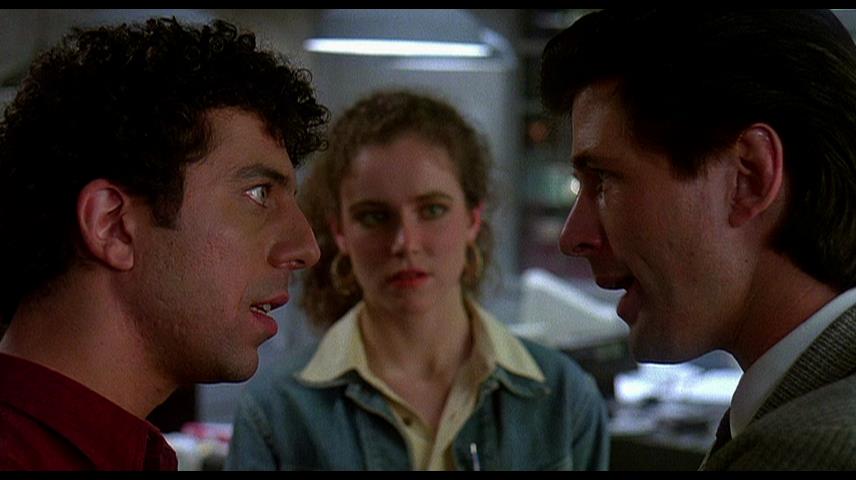 Truth be told, something isn't quite right with this Blu-Ray disc. Although the film elements look fine, this actually looks more like an upscaled standard-def transfer than hi-def and honestly doesn't show much overall difference from Universal's DVD which I have on hand to compare. I'm super-picky about picture quality and often scoff at people who say they can't tell the difference between the two formats, but this is the first time I can honestly say that. Just about every other movie I've watched on Blu-Ray looks like a good film print, but this just looks more like standard DVD and the format wouldn't have gone anywhere if every disc looked like this. I have no knowledge of the transfer used here or any other technical details, I'm just going by what I see. The only improvement over the DVD is that disc annoyingly had the first few minutes windowboxed where the opening credits appear, that does not happen here. The movie is still perfectly watchable, but it just falls short of what you would expect from a Blu-Ray disc and aside from the windowboxing issue anyone expecting a huge improvement over the DVD is going to be disappointed.

Audio gets a bit of an upgrade in 2-channel DTS Master Audio instead of the DVD's standard Dolby Digital. You'd think a movie called Talk Radio wouldn't be much sonically (even the FM talk station here broadcasts in mono) but it's used quite effectively here. While it does mainly consist of dialogue in the center channel, Stewart Copeland's music score fills the left and right and shots outside the studio in the station's halls feature the broadcast sound echoing through the rears. Disappointingly there are no subtitles or captions, even though the DVD included subtitles in three languages. 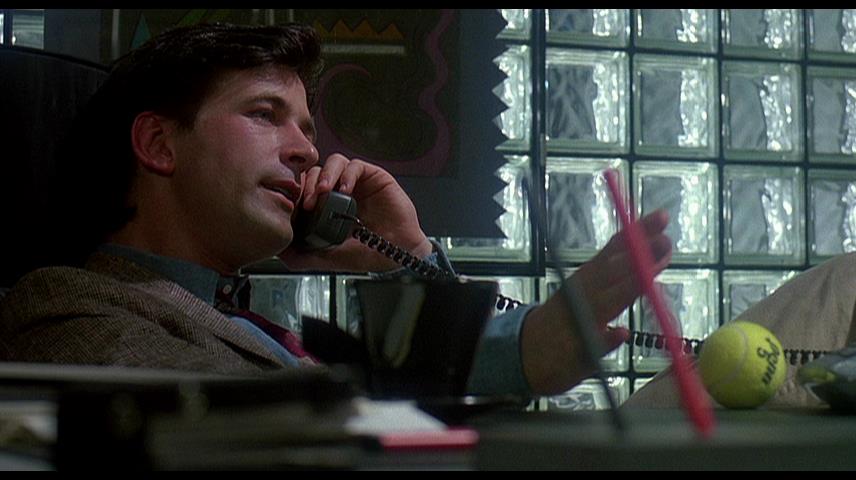 Extras are a bit light, as the only one of substance is a 20-plus minute segment with director Oliver Stone looking back on the movie. He talks a bit about what the movie means to him and points out a few camera techniques that he used on his next "big" movie Born on the Fourth of July. He also talks about the set design, saying that the radio station shown here isn't real and not what any real studio would look like- he points out that the many windows in the studio presented a challenge to avoid reflections of cameras, crew members and what-not, but at least two instances of those are visible during the movie. The theatrical trailer in standard-def 4x3 is included, and as usual for Twilight Time you get an isolated music track featuring Police drummer Stewart Copeland's score along with some but not all of the other music featured in the background (noticeably absent is George Thorogood's "Bad to the Bone" which is used as the show's theme song; hearing clear recordings of the fictional commercials being played would have been nice also.) There are many silent passages here as many scenes are not scored, and the lack of any subtitles doesn't help when playing this track. 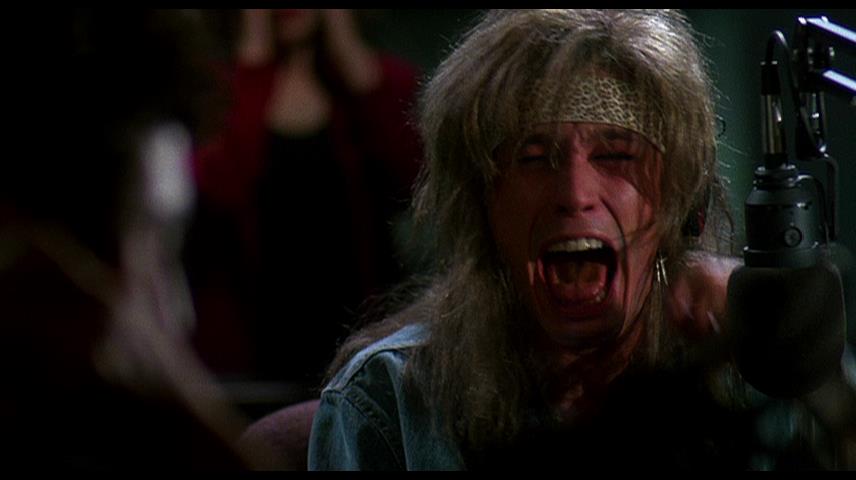 Talk Radio may not appeal to anyone, but I still found it entertaining for the most part although it doesn't quite hold up after 30 years. It will mostly be of interest to radio geeks and fans of the tail end of the 1980s. While I still recommend the movie and this disc for those who don't already have a copy, the sub-par picture quality won't be a significant upgrade for those who already have the DVD.