Flicker Alley // Unrated // April 5, 2019 // Region 0
List Price: $34.99
Review by Stuart Galbraith IV | posted April 29, 2019 | E-mail the Author
An all but "lost" Cinerama film, unseen by the general public for nearly half a century, The Golden Head (1964) is a movie this writer has been anxious to see since the 1980s, when I first became aware of it in Robert E. Carr and R.M. Hayes's book Wide Screen Movies. A U.S.-Hungarian production, it premiered in Hungary in December 1964 and in London the following spring, but had few other European engagements and was never released in the United States at all. Apparently, it wasn't until Cinerama Inc.'s restoration, supervised by David Strohmaier, that it received limited public showings in America, beginning in 2012.

The reason for its disappearance was simple: the movie received tepid reviews and bombed in London, playing less than two months before it was unceremoniously pulled. (The more popular Cinerama releases ran six months or more, the biggest hits more than two years.) Misleading advertising was partly to blame, The Golden Head advertised as one of their typically immersive, eye-popping thrill rides. Had they publicized it for what it is - a Disneyesque family comedy of the style they excelled at during the 1950s and early ‘60s, a mild but definite departure from the usual Cinerama fare - the picture might have been better received. There were production problems, too, with the original director and two of its stars replaced after shooting had begun, and their replacements don't improve the film, either.

Still, it's a gorgeous looking film and, dramatically, it's much better than Holiday in Spain, the Cinerama version of Scent of Mystery (1960), which Flicker Alley released to Blu-ray in 2014. It's a pleasant with deliberately simple aims; if you enjoyed Disney films like Greyfriars Bobby (1961), Almost Angels (1962), The Three Lives of Thomasina (1963), and others of that period, The Golden Head is for you.

It was photographed in Super Technirama 70, the 35mm horizontal format adapted from VistaVision (but with 70mm prints), with some footage shot in MCS-70, a Todd-AO 65mm/70mm derivative. In the supplements, Strohmaier reports that the negative, despite its two formats, was in comparatively great shape, retaining about 80% of its original color and in need of relatively minor restoration work. Flicker Alley's disc of The Golden Head is packed with extras, making this a highly desirable release. 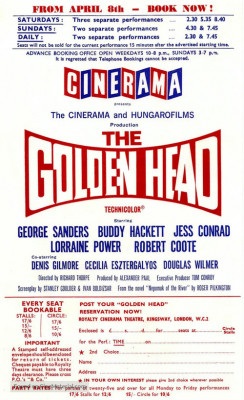 The White Rabbit, a quaint all-metal pleasure ship, travels down the Danube toward Budapest. Aboard are Detective Inspector Stevenson (Douglas Wilmer) of Scotland Yard, and his three children: teenager Michael (Jess Conrad), younger brother Harold (Denis Gilmore), and their kid sister, Milly (Lorraine Power). D.I. Stevenson is on his way to an international police conference, partly focusing on the activities of master criminal Basil Palmer (George Sanders), who coincidentally is also en route to Budapest, via car and trailer, and accompanied by his dim-witted American henchmen, Lionel Pack (Buddy Hackett).

Before reaching the city, Basil is met by British Legation office Braithwaite (Robert Coote), who whisks Stevenson to the conference via sportscar, while the kids, now joined by Anne (Cecília Esztergályos), a Hungarian friend who'd visited them in London earlier, proceed by boat by themselves toward Budapest.

Along the way, stopping to buy supplies, Millie is trying to buy bread when she meets a friendly, English-speaking priest (Sándor Pécsi) who offers her a rare treat, to see the priceless Golden Head of St. Laszlo being cleaned at the home of a family entrusted to its upkeep for generations, near the Cathedral of Gyor. Afterwards, Millie bumps into Palmer and she, unaware of his notoriety as a wanted criminal, casually reveals the home where the artifact is being looked after. He steals the Golden Head, then has Lionel hide it in the lifejacket locker aboard the White Rabbit.

The Golden Head began production in the fall of 1963 under the direction of James Hill (A Study in Terror, Born Free) with Hayley Mills playing Milly and British character actor Lionel Jeffries (Chitty Chitty Bang Bang) as Palmer. According to Carr-Hayes, weather problems and clashes between the crew and Hill put a temporary halt to the production, which resumed the following spring but with veteran MGM director Richard Thorpe replacing Hill, Power replacing Mills, and Sanders replacing Jeffries. Most or all of the footage Hill had shot was scrapped and redone. (Carr-Hayes, who hadn't seen The Golden Head up to that point, claimed some of Hill's footage was shot in three-panel Cinerama, but that might be incorrect, and no three-panel footage appears in the finished film.)

Lorraine Power, eight or nine years old, and much younger than Mills (who would have been 17 at the time), is cute but not a natural actress. Her line readings are rather awkward, and may have been looped during postproduction. She apparently made no other films, and clearly lacks the energetic, sunny presence Hayley Mills would have brought to the film, not to mention Mills's Disney association.

George Sanders plays his stock persona, less acidy, perhaps, than his Oscar-winning Addison DeWitt, but still too stuffy and aloof to really work, his style clashing with Buddy Hackett's broad slapstick like oil to water. Lionel Jeffries would have been another improvement, the actor having an especially strong affinity for such material, Jeffries later gaining prominence as an acclaimed writer-director of children's films, most notably The Railway Children (1972). One also suspects another actor was probably in mind when The Golden Head was first conceived. Buddy Hackett had already been teamed with Terry-Thomas in the Cinerama film The Wonderful World of the Brothers Grimm (1962), and the gap-toothed comic actor would have been the ideal, obvious choice.

None of these faults prove fatal, however, as The Golden Head is mostly quite enjoyable anyway, if slight. Undervalued Douglas Wilmer is very good, and Jess Conrad (Konga) sings a pleasant little pop tune, "Things I'd Like to Say." Robert Reitty and others dub most of the Hungarian actors when they're speaking English, and though he doesn't seem to be listed anywhere, including the IMDb, I'm pretty certain that's Warren Mitchell (Till Death Do Us Part) playing the annoyed London cabbie in one scene.

There's a dearth of usual Cinerama you-are-there moments until climax, when Sanders and Hackett, not stunt doubles, try to escape the kids and authorities by hopping aboard the back of a speeding fire engine which appears, at times, to be moving as fast as 60kph. Later, they're seen at least partway up the Elisabeth Bridge (connecting Buda and Pest), still under construction when the movie was made, so instead they scurry up and down wobbly temporary suspended walkways, high above the river. In other Big Screen moments, the Budapest Ballet performs an excerpt from Swan Lake, and there's a colorful sequence involving traditional Hungarian folk dancers, a handheld camera used to good effect.

The Golden Head has been restored from the original Super Technirama and 65mm elements with only minor color correction and digital clean-up, and presented in Smilebox format, emulating the deeply-curved screen of the original, very limited theatrical release. The image is excellent, the sharp, deep focus of the Hungarian locales alone making this worth the price. The original 6-track magnetic stereo has effectively been adapted to 5.1, with much directionality up front though limited use is made of the surround speakers. English subtitles are provided, the disc is region-free, and a DVD disc version is also included.

Supplements include the previously released-to-Blu-ray Fortress of Peace (1965), a Swiss-made short subject also photographed in 65mm and which originally accompanied the release of The Golden Head; A Tale of Old Whiff (1960), a 70mm cartoon by John Hubley that originally followed (rather than preceded) screenings of Scent of Mystery and, like that film, was originally exhibited with carefully-timed aromas. That short required a lot more work, with some problems inherent in the original production, which Strohmaier suspects was originally shot in 35mm CinemaScope and blown-up to 70mm for its brief engagements. Nonetheless, the long-lost cartoon is a welcome addition. Strohmaier also details the restoration of that cartoon and The Golden Head in separate, enlightening featurettes, and there's both an image gallery and trailer gallery. Finally, a recreation of the original program booklet accompanies the disc.

The Golden Head is only fairly good, not great, but that doesn't diminish the significance of this Blu-ray release, a colorful, entertaining movie that was barely released when it was new and virtually unseen in the half-century since, a fate it didn't really deserve. Highly Recommended.