Flicker Alley // Unrated // March 26, 2019
List Price: $39.95 [Buy now and save at Amazon]
Review by Stuart Galbraith IV | posted May 22, 2019 | E-mail the Author
Until now, Flying Clipper (1962) was one of the most obscure, near-impossible to see films of the big screen, 70mm era. A West German-produced travelogue, it was released there (and now on Blu-ray and 4K UHD) as Flying Clipper - Traimreise unter weissen Segeln ("Flying Clipper - A Dream Trip Under White Sails"). In late 1964 smalltime distributor Continental began release of an English-dubbed version in the U.S., retitled Mediterranean Holiday, and narrated by Burl Ives.

The movie was photographed in MCS 70 (Modern Cinema Systems), a 65mm/70mm process developed in Germany but nearly identical to Todd-AO and Super Panavision 70. Confusingly, the process is also sometimes called Superpanorama 70 and, in some markets, it was exhibited in Wonderama, using a special projection lens designed to maximize sharpness when shown on deeply-curved screens. In other places it was exhibited in 70mm Super Cinerama, on its curved screens, while Continental also offered prints in ordinary 35mm CinemaScope. Perhaps to clarify things, the packaging simply notes "Presented in 70mm" which is essentially true, as a 70mm print was sourced.

The film has outstanding cinematography and, as a time capsule of Mediterranean tourist hotspots as they existed in 1962, Flying Clipper is well worth the trip. The movie makes many peculiar choices, however, and in mostly emulating earlier big screen travelogues, proves rather disappointing, and is even rather dull in places. It's a good restoration, however, and both the Blu-ray and 4K UHD discs are packed with extra features. 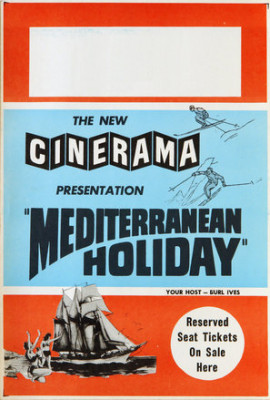 The picture revolves around the Swedish merchant marine school-ship Flying Clipper, a three-mast topgallant schooner, and her crew of 14 sailors, most 16-18-year-old teenagers. The film follows their adventures in Portugal, Yugoslavia, Egypt, Lebanon, Turkey, Greece, the French Riviera and Monaco, and Spain.

If all this sounds familiar, that's because Flying Clipper is virtually a remake of Windjammer (1958), the three-panel Cinemiracle roadshow that told a nearly identical story (while visiting different locales). Long before these movies became available again via Blu-ray, folks I spoke with who'd seen the original Cinerama and Cinerama-type travelogues back in the day invariably singled out Windjammer as their favorite or one of their favorites. Having seen all of them now, it's easy to see why. Windjammer subtly deviated from the usual Cinerama film with its carefully crafted, more personal approach. For the first time, one set of characters, the young lads aboard the windjammer, was followed through its story from beginning to end. The film also made a point to detail the everyday workings of a sailing school ship, and in so doing, not only invited the movie audience to, vicariously, visit faraway lands, but also to experience the voyage as a kind of unseen member of its crew. Adding to the drama is the sailors' friendship with the German schooling ship Pamir, which sank in a hurricane with nearly all hands aboard.

Flying Clipper, on the other hand, makes little attempt to personalize the voyage, even though its crew is noticeably fewer in number. The workings of the ship aren't explained well or at all, and instead the movie focuses much more on the touristy ports of call. Where Windjammer was narrated by one of the young recruits, Flying Clipper's (English) narration is more imitative of Lowell Thomas's in the earlier Cinerama films. Though folk singer Burl Ives joins in on the soundtrack to sing several songs, most of the narration has the same peculiar blend of pomposity, corny and folksy attempts and humor, and pro-Democracy propaganda.

The unimaginative imitating of Windjammer peaks in a long U.S. Navy sequence. In Windjammer, some of the men are invited to participate in naval maneuvers, while in Flying Clipper one of the boys (supposedly) needs an emergency appendectomy and is flown to a small aircraft carrier for surgery. In Windjammer an unobtrusive dog served as the ship's mascot, while in Flying Clipper a chimpanzee makes an improbable visit.

Considering the film's German origins, it's surprising that for their first film of this kind they'd chose to focus on a Swedish schooner with Swedish sailors that interact with the U.S. Navy and visit most of the European continent without ever once mentioning Germany.

Conversely, Flying Clipper was undoubtedly a major influence on John Frankenheimer's later Cinerama roadshow Grand Prix (1966). In Flying Clipper, a long sequence highlights the Monaco Grand Prix, featuring helicopter and you-are-there views of the winding course nearly identical to that later film. These sequences are also notable for the appearance of Princess Grace, the former actress Grace Kelly, in a rare film appearance. (She's seen only in long shots and does not interact with the Flying Clipper cameras directly.)

Some of the locations are photographed in interesting ways, or are interesting in hindsight. The Yugoslav mountains and waterfalls remind viewers of Germany's Karl May Westerns, then becoming extremely popular. (One was later filmed in MCS-70, in fact.) Looking at the young women accompanying the sailors, one can't help but wonder their fates during the Yugoslav Wars 30 years later. In Egypt, the MCS-70 camera films sailors climbing all the way to the top of the Great Pyramid of Giza, something no longer permitted. It's fascinating to see the huge blocks, with centuries of names and messages carved into the rock, and the view from the top. Similarly interesting is a visit to the Parthenon, amusingly over-dubbed with the conversations of tourists from all around the world, all making the kind of stereotypical comments Jacques Tati later spoofed in Playtime (1967). The French Riviera scenes are fascinating, to see it in its early ‘60s, relatively unspoiled splendor.

The cinematography is, occasionally inventive when not also extraordinarily beautiful. The helicopter shots, hard to achieve in those days, have the smooth quality of today's drone videography. One travelogue cliché, a shot of the moon over the sea, gets an amusing twist: shot on deck, the moon appears to bounce like a yo-yo.

However, the 158-minute film has many dull stretches, with too much folk dancing and palace guard marching. Navy buffs will enjoy the historical value of those scenes, but their propaganda aspects become tiresome, as do the antics of "Mr. Charley" the chimp.

Though packaged much like Flicker Alley's Cinerama titles, Flying Clipper is actually licensed from the German label Busch Media Group, which released the title to Blu-ray and 4K UHD (using Dolby Atmos) in separate releases in 2017. Both are included here, in a single package, and have the same extras. I viewed the Blu-ray version (not yet 4K ready, alas), which is impressively sharp but a dark at times. Some blacks are so black they resemble empty mattes. Possibly this is a result of the extreme color correction required as a restoration comparison accompanying the film shows how magenta the 70mm print sourced had become. Unlike the Dave Strohmaier Cinerama restorations, Flying Clipper hasn't been cleaned up as much, with reel change cues and a modest amount of dirt and wear are visible, though these are minor complaints. Also, while Flying Clipper was originally exhibited on deeply-curved screens, the presentation here gets a flat 2.20:1 letterbox treatment. There's a similarly projected "fake curtain" for the overture, which is nice, but there's an awkward intermission break (it's in German, simply "PAUSE") and no exit music. The 5.1 audio is very impressive, however, with much directionality. Region "A" encoded.

Menu screens are very basic, and may be nothing more than a repressing of the original German discs. At first I was torn whether to listen to the original German soundtrack with English subtitles, or the Burl Ives-narrated English edition. The disc made the decision for me, as it turns out the English subtitles are "dubtitles" of Ives's jokey narration, not of the German audio track. Also included are audio in French Spanish, Portuguese, Dutch, Slovakian, and Japanese, and subtitles in all of those languages.

The many supplements are coincidentally much like those on the Cinerama Blu-rays. They include interviews with 70mm authority Herbert Born, projectionist Marcus Vetter, and Christoph Engelke, who details the film's audio restoration and use of Dolby Atmos. Also included is a nice reproduction of the original (English) program booklet, the aforementioned restoration comparison, and a trailer gallery.

At a time when so few classic big format films are available on 4K, and others are still MIA even on Blu-ray, the release of a film as fiendishly obscure as Flying Clipper is most welcome. Highly Recommended.