Twilight Time // Unrated // April 16, 2019 // Region 0
List Price: $29.95 [Buy now and save at Twilighttimemovies]
Review by Stuart Galbraith IV | posted May 28, 2019 | E-mail the Author
Probably like many, I avoided the 1966 remake of John Ford's 1939 classic Stagecoach assuming any such undertaking was a fool's errand, if not downright sacrilegious. After all, Ford's film set a new standard for movie Westerns. It's still an exhilarating viewing experience, one that even, so he claimed, taught Orson Welles the basics of filmmaking before he embarked on his own landmark Citizen Kane.

The director of the remake, Gordon Douglas, was workmanlike but no great auteur. He started out at Hal Roach Studios, eventually supervising the last Roach years of the "Our Gang" shorts before graduating to program pictures, first at RKO and later at Columbia. The 1950s, when he was mostly ensconced at Warner Bros., was Douglas's best decade, with his work there including Them! (1954), Young at Heart (1955), and three low-budget but well-regarded Westerns starring Clint Walker. By the 1960s Douglas mostly helmed uninspired star vehicles, particularly for Frank Sinatra, who liked directors he could push around. After Stagecoach, Douglas's only halfway-decent film was The Detective (1968), again with Sinatra.

The remake of Stagecoach is better than one might expect. It's drably directed most of the time, but springs to life with a couple of unexpectedly outstanding action sequences. The all-star cast offers its own share of surprises, too: Mike Connors, Bing Crosby, and even Alex Cord (in John Wayne's role) are all quite good, though Bob Cummings is miscast and Ann-Margret is just okay in the other critical part. On in its own terms it's above average. 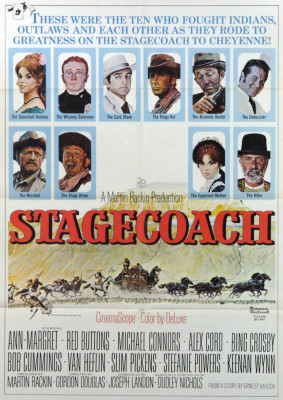 In 1880 Wyoming Territory, Sioux Indians massacre a detachment of Cavalry soldiers. The remake mirrors the original film's plot and characters closely, with various stagecoach passengers compelled to make the perilous journey from Dry Fork to Cheyenne, through the same dangerous region. Dallas (Ann-Margret), a prostitute, and Josiah Boone (Bing Crosby), an alcoholic doctor, are run out of town. Lucy Mallory (Stefanie Powers), the prim and proper pregnant wife of a Cavalry officer, is anxious to reunite with her husband, while Henry Gatewood (Bob Cummings), has absconded with $10,000 of his father-in-law's money. Also along for the ride are Mr. Peacock (Red Buttons), a liquor salesman who dresses as a minister, and Hatfield (Mike Connors), a hardened but gentlemanly gambler. Marshal Curly (Van Heflin) accompanies the stage, driven by Buck (Slim Pickens). En route, they encounter and Curly arrests the Ringo Kid (Alex Cord), a notorious fugitive looking to avenge his father and brother's murder, killed at the hands of the Plummer family.

The characters may be familiar, but the film opts for an entirely different visual scheme. Stagecoach was the first of Ford's Westerns to be shot in Monument Valley (and set in Arizona and New Mexico, like the original story), but the remake was filmed in the lush green mountains of Colorado. Further, where the original was photographed by Bert Glennon in rich black-and-white, the remake is in color and CinemaScope. Further classing up the production are paintings over the end credits by Norman Rockwell, who has a small role in the film as a poker player.

Stagecoach is one of those stories so inherently compelling it'd take a lot of effort to completely ruin any adaptation. As such, the remake has many good qualities and some weak ones. The studio interiors are unimaginatively staged, lit, and photographed for the most part, and rarely feel authentically period. Stagecoach delivers, however, in its action scenes. The massacre that opens the film is shockingly violent by 1966 Hollywood standards but entirely justified in terms of establishing the threat, especially for audiences of the time used to much tamer action on TV Westerns, a herd that had thinned considerably by 1966.

The climatic chase between the attacking Sioux and the hell-bent-for-leather stage is excitingly shot and cut together, incorporating several outstanding aerial shots, which emphasize well their spatial relationship to one another. Jerry Goldsmith's excellent musical score is another asset.

The cast, reprising all those memorable characters in the original, is more hit than miss. Claire Trevor's Dallas had clearly been around the block a few times, while Ann-Margret, then 25, is too bright-eyed and bushy-tailed to be believed as a seasoned saloon gal. Likeable Bob Cummings was cast against type, here playing a cowardly, philandering thief, itself not a bad idea, but the actor's personal problems, an addiction to methamphetamines that was beginning to affect his performances, makes him uncomfortable to watch, lacking any subtlety. (In his final movie the following year, Five Golden Dragons, Cummings is all too clearly sky high.)

However, the good performances pointedly don't try to imitate the original actors, even starkly contrasting them physically at times. As the gentleman gambler in the original, John Carradine was rail-thin and theatrical, while former basketball player Mike Connors is a mountain of a man and his performance relaxed and genial. Bing Crosby's alcoholic sawbones seems to be reading many of the same lines Thomas Mitchell did in the 1939 film, but does so in an entirely different manner, a slightly subdued variation of his familiar screen persona.

This writer never cared for actor Alex Cord, but he too doesn't try repeating the original actor's moves, in this case John Wayne, big shoes to fill. Cord is much smaller and wiry, and in not attempting Wayne's emerging radiance on the screen, makes the character intimate and believable. He's not superior to Wayne's Ringo, but it's a valid characterization.

One of the last credited CinemaScope (2.35:1) releases, Stagecoach looks great on Blu-ray. While the studio interiors are nothing special, the location photography really pops off the screen. The DTS-HD 1.0 Master Audio is reasonably strong for what it is, and comes with optional English subtitles. The disc is region-free and limited to a 3,000-unit pressing.

Though not in the same league as John Ford's 1939 classic, the 1966 Stagecoach is a lot better than one might expect, on its own terms a solid, well-made big studio Western, and Highly Recommended.