Twilight Time // R // April 16, 2019
List Price: $29.95 [Buy now and save at Twilighttimemovies]
Review by Stuart Galbraith IV | posted June 5, 2019 | E-mail the Author
Back in the days when I lived in "Hollywood," most of my neighbors were like Melvin Dummar, the protagonist of Melvin and Howard (1980). One had written a Gone with the Wind-type romantic epic set in Italy, but this first-time writer would only sell her script if the buyer also agreed she could play its Scarlett O'Hara-esque heroine. Another believed his pet project to direct a $100-million epic adaptation of a novel about druids was always on the verge of going into production, this despite the fact that he never acquired the screen rights. Or that his credits consisted mainly of driving a honeywagon (portable toilet truck) on a forged driver's license. Others, would-be movie stars, mostly hung around the swimming pool, waiting to be discovered, until their money ran out and they were forced back home to the Middle West and beyond.

Reminiscent of Michael Ritchie's criminally underrated Smile (1975), Jonathan Demme's Melvin and Howard (1980) is a movie about a loser with similarly unrealistic and unrealized ambitions. He's a loveable loser, to be sure, but as Bo Goldman's wonderful screenplay emphasizes, his inveterate irresponsibility costs him the love of his life, and damages his relationship with his kids. 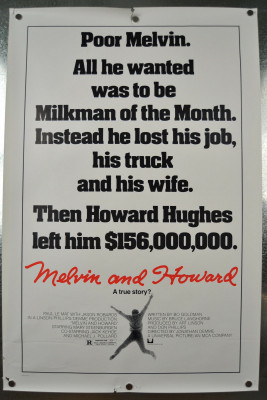 The movie is at least partly based on real events. In the movie, magnesium factory worker Melvin Dummar (Paul Le Mat) is driving home late one night in the Nevada desert, when he stumbles upon an injured and disheveled old man (Jason Robards) lying face-down in the dirt. Good-natured Melvin offers to drive him to the nearest hospital, but the old man, who appears to be a wino, insists on being driven to Las Vegas. During the long drive, the man claims to be reclusive billionaire Howard Hughes, but Melvin thinks him crazy. By the time Melvin drops Howard off behind the Desert Inn ("Do you know somebody that works in the kitchen?" Melvin asks), the two have warmed considerably toward one another, especially after a brief rainstorm releases the sweet smell of sage just as the sun begins to rise.

Back at home, Melvin's life is not so great. Later that morning, his truck and motorcycle are repossessed, the final straw prompting Lynda (Mary Steenburgen), his long-suffering wife, to walk out on her perennially irresponsible husband, taking their pre-teen daughter with her. (Spoilers) But she can only find work as a stripper in Reno and, eventually pregnant, agrees to remarry Melvin. They move to Glendale, California, where Melvin finds work as a milkman. She becomes a contestant on "Easy Street," a kind of fusing of The Gong Show and Let's Make a Deal, and wins more than $10,000 in prizes and cash, but instead of using their good fortune to get their lives back on track, Melvin falls back on his spendthrift ways, resulting in more unhappiness.

Then, some years later, Melvin, now working as a gas station owner and remarried to Bonnie (Pamela Reed), is named a beneficiary in the "Mormon Will" of the late Howard Hughes, naming Dummar heir to one-sixteenth ($156 million) of his fortune.

Star Paul Le Mat is chiefly remembered for his role in this and as John Milner, the drag racing king with no future in American Graffiti (1973). He seems to have been a difficult actor to cast, with his strange combination of cocky, working-class good looks but also a childlike sadness in his eyes especially, the look of someone struggling to remain optimistic after a lifetime of disappointment, buried deep inside him. Those qualities fit those signature roles perfectly. In Melvin and Howard, Le Mat's character is clearly kind-hearted. Scenes with his daughter show him a devoted father, but also a terrible provider. He practically worships Lynda but can't control that impulse to spend recklessly no matter how close to the financial brink his family's finances. To paraphrase a line from 1776 Melvin prefers to dream of striking it rich than face the reality of being poor, and that puts him at odds with the more pragmatic Lynda.

The movie operates from the premise that Dummar's story is genuine, but is it? Who knows? Courts eventually ruled the Mormon Will a fake, citing numerous misspellings and other inconsistencies. Others suggested Melvin's second wife, who had access to information about Hughes via her work for a magazine called Millionaire, conspired with Dummar to fabricate it. Later investigations suggested Dummar's story might have been true, based on supposed testimony from former Hughes employees remembering the reclusive billionaire speaking of his encounter with Dummar. In any case, hapless Melvin never saw any of Hughes's fortune.

The picture captures the backside of America's working class as few films do, often quite humorously. At the seedy Reno strip club where Lynda works, one of her fellow dancers has a broken arm in a heavy plaster cast, but she's there slugging away anyway. The game show scenes are dead-on in their inanity and Melvin's various homes all capture ‘70s kitsch furnishing authentically.

Jason Robards looks nothing at all like the real Howard Hughes, but delvers subtly funny and even touching performance. He's only in roughly the first fifteen minutes of the film, and then very briefly again at the end, but his scenes with Le Mat are what everyone remembers.

Presented in 1.85:1 widescreen and licensed from Universal, Melvin and Howard, mostly looks good, though the opening sequence, in the darkness of the Nevada desert, is full of digital artifacting, apparently an attempt to make the dark image more presentable. Thankfully, that issues vanishes after several minutes and the rest of the film looks fine. The mono audio (DTS-HD 1.0) is quite strong for what it is. No subtitle options but the disc is region-free.

Supplements include the usual isolated music and effects track, a trailer, and a repurposed, older audio commentary track with director Demme (who died in 2017) and production designer Toby Rafelson, ex-wife of Bob.

A real gem of a movie, Melvin and Howard is a DVD Talk Collector Series title.