Crosby and Hope take their act to Northeast Africa 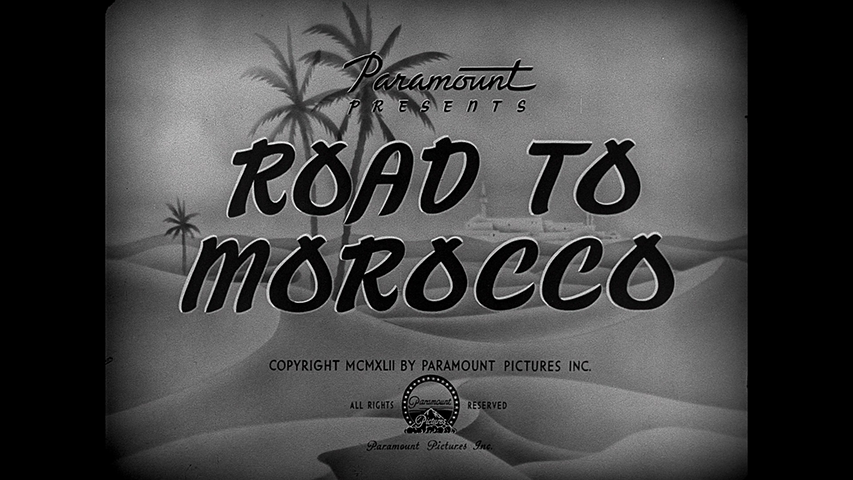 The adventure begins when a boat explodes, leaving two stowaways, Orville (Bob Hope) and Jeff (Bing Crosby), stranded on a raft on the ocean. The guys wind up washing ashore in Morocco, where they run into a friendly camel and try to run a scam, pretending that Hope is mentally challenged. But the action truly gets started when Jeff finds a way to raise some cash, by selling Orville into slavery. What he doesn't know is he sold Orville into the service of Princess Shalmar (Dorothy Lamour), who plans to marry Orville.

As is usually the case, a competition for the girl emerges between Hope and Crosby, and, also as usual, the girl isn't being quite honest about her intentions (an element that is both progressive and regressive, as the woman is smarter than the guys, but also can't be trusted.) However, as is the norm with these Road to… movies, the plot is hardly a main concern. The focus here is the interplay between the leads, which remains as strong as ever, as escape plots and romantic competitions are all the material needed to give Hope and Crosby a chance to play, though the final act actually has some story to it for once, as Hope and Crosby need to team-up. 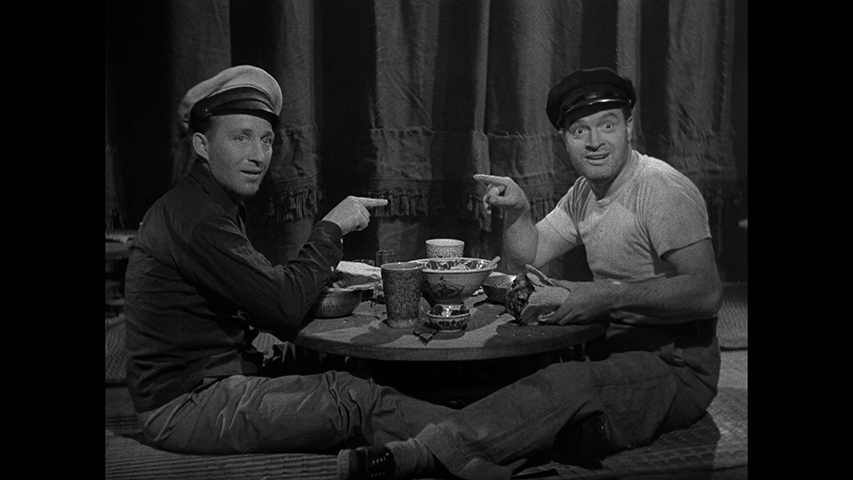 Though the Road to… films have been marked by a meta sense of humor, as the characters have made references to being in a film and break the fourth wall at times, Road to Morocco takes this element much further, with the theme song being heavily focused on references to being in a movie, and odd gags involved switched voices and talking camels. That level of silliness ties in nicely with the Hope/Crosby dynamic, as they seem to exist outside the bounds of reality, doing whatever they feel like, whether it makes any kind of logical sense or not.

None of this would work if it wasn't for the stars, as Hope and Crosby ooze charisma, particularly Hope, who may have been the perfect comedic actor, able to draw laughs with a line or a look. Somewhat sarcastic, but mostly goofy, with a risque edge. Crosby is more of the straight man, though his dialogue is often sharper, but his real contribution is the songs he sings, the reception of which will always be a matter of taste, as they tend to be of the easy-listening variety. Of course, Lamour is the secret weapon, able to combine the best of Hope and Crosby, though she doesn't get to show her funny side as much as the guys.

Since this is a film from the ‘40s set in a foreign country, you know it's going to be at least a bit racist, and there's certainly a good deal of stereotypical depictions of Muslims and Muslim culture, as well as the usual casting of caucasians in non-caucasian roles (I mean, Lamour as Shalmar alone…), but it's not the most insensitive film when it comes to such matters, and it doesn't really aim jokes at the Muslim characters. If anything, it's better considered unenlightened than bigoted, though the depiction of the mentally challenged isn't doing anyone any favors. 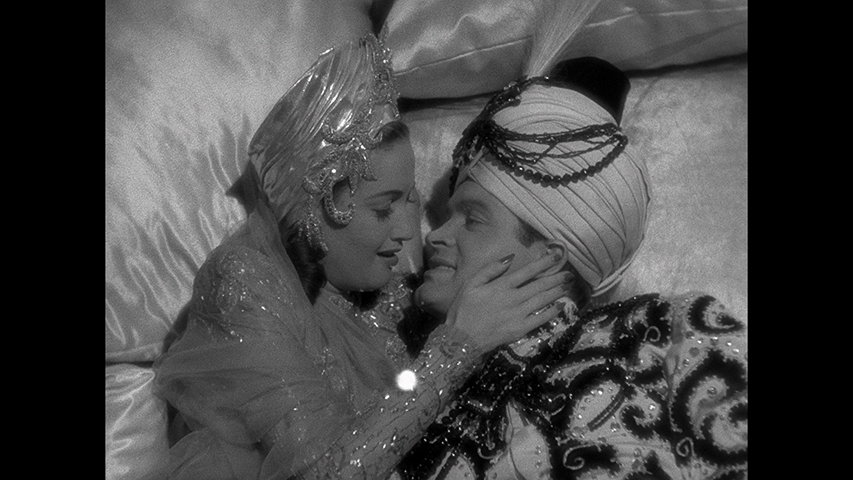 Kino Lorber brings Road to Morocco home on one Blu-ray, in a standard Blu-ray keepcase. The disc has a static menu with options to watch the film, select scenes, adjust the setup and check out the extras. There are no audio options, but subtitles are available in English.

The 1.37:1, AVC-encoded 1080p transfer here doesn't differ much from the image on Road to Zanzibar, with an unfortunate amount of noticeable damage, including scratches and splotches on the film, even if the image overall is relatively solid, sporting a good amount of fine detail and a steady grayscale, though the use of special effects--like rear projection or optical inserts--are very evident as a result, as flicker is noticeable in these alternate sources. The film also can come off as exceedingly dark in spots (also an issue with Zanzibar) but this may just be a result of the filming. Grain is once again quite obvious, and can be somewhat distracting, even if it is consistent in the film.

Road to Morocco, especially during the action-filled climax, has plenty of activity for the 2.0 DTS-HD Master Audio track to handle, and the mix, whether it's the music, the dialogue or the effects, is all well delivered. The era of recording is evident in the low-level hiss you can spot during the track's calmer sequences, but it is hardly something most would notice, especially with how active the film is aurally.

In a welcome addition from Kino, film historian Jeff Theakston provides a fact-laden audio commentary for the film, covering the origin of the Hope/Crosby pairing, the careers of the folks involved in the Road to… franchise and plenty of details about the making of the film. The only issue is Theakston's attempt at a Hope imitation while reading a quote from the actor, which is no doubt bold.

Kino has also brought a pair of extras over from Universal's 2003 Bob Hope Tribute Collection DVDs. Also available on the other two Road to... Blu-rays, "Bob Hope and the Road to Success" (14:13) is a solid overview of Hope's career, built through interviews with authors who wrote about Hope and his friend Phyllis Diller, and illustrated with photos and clips of Hope's work. Diller, as she always was, is delightful here.

"Command Performance 1945" (5:05) is a filmed version of a radio show that delivered entertainment as requested by the troops overseas. Hope serves as emcee, introducing "Professor" Jerry Colonna and doing a bit with him about G.I. bonds. It's not nearly as entertaining as the version found on the Road to Zanzibar disc, but it still has historical value.

A Trailers From Hell episode on Road to Morocco (2:36) features John Landis chatting about the film over the trailer, talking about its influence on his work, the misogynist and and racist elements and the franchise in general. It's quick and fun, thanks to Landis.

A sing-along video of the film's title song (2:08) is available if you, for some reason, feel like doing Hope/Crosby karaoke.

Trailers for this film, Road to Singapore, Road to Zanzibar and Road to Utopia are also included. 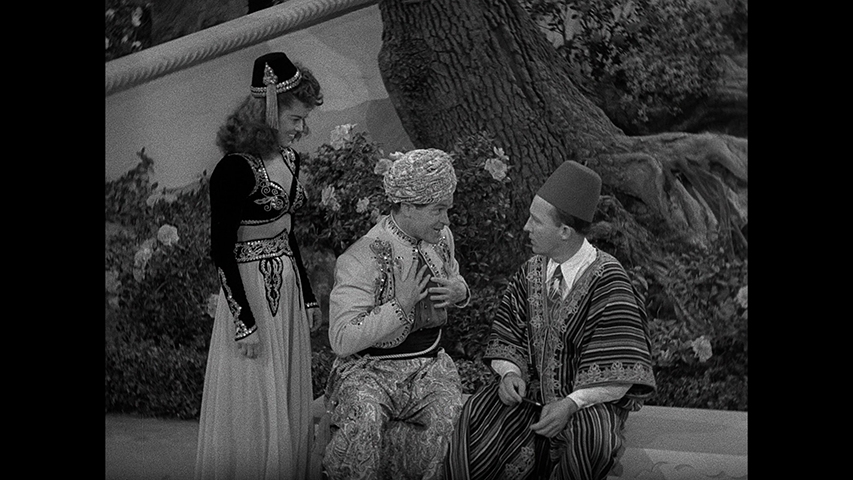 Road to Morocco sticks to the formula that the previous Road to… films established, giving Hope and Crosby room to do their thing without worrying much about the plot, with even more meta comedy and some of the better songs the franchise has delivered. The presentation is pretty solid, but looks its age, while the extras take a step up from the previous releases, making this likely the best selection if you want to own just one of the Hope/Crosby Blu-rays.