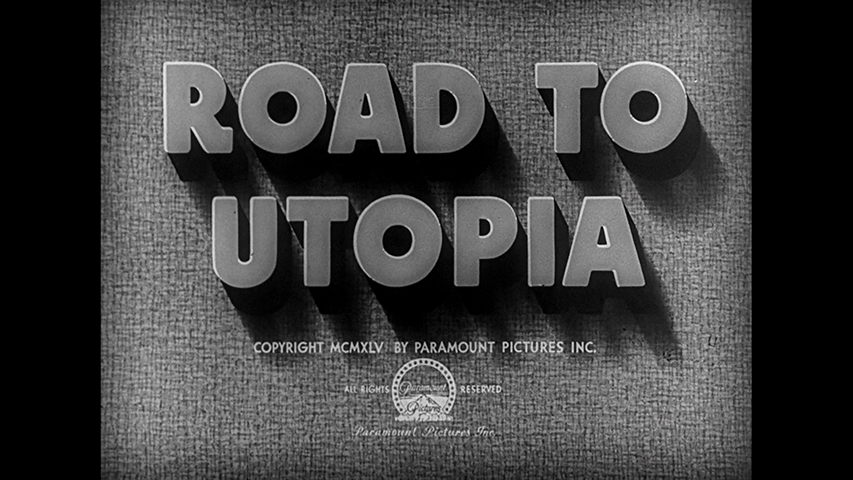 After several films traveling around warmer climates, Road to Utopia puts Bob Hope and Bing Crosby somewhere new, despite the attempts of Chester (Hope) to make his way to New York. The movie is the most meta yet in the series, as we start with Robert Benchley as the narrator, introducing us to the film and popping in from time to time to add his two cents. We then meet Chester and Sal (Dorothy Lamour), a rich, elderly couple who welcome Duke (Crosby), an old friend they haven't seen in 35 years, to their home (the three leads perform in well-done old-age make-up.) The film then tells the story, in flashback, of what happened between the three and in the years between, after Chester and Duke sought their fortune in Alaska.

The film follows the same blueprint as the other Road to… films, as Chester and Duke are running a scheme--this time bilking people out of their money as vaudevillians running a faux-spiritualist gambling plot--but when they are revealed thanks to two bigger criminals on the run, they have to split town in a hurry, and thanks to Duke's quick wit, they are soon headed to Alaska and the lure of the gold rush, where they take up new identities. Unfortunately, the criminals are right on their tails, while Sal plays the guys against each other (as is usually the case in these films.) 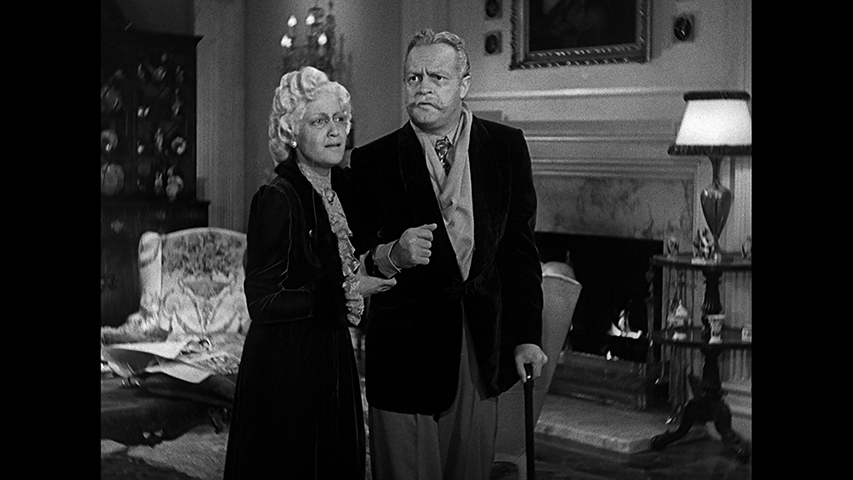 Surreal meta comedy has been a hallmark of the Road to… films, increasing in its presence from film to film, but Road to Utopia takes it to an entirely new level, turning the film into something close to a live-action cartoon. Whether it's Benchley's intruding narrator and a character's interaction with him, Hope addressing the audience and being censored at one point, the introduction of talking animals with animated mouths or even an appearance by Santa Claus. Sequences that would be completely at home in a classic cartoon, like the guys accidentally using a stick of dynamite as a candle, just hammer home that this film has a very loose connection to reality, and nothing should be taken very seriously.

For all the silliness at hand, Road to Utopia is the most impressive production yet in the Hope/Crosby collaborations, looking like a much bigger film than the others, with large crowd scenes, big action sequences, and some very impressive special effects, particularly in the final climactic sequence (the final third puts some modern films to shame with the amount of action on display.) Hope, Crosby, and Lamour are all at the top of their game, having more plot and character to work with and more freedom to be comic, while the songs are, on the whole, some of the best in the franchise, particularly Lamour's arousing performance of "Personality" and the classic Hope/Crosby duet "Put it There". When it all comes to a wrap, it's a satisfying, enjoyable ending, a rarity compared to the sudden stops of the previous films. 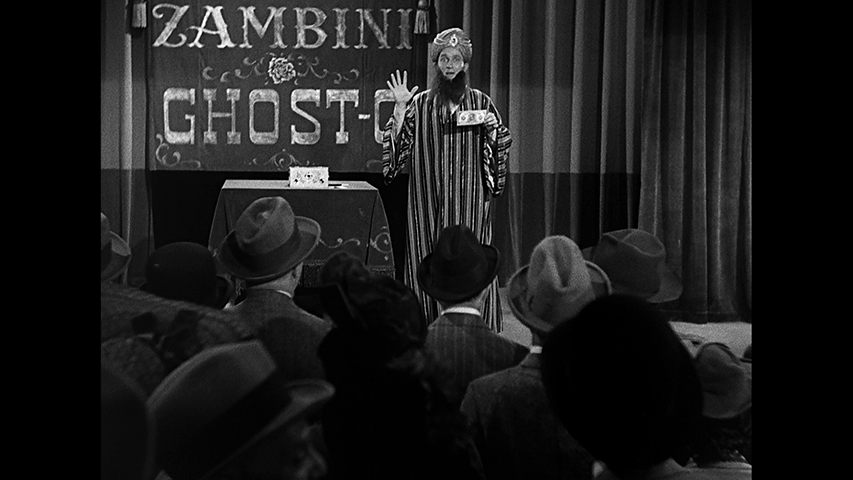 Kino Lorber brings Road to Utopia home on one Blu-ray, in a standard Blu-ray keepcase. The disc has a static menu with options to watch the film, select scenes, adjust the setup and check out the extras. There are no audio options, but subtitles are available in English.

Watching the four Road to… films Kino-Lorber has released in short order makes it very clear that Road to Utopia is absolutely the best looking of the group, lacking the damage seen in the previous films, while the 1.37:1, AVC-encoded 1080p transfer sports a steady, less distracting level of grain. The level of fine detail is quite nice (a scene featuring Hope and Lamour in fur coats shows this off beautifully) and though the image reveals the special effects in the clarity, it's not nearly as bad as Road to Morocco. Grayscale is clean and solid, and the overall picture is extremely pleasing.

There's a good deal of audio action in Road to Utopia, with a very active score, which the 2.0 DTS-HD Master Audio handles very well, and the music and sound effects are well mixed, while the dialogue remains solidly prioritized in the mix and sounds sufficiently crisp.

Filmmaker Greg Ford and film & music historian Will Friedwald dig into the background of the film, though with more energy than the more academic track on Morocco. There's plenty of info to share, putting the film into the context of film history, though they don't ramble just to hear themselves talk, even saying they'd rather hear Lamour sing at one point. It seems like the timing of the track to the film is a bit off, as references to on-screen moments come before they occur.

1945's Hollywood Victory Caravan (19:43) is a promotional short created as part of the effort to sell war bonds. A young lady sneaks into a movie studio to convince Bing Crosby to help her to visit her soldier brother. Lots of big names are on hand, including Hope, Barbara Stanwyck, Humphrey Bogart, Alan Ladd, and William Demarest. The short features a quartet of fun musical performances, from Betty Hutton (backed by a cadre of dancers), pianist Carmen Cavallaro, singer Olga San Juan, and, of course, Crosby.

Also available on the other three Road to... Blu-rays, "Bob Hope and the Road to Success" (14:13) is a solid overview of Hope's career, built through interviews with authors who wrote about Hope and his friend Phyllis Diller, and illustrated with photos and clips of Hope's work. Diller, as she always was, is delightful here.

Trailers for this film, Road to Singapore, Road to Zanzibar and Road to Morocco are also included. 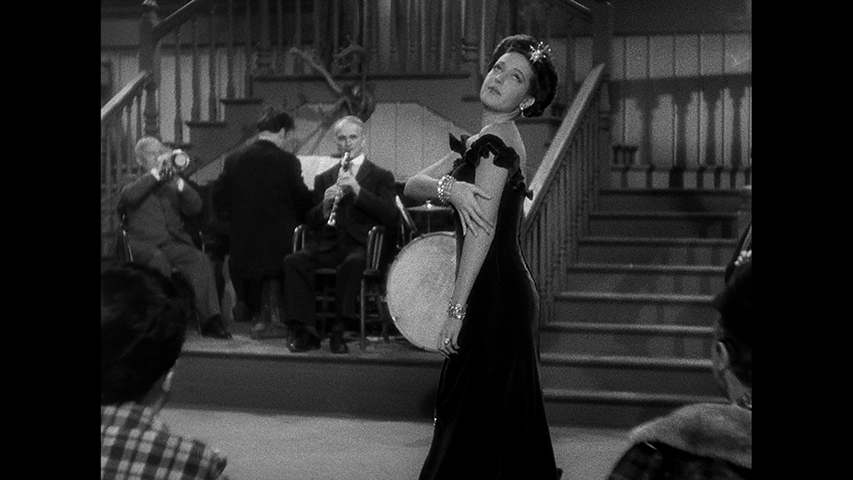 Though Road to Morocco is considered by many as the series' high-point, Road to Utopia is a bigger, more involved production, with even more of the franchise's surreal sense of comedy, and gives Lamour her best solo singing performance since Road to Singapore. Utopia even manages the feat of a genuine ending, rather than just suddenly winding up, as the other films did. The presentation is easily the best of the Kino Lorber Hope/Crosby releases, and the extras are the most extensive, with an entertaining, yet informative commentary and a historically intriguing short film.