Man Who Haunted Himself, The

Two Roger Moores for the price of one 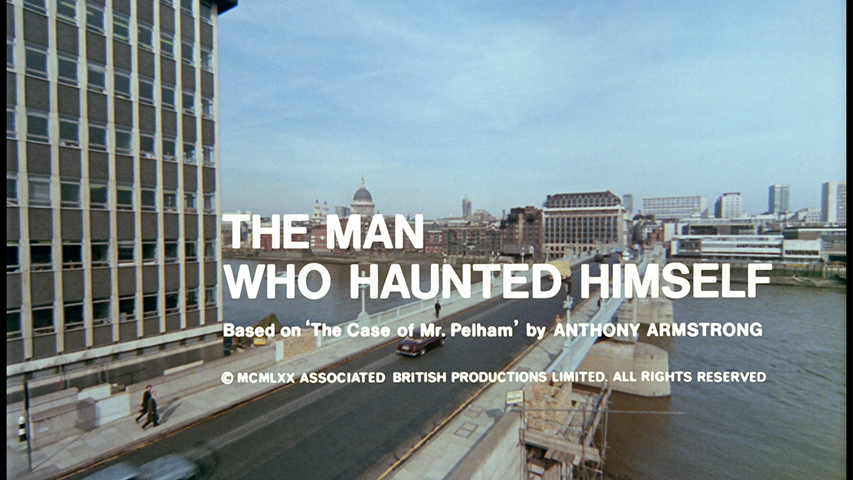 Roger Moore didn't need to be James Bond to be a star, as his roles in The Saint. The Persuaders and a slew of other projects were more than enough to make him a welcome sight on the screen. But once he became 007, the rest of his career fell by the wayside, and he was Bond, James Bond, and little else. As a result, films like The Man Who Haunted Himself, his last feature before getting his license to kill, are lesser-known parts of his filmography, and can be rediscovered decade later when released by labels like Kino-Lorber Studio Classics.

Moore plays Pelham, a partner in marine engineering firm in London, who lives a relatively idyllic life with money, a beautiful, loving wife (Hildegard Neil) and two children. One day, while driving on one of London's busy motorways, he suffers what could be termed a breakdown, undoing his seatbelt and driving like a maniac until getting into an accident that puts him in the hospital. On the operating table, he flatlines, only to return with two heartbeats, an issue rectified by a knock on the heart monitor, and Pelham makes a full recovery. 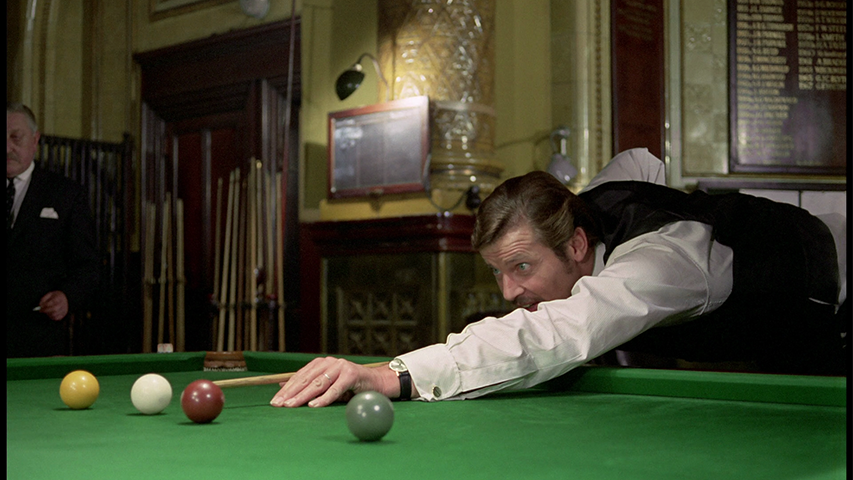 Returning to work, people begin telling him about things he's done and places he's been that he doesn't remember, including a comely young photographer (Olga Georges-Picot) he supposedly had a tryst with. Feeling like he's either forgetting things or losing his mind is bad enough, but he also has to deal with a leak at work that's jeopardizing a major business deal. The stress weighs on his marriage and his health, leading him to turn to a mental doctor for health, but he can't shake the feeling that someone is impersonating him.

As you watch the film, the story is really pretty clear from the jump--subtlety is not a strong point of this movie--and as a result, as Pelham is confronted again and again with stories of things he's been doing, the repetition begins to wear on you, and you start thinking, "I get it." The original novel The Strange Case of Mr. Pelham was adapted into an episode of Alfred Hitchcock Presents, which checked in at a half-hour, which was probably the right length for a story that's more clever than deep. The attempt at adding more to the plot, including the business element and the more involved conclusion resulted in making the so-called twist even more obvious and the film more padded, while the ending became more inscrutable. You can take a stab at explaining what happened and what it means, but you'd likely be guessing.

That doesn't mean there aren't things to like about The Man Who Haunted Himself, a film that looks and sounds great, with a lot of visual panache and an effective soundtrack, which builds a legitimately tense atmosphere--at first. The cast is also solid, with Moore ably anchoring the movie with his appealing presence and amusingly low-key depiction of a freakout. Georges-Picot struggles performing in English, but it's hard to hold that against her since she was likely cast for reasons other than her emoting (which is rough to watch), but Neil is another in a long line of wonderful British actresses who have worked consistently, if not prolifically over the years. She is a big part of why the film works as well as it does, as she grounds everything in the reality of her character. 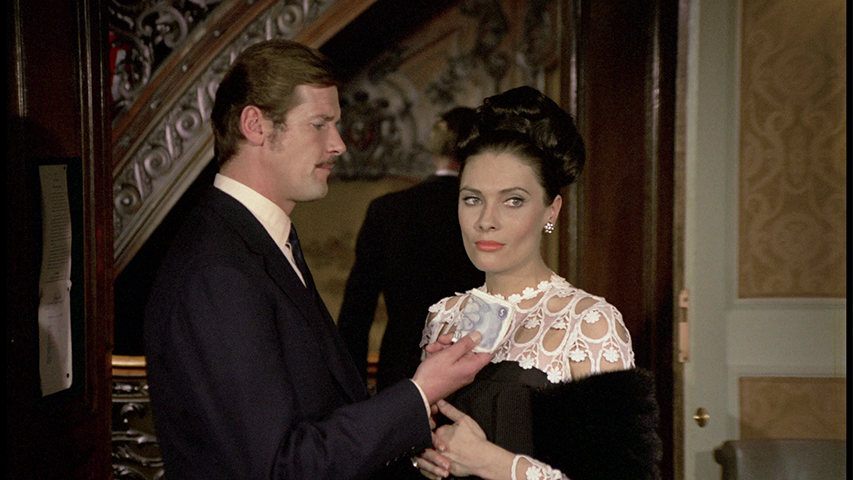 Kino Lorber brings The Man Who Haunted Himself home on one Blu-ray, in a standard Blu-ray keepcase (the cover, which reworks an original poster, though evocative, isn't as nice as the 2013 Network Blu-ray cover.) The disc has a static menu with options to watch the film, select scenes, adjust the setup and check out the extras. There are no audio options, but subtitles are available in English.

There's no mention of a new master here, but the 1.85:1, AVC-encoded 1080p transfer on The Man Who Haunted Himself is straight-up gorgeous. The colors are rich and well-saturated, the level of fine detail is wonderful and the image shows no signs of dirt or damage (which unfortunately makes a certain special effect way more obvious than it should be, but it's a trade-off worth making.) The whole thing has that luxuriously warm feel of ‘70s cinema, with a healthy, but unobtrusive layer of grain to really set that filmic look. When a snooker game is being played, the red of the snooker balls is just about perfect, and a shot of Georges-Picot lying naked in the sheets of her bed shows perfect skintones, while the final stretch of the film, which plays with color quite a bit, looks great.

The main attraction here regarding sound is the music, as the film makes great use of an era-appropriate easy-listening score to create atmosphere early on, and the 2.0 DTS-HD Master Audio handles it quite well, mixing the dialogue and effects with the music to create an effective, well-prioritized listen. There are no concerns of any kind here.

Moore and uncredited writer/producer Bryan Forbes sat down for a commentary back in 2005, with journalist Jonathan Sothcott acting as moderator. Forbes offers lots of background on the business side of the production (an interesting element that affects a lot of the movie) while Moore offers his memories of making the movie and his perspective on what's going on, while also providing morbid updates on his now-dead castmates (which is only worse with his passing.) It's a very low-key track, but one with plenty of insight, not just about the film but about Moore's career as a whole.

"The Man Who Haunted Himself Viewed by Masters of Horror" (18:07) features respected directors and horror-film experts Joe Dante and Stuart Gordon, as they discuss the original source material and Alfred Hitchcock's first adaptation of the story, before discussing the themes in the film, the visual style and Moore's performance. It's great to hear the perspective of knowledgeable authorities, especially when they are as entertaining as Dante and Gordon.

You can watch the trailer for this film (3:09) and it's very specific way of promoting the film, but wait until you're done watching the movie, as it gives away too much of the film. Also available are trailers for a trio of other Roger Moore films: Gold (3:55), Street People (2:32) and The Naked Face (2:10). 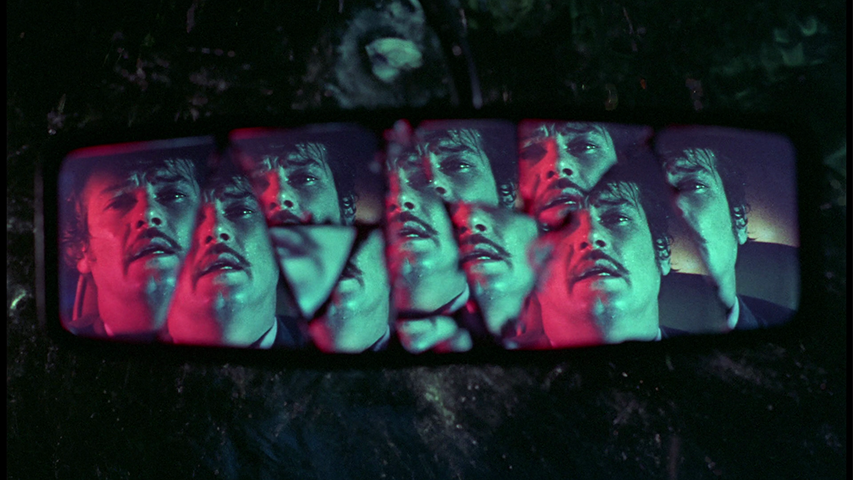 Having a chance to discover a non-Bond film by Roger Moore, an actor who is routinely enjoyable to watch, is always welcome, and there would be no complaints about sitting through The Man Who Haunted Himself if it was a The Twilight Zone episode. But when you stretch a somewhat simple story out to feature-length, cracks begin to show, and a sense that the plot is dragging is hard to shake. The presentation is excellent however, and the extras help make it a package that Moore fans or those who enjoy British cinema of the ‘70s will want to check out.