Trying to make up for being a bad person 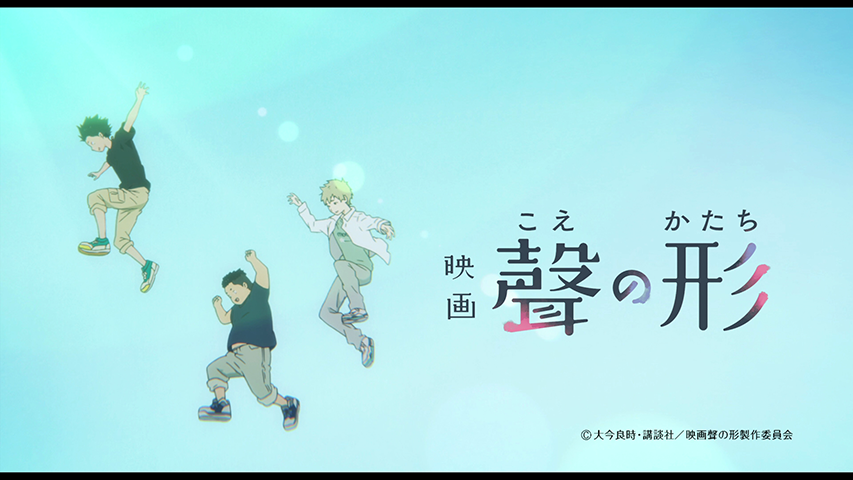 Directir Naoko Yamada, who later directed the somewhat divisive Liz and the Blue Bird, has nailed down a spot as a chronicler of teen angst, a fact made very clear with her manga adaptation A Silent Voice, the story of Shoko, a deaf girl who was relentlessly bullied by Shoya, a punk kid in her school. After a run of constant abuse, including having several expensive pairs of hearing aids destroyed, Shoko leaves the school, and everyone turns on Shoya, leaving him on the outside looking in. The situation leads Shoya to consider suicide as a young adult, going as far as to empty his bank acount and sell all his possessions, only to change his mind at the last minute. Then he sees a grown-up Shoko, and tries to make amends for his past behavior.

The story is somewhat all over the place--partially a result of the story being told out of order, with flashbacks and leaps forward, not to mention a tom of storylines. There's a subplot involving Shoya's first new friend--a clingy hanger-on who idolizes him--and a storyline involving Shoya's friend who wants Shoko to keep his distance, while some of the classmates from Shoya and Shoko's time together at school--who were either implicitly or explicitly involved in the bullying--are each looped back into the drama between them today as Shoya tries to prove he's changed, going so far as to learn sign language. 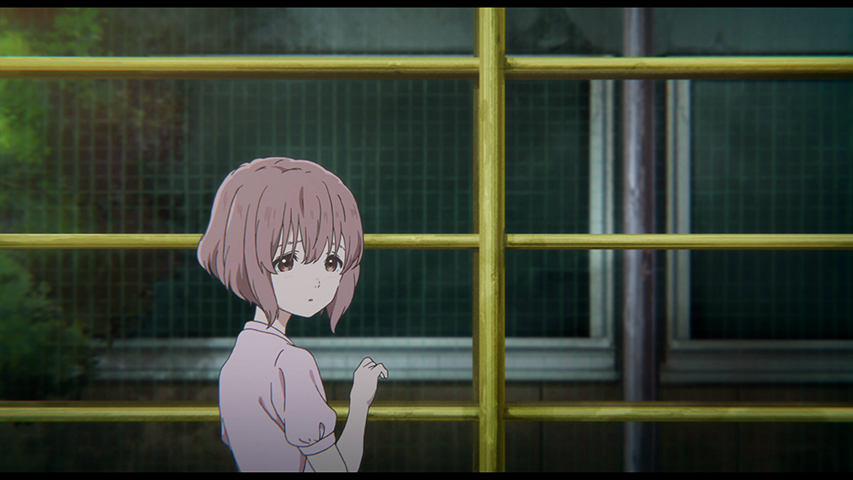 The themes of redemption and friendship are muddled a bit by characters who argue that it's not their fault their lives were intruded on by someone who brought their own situation onto them, not to mention the fact that it's hard to understand why Shoko is more than willing to accept Shoya back into her life, though certainly there's the chance that she's just lonely. The film doesn't explore what life is like for someone who is deaf to any great degree, so there's not a lot of context for her behavior or decisions. The presence of Ueno, a popular girl who refuses to stop bullying Shoko, even years later, doesn't help the confusion, as she seems to be there to suggest some sense of justification for their actions, which is entirely difficult to accept. Her brutality toward Shoko, and even Shoko's mother, is just hard to watch.

Checking in at 130 minutes, there's a lot of space to fill, but it never feels like it's dragging or padded, only potentially overstuffed with characters and trauma (the result of adapting a lengthy series.) Shoko is so constantly put upon, your heart breaks for her, including in a very effective wordless scene that just twists the knife a bit deeper. A Silent Voice is not really a feel-good movie in any way, more a tearjerker than anything else, on a level that most movies don't touch when it comes to the treatment of its heroes. Even when they are at their lowest point, the film finds a way to kick them while they are down, with the final stretch being particularly cruel.

While the story is often ugly, the film itself is beautifully animated, using visual metaphors to express what would otherwise be said with words. The motif of physically blocking out the faces of people Shoya can't bear to look in the face is rather striking, as is the use of what seems to be either CG animation or treated footage of a roller-coaster and fireworks, which result in images that really make an impact. This is anime as an expression of personality and emotion, rather than the popular bombast and chaos, and it helps provide a bit of a buffer between the viewer and the struggles Shoko suffers through. 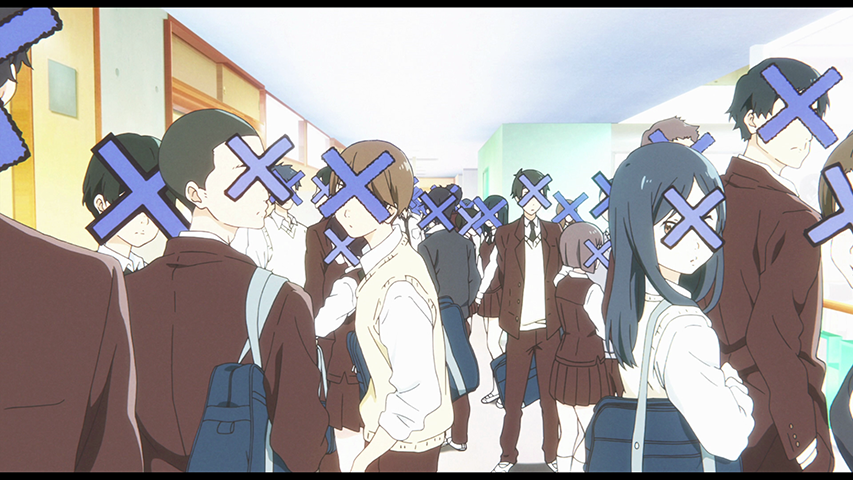 Shout Factory delivers A Silent Voice in a two-disc set--one Blu-ray, one DVD--in a dual-hubbed, standard-width Blu-ray keepcase, with a slipcover that repeats the cover art. The disc has a static menu with options to watch the film, select scenes, adjust the setup and check out the extras. Audio options include English and Japanese 5.1 DTS-HD Master Audio tracks, while subtitles are available in English SDH and English (on the Japanese version.)

The 1.85:1, AVC-encoded 1080p transfer here is beautiful to behold. Leaning to a more minimalistic, pastel-hued style, the film is often gentle-looking and feels very much like a manga come to life. Color saturation is great and the level of fine detail is excellent, showing off when the animators showed off, making sure that the sign-language hand gestures are clear and easily understood, while small details in the backgrounds are unmistakable (check out the photos on the walls in Shoko's home for an example.) There are two moments where the animation style changes, during an amusement park scene and during a nighttime festival, and the results are beautiful, even if it's not exactly clear what is going on with the animation (could be CGI, could be rotoscoped film.) Either way, the film looks terrific and shows no evidence of digital distractions or any other problems.

As someone who prefers subs to dubs, the 5.1 Japanese DTS-HD Master Audio track was the preferred listening experience here, and it delivers. Dialogue is the order of the day, but there's a good amount of music present, along with some well-placed sound effects, and nothing sounds out of place or incorrectly positioned, with the surrounds helping to round out the soundfield with the score and ambient sounds. The use of The Who's "My Generation" in the title sequence is quite powerful. The English dub isn't bad, though the girls can be a bit obnoxious at times with their cutesy delivery and Shoya is very familiar, to the point of near-distraction. The only oddity occurs late in the film, during a particularly sad sequence, where the sound gets almost "dirty" like it had some sort of distortion or filter applied. It's possible this was a stylistic choice, but it stood out as unusual, as there were no similar moments elsewhere in the movie.

"Speed of Youth" (1:54) is a music video by Naoka Yamada, which fits clips from the film to the instrumental song. It's a light, dance-like track, and the visuals work well with the music, but it's not something that will get repeated views. There's also a music video for the film's theme song (3:50), which is a very enjoyable tune that fits the movie well.

Wrapping up the extras is a selection of six Japanese promotional videos and trailers (5:58). Some of them are presented without English subtitles, so it's not easy to figure out what's going on there, but the subtitled trailers are solid promos for the film. 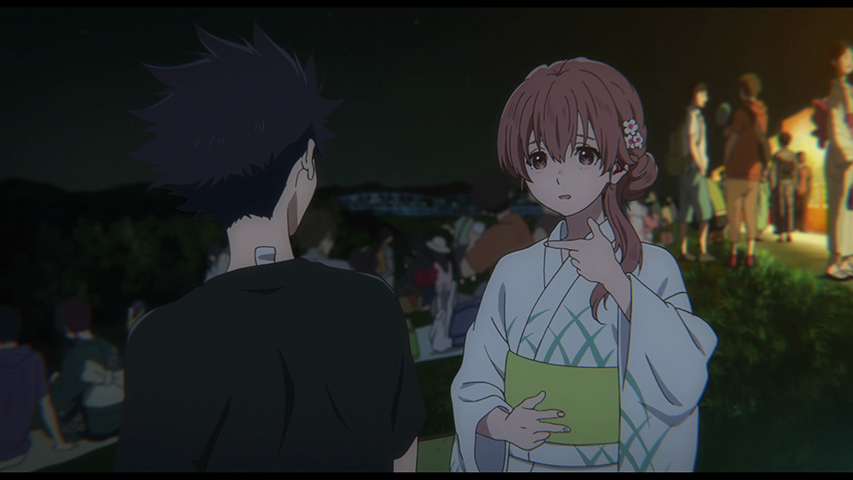 A difficult watch thanks to the connection the viewer makes with Shoko and the difficult life she has to live, A Silent Voice is nonetheless an impressive work of animation, and well worth the time it takes to watch it. The presentation is excellent, but the extras are sadly lacking. It would have been great to hear about the adaptation of the original manga, how decisions were made, or even just hear from the dub cast, especially Lexi Marman, the deaf actress who voices Shoko. As it is, the movie is the only real draw, so it may be one to check out before you dive in on a purchase.