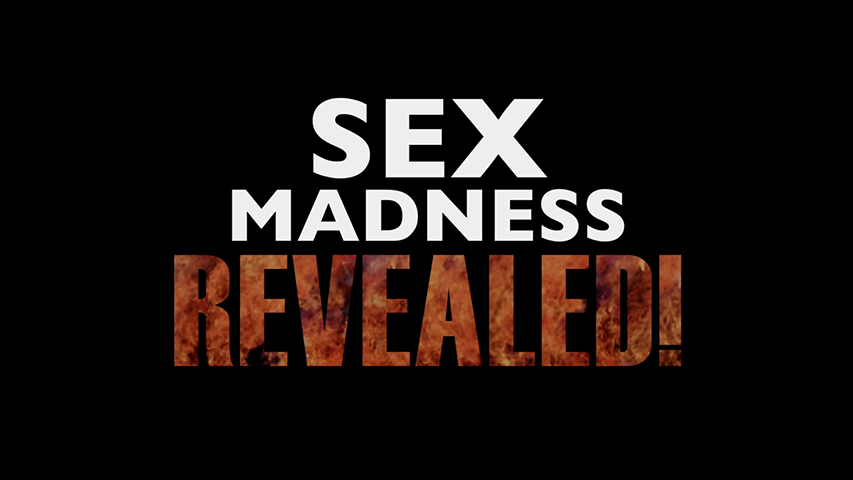 There was genuine excitement in approaching Sex Madness Revealed. First of all, it stars Patton Oswalt, who is worth watching in pretty much anything he does, be it straight comedy, serious films or anywhere in between. Secondly, it's an interesting idea, as the film is actually a commentary on an actual film, in this case Sex Madness, otherwise known as Human Wreckage. Though the package makes reference to Oswalt's role on MST3k, these are not quite the same, even if they both center on bad movies. Oswalt plays Jimmy, the host of The Film Dick podcast, which looks at old movies through synced commentaries. The film starts with an unseen listener tuning into a live episode of the podcast on their computer desktop, before diving into the film. This is a special episode, because Jimmy is joined by Dr. Chester Holloway (Rob Zebrecky), who claims that his grandfather directed the film and he wants to share the backstory with Jimmy.

As they watch the film, Jimmy shares the movie's history and some notes on elements of the low-level production that he enjoys, while Holloway talks about why his grandfather made the film, spinning a tale about a shadowy Hollywood cabal of elites including Walt Disney and Dorothy Chandler, who traffic in sexual deviancy. Holloway becomes increasingly weird, needing assistance from his manservant Peterson, and the story grows in complexity, leading to a finale that you'll likely see coming. 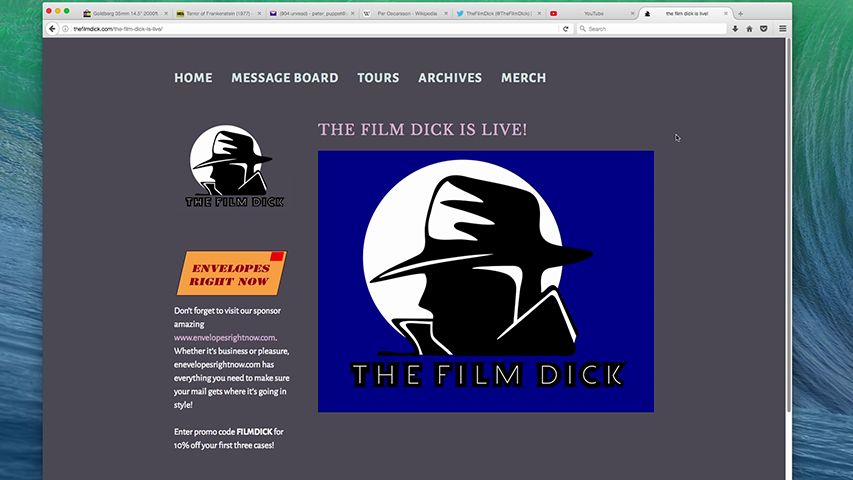 In fact, you'll see it coming for quite a while, as the film, which runs a little more than an hour, is basically a one-joke premise, and it drives that joke right into the ground. Part of it is the character of Holloway, who is played with little inflection and no sense of humor, which gives Oswalt little to work with in his role. The movie the film uses as the foundation doesn't help either, as Sex Madness lacks the bad-movie magic of films like Reefer Madness, which makes for a less-than-engaging experience. With so much repetition in the content; a telegraphed, yet disappointing conclusion, and a generally annoying presentation (Holloway has an oft-present cough that is just maddening), the film feels like a waste of Oswalt's talent and an interesting idea, for what could have been a decent SNL sketch. 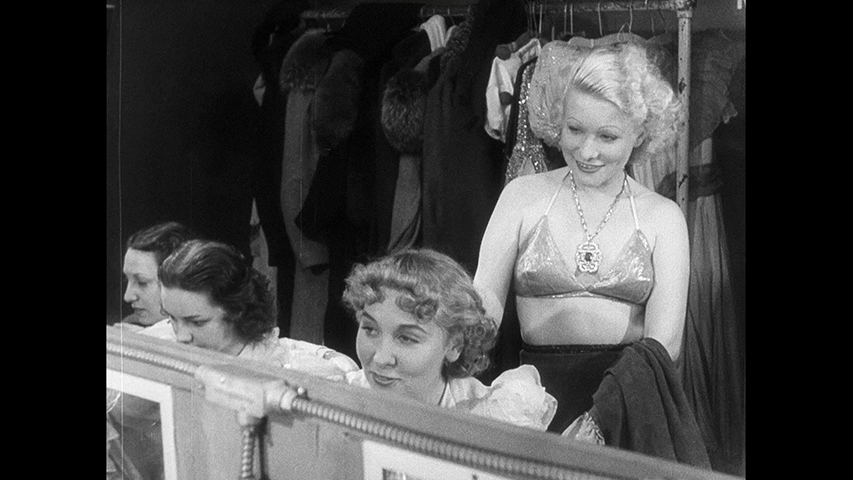 Kino Classics brings Sex Madness Revealed home on one Blu-ray, in a standard Blu-ray keepcase. The disc has a static menu with options to watch the film, select scenes, adjust the setup and check out the extras. Audio options include 5.1 DTS-HD Master Audio and 2.0 LPCM tracks, while subtitles are available in English SDH.

Presented with a 1.33:1, AVC-encoded, 1080p transfer, which was struck from a 2k restoration of the original film (per the director), the film (outside of the opening sequence, which is sharp as a tack) looks its age, but it could look a whole lot worse if you compare it to other versions of this movie. Yes, there are a good deal of scratches and damage to be spotted (large cigarette burns are evident in brief moments) but the overall quality is rather impressive, with solid contrast, consistent grain and a level of detail that lets you see background elements far better than you could in previous copies. There's certainly something to be said about maintaining that rough look for the authenticity of the concept, but this is a good presentation either way.

Outside of the final moments of the film, the difference between the 5.1 and 2.0 tracks on this film is negligible, as a commentary between two people doesn't exactly require much of your audio set-up. Their voices are kept sufficiently separated from the original film, but there's not much more to it than that. Score is limited to the opening and closing credits, and there are no complaints to be had in this regard.

The big extra is a commentary on a commentary, as director Tim Kirk and co-writer Patrick Cooper chat about the making of the movie, over the track in the film. They discuss how the story was developed off the original film, the correct pronunciation of Mario Puzo, how the ending came to be and info about the original film. One of the best parts of this track is how it's delivered, as the two participants are each given a dedicated channel of the audio, helping keep their thoughts neatly separated, and creating the feel that you're sitting between them as they talk about the movie. They also admit the film has slow patches, so the honesty is appreciated.

The original Sex Madness or Human Wreckage (59:24) is available to watch without the film's artifice, but it doesn't hold up like other "classic" films of the genre, lacking in many outright terrible elements, and coming off more bland and boring than anything else.

"Other Side with Zabrecky" is a 6:19 short about a seance--with Will Forte and Oswalt's co-star Rob Zebrecky--attempting to contact the late comedian W.C. Fields. Done with a faux-damaged, glitched-out style, it takes a moment to get going, before becoming just ridiculous, mixing clips of Fields with images of Forte and Zabrecky. Expectations were low, but it really is quite amusing.

Wrapping things up is a 52-second teaser trailer for this film, that makes it look a lot better than it is, and a 46-second trailer for Director's Commentary: The Terror of Frankenstein, the creator's first commentary film. 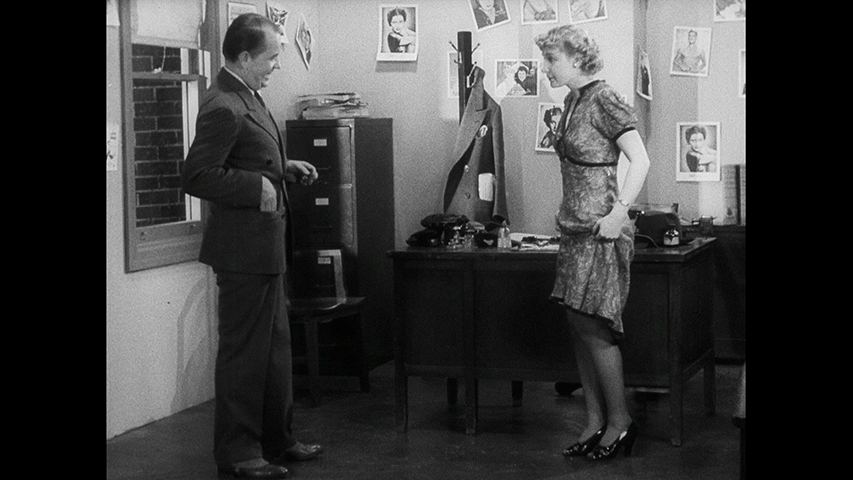 The appeal of Sex Madness Revealed was instant, with Patton Oswalt as the star and an interesting concept, but watching the film, not even Oswalt's enthusiasm and charm could overcome an idea that was a better fit for a sketch than an hour-long film, as the game became quickly evident before being overdone. The presentation is solid and the extras are worth a look, but the film is just too much of a disappointment to have in your collection.