Great Scout and Cathouse Thursday, The 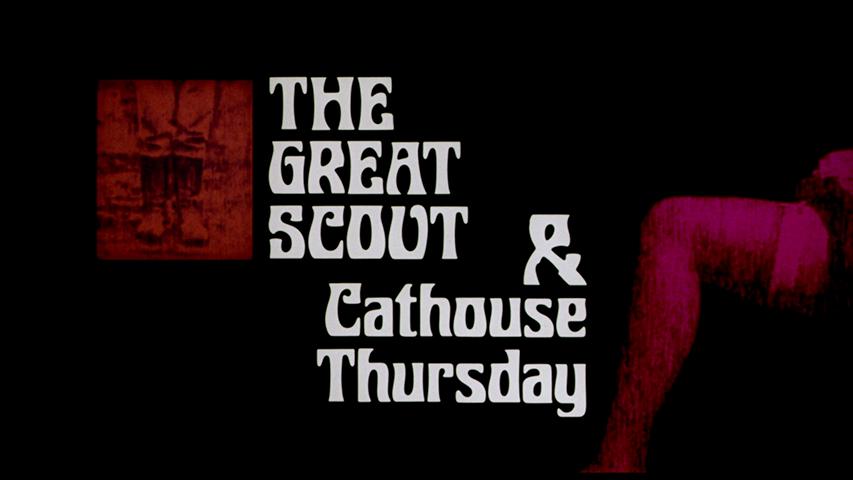 The trailer for the awkwardly-titled The Great Scout and Cathouse Thursday promises an outrageous, over-the-top western comedy not unlike Blazing Saddles, which was a smart box-office strategy, considering the Mel Brooks classic came out a few years earlier to wild acclaim as the highest-grossing film of 1974. The only problem is, the film it promotes is nothing like the movie that was released, a dour, plodding tale of western revenge, with ham-fisted attempts at broad comedy, surrounded by remarkable misogyny. Even before a more enlightened time, this movie was uncomfortably comfortable joking about rape and the treatment of women, in a way that doesn't feel like much of a joke.

In 1908, tough guy Lee Marvin is Sam, a former Army scout who now keeps busy by running scams on unsuspecting folks out in Colorado. He's friends with a drunkard named Billy (Strother Martin) and Joe Knox (Oliver Reed), a half-breed "Injun", who is one of the more interesting, yet wholly uncomfortable depictions of a Native American on film, as he's a man whose white heritage allowed him the privilege of education, yet he portrays himself as a violent, drunken savage, aided by scalps which were purchased rather than claimed. However, when he steals a police wagon full of recently-arrested prostitutes and claims them for his own--naming them after the days of the week he'll use them--it doesn't feel like much of an act anymore. 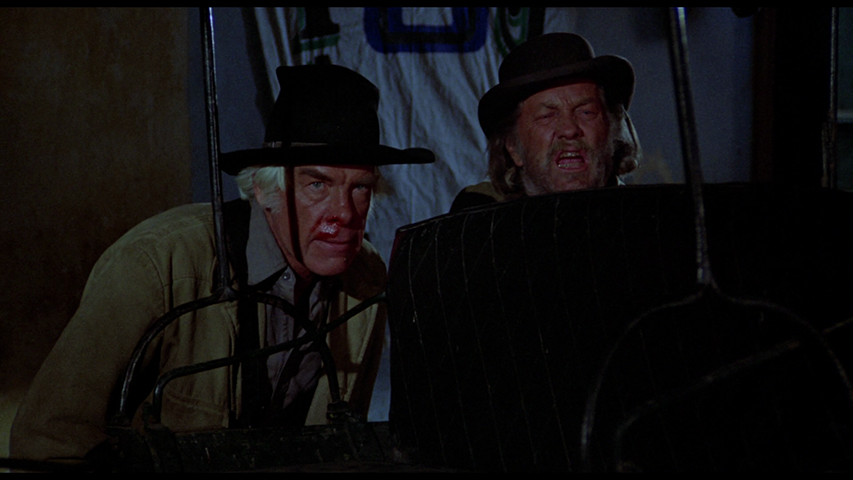 Sam, Joe and Billy happen to come across Jack Colby (the ever-enjoyable Robert Culp), their former mining partner, who ripped them off to the tune of $60,000. So they formulate a plan to kidnap and rape Colby's wife--Sam's former flame--to get their revenge. Rape is a big element of this film, whether it's the threat of it or confusion over why Joe wouldn't rape the titular Thursday (the delightful, but under-utilized Kay Lenz). Misogyny is basically a genre for this film, with women treated terribly at all turns, whether by our heroes (?) or the bad guys, up to and including women being slapped and punched. It's a film that posits that rape is a better fate than being forced into lesbian servitude, a sentence that probably never needed to be written. Sure, the ‘70s weren't exactly "woke", but this film seems to try extra-hard to showcase awful behavior.

Written and directed by the TV veteran team of Richard Shapiro (creator of Dynasty) and Don Taylor (though Taylor also was behind the camera for a number of respected films, including The Final Countdown), The Great Scout and Cathouse Thursday looks and feels like a TV movie, right down to the slapstick comedy that was tired even when the movie was released. A scene in which Marvin and Reed are sprayed with a hose for an extended period of time is just an embarrassing attempt at a laugh, and Marvin's reactions to surprises are just this side of Charlie Callas in their lack of subtlety. Perhaps if the film had the whip-snap rhythm of a TV show it would be one thing, but the pacing in this film is laborious at best. There are several points where it seems the film is ready to end, only to just keep on trucking.

It's interesting to note that this film is rated PG, despite much of the film discussing whores and rape, not to mention a scene with a handful of featured topless ladies (one involved in a sight gag about her uncovered breasts.) The ‘70s were certainly a different time, but it's surprising to see just how different they were. 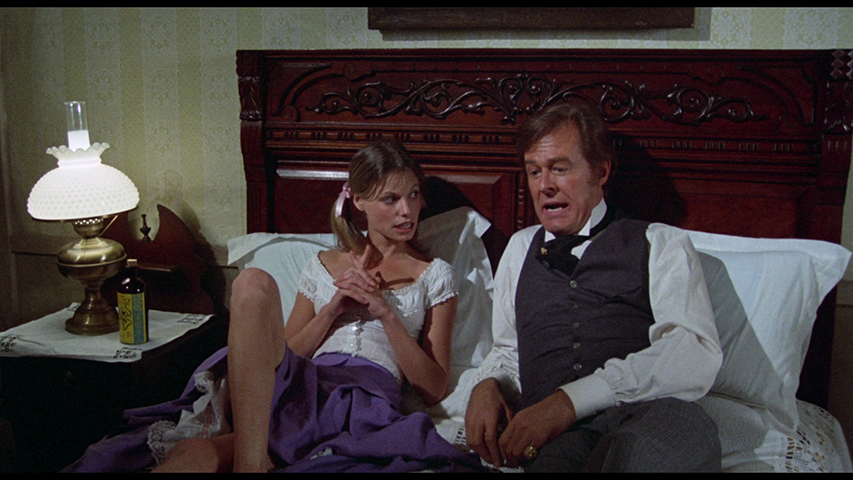 Kino Lorber brings The Great Scout and Cathouse Thursday home on one Blu-ray, in a standard Blu-ray keepcase. The disc has a static menu with options to watch the film, select scenes, adjust the setup and check out the extras. There are no audio options, but subtitles are available in English.

Though there's no mention of a new transfer here, the 1080p, 1.85:1, AVC-encoded image on this disc looks pretty darn beautiful, with no hints of digital enhancements or distractions gumming up the works. Color is rich and vibrant, and the level of fine detail is nice and high, showing off all the costumes (for both good and bad, considering how low-budget everything looks, with the exception of one large-scale outdoor scene. Considering this is a relatively little-known film more than 40 years old, expectations were low, but this presentation blew right past them with a very attractive presentation.

The 2.0 DTS-HD Master Audio track here doesn't have a lot of work to do in delivering the film, but it keeps the dialogue, sound effects and music appropriately present in the mix, without anything standing out in any real way. Sound effects in particular are just sort of there, and at one point it seemed like the audio dropped out, but it was just a matter of low-level atmospherics. There are no problems with distortion.

Perhaps recognizing the lack of genuine film-related extras, Kino has piled on the trailers, offering up nine in all, including the wacky promo for The Great Scout and Cathouse Thursday. 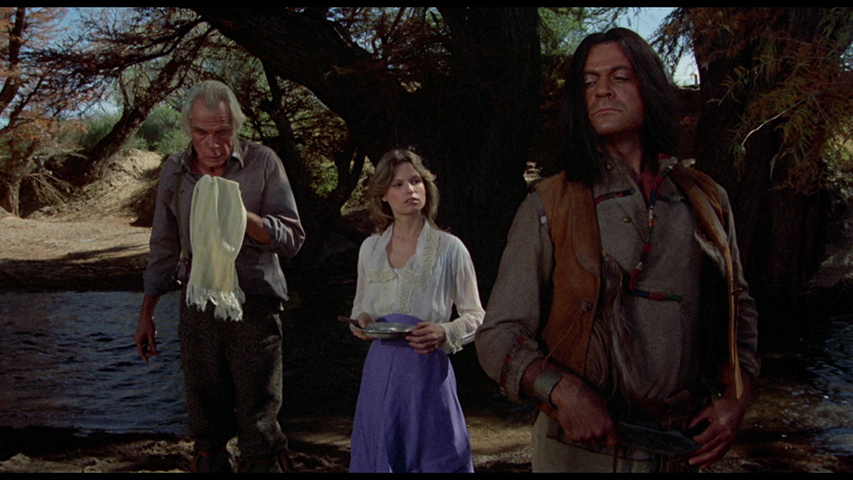 Hoping for something in the vein of Blazing Saddles resulted in disappointment, but if you're looking for any kind of comedy The Great Scout and Cathouse Thursday is likely to leave you cold, despite a solid cast. It just fails to deliver laughs, as it isn't quite sure what kind of film it's trying to be. Kino's Blu-ray, on the other hand, looks great and sports solid sound, but offers no real extras to speak of, so it's hard to recommend anything more than a rental as a curiosity, but most can just move on and watch Mel Brooks' greatness again.