How to Stuff a Wild Bikini

Olive Films // Unrated // June 25, 2019
List Price: $29.95 [Buy now and save at Amazon]
Review by Stuart Galbraith IV | posted June 28, 2019 | E-mail the Author
The sixth of seven AIP-produced "Beach Party" movies, How to Stuff a Wild Bikini (1965) is more of the same, with but a few differences. If, like this reviewer, you have a fondness for these admittedly unfunny yet amusing films, Olive Films' gorgeous new Blu-ray, licensed from MGM, is for you. If you can't fathom the crude charm of these pictures, well, you likely never will. (Bosley Crowther for one: he called this one "the answer to a moron's prayer.")

How to Stuff a Wild Bikini was the sixth film of what ended up as a seven-film series. It had been preceded by Beach Party (1963), Muscle Beach Party, Bikini Beach, Pajama Party (all 1964), Beach Blanket Bingo, and Ski Party (both 1965), and was followed by Ghost in the Invisible Bikini (1966). Except for the last film, all starred Frankie Avalon and Annette Funicello, though she has only a brief cameo in Ski Party and he has a much smaller part in How to Stuff, though longer than a cameo, maybe 5-6 minutes of screen time. Frankie and Annette did star in Fireball 500 (1966) after the Beach Party films had effectively ended, and would reunite one last time for the nostalgic Back to the Beach (1987), just as Funicello began noticing symptoms eventually diagnosed as multiple sclerosis.

The format peaked with Beach Blanket Bingo, the best film of the series, and the one even non-fans would probably enjoy if caught while in the right frame of mind. The first picture, Beach Party, had too much footage of "grown-up" stars Bob Cummings and Dorothy Malone, but set the series' format in cement. Comely, big-haired Dee Dee (Annette) loves compact fireball Frankie (Frankie), but she's looking for love and marriage while he's immature and hotheaded. The movies usually are set along the Hollywood-imagined beaches of Malibu, where the gang of Coca-Cola-sipping "kids" (played mostly by actors in their late 20s or early 30s) included regulars like Bonehead (Jody McCrea, the lookalike son of actor Joel), Johnny/Steve (aging AIP heartthrob John Ashley), and others who always run afoul of dim-witted and even more aged biker Eric Von Zipper (Harvey Lembeck) and his "sickle" gang of Rats and Mice. Von Zipper makes Huntz Hall look like an intellectual giant.

Others wanting to exploit one or more of the beach partiers would descend into their world. These roles were played by up-and-coming stars like Don Rickles or down-on-their-luck types like Cummings or, in this case, Mickey Rooney. There was usually a good musical guest (Dick Dale and the Del-Tones, "Little" Stevie Wonder, etc.), and the films often had fantasy elements, the best being Bonehead's sweet romance with mermaid Lorelei (Marta Kristen) in Beach Blanket Bingo. The movies always climaxed with a wild if awfully labored slapstick chase, Buster Keaton often turned up for comparatively subtler and always better sight gags, and there was a guaranteed surprise star cameo at the end. 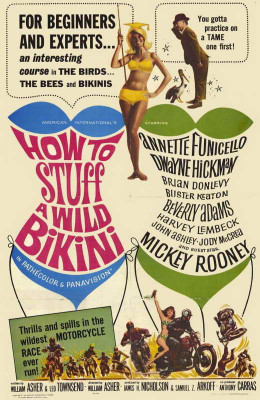 How to Stuff a Wild Bikini was the second Beach Party movie in a row to separate Frankie and Annette for most of the story. The reasons for this are unclear. Reportedly Avalon was busy shooting Sergeant Deadhead (1965), in a starring role originally intended for Tommy Kirk, like Funicello a former Disney Studios star. However, Deadhead didn't start shooting until after How to Stuff was completed.

Regardless, in the story Frankie (Avalon) is in the Naval Reserves stationed in Tahiti, enjoying the company of a sexy native girl (sexy Irene Tsu) yet is worried Dee Dee (Funicello) might be fooling around herself. Frankie enlists the aide of local witch doctor Bwana (Buster Keaton), whose potion allows Frankie to observe her through the eyes of a Malibu-based pelican. Further, Bwana sends a gorgeous sea nymph, Cassandra (Beverly Adams, soon to be become the wife of Vidal Sassoon), so that the overaged teenagers will be vying for her attentions instead of Dee Dee's.

The basis for the main plot, clearly, is the similarly-titled hit Broadway musical and subsequent film of How to Succeed in Business Without Really Trying. Advertising company president B.D. McPherson (Brian Donlevy) assigns Peachy Keane (Mickey Rooney) and Ricky (Dwayne Hickman, in another role intended for Tommy Kirk) to find a new face for his latest campaign. Ricky, the Robert Morse-type, wants to get Dee Dee into the sack, Peachy Keane is desperate to sign clumsy Cassandra to a long-term contract, while Eric Von Zipper anxiously changes his image because he wants to be the face of the new campaign.

Beyond luckless Tommy Kirk, it's pretty obvious AIP was hoping to re-sign Timothy Carey, who'd appeared in several of the Beach Party films as "South Dakota Slim," a psychopath who gives even Eric Von Zipper the willies. In How to Stuff instead of Slim his even meaner "brother" turns up, North Dakota Pete (Len Lesser, later Uncle Leo on Seinfeld). The two actors make an interesting contrast: Lesser acts really crazy; Carey was really crazy, and thus was far more convincing.

The splitting up of Frankie and Dee Dee doesn't hurt the film too badly (How could it?), partly because former Dobie Gillis Dwayne Hickman was at least as equally likeable as Avalon, even if his character is a bit of a rogue. The musical guests this time are The Kingsmen, who sing "Give Her Lovin'" rather than their signature tune, "Louie, Louie," but they're fine. The other 11 songs, mostly composed by Guy Hemric (who's also onscreen as one of Donlevy's yes-men) and Jerry Styner, are pleasant if forgettable, Annette's two songs coming off better than the How to Succeed-ish numbers. Funicello was pregnant at the time and while she hardly shows, wears frumpy clothes and hides her stomach behind all manner of things, including a bucket of a Kentucky Fried Chicken. As with AIP's Dr. Goldfoot and the Bikini Machine (1965), the clay-animated opening titles are the work of Art Clokey, Gumby's creator.

Filmed in Panavision, How to Stuff a Wild Bikini looks great, and as the previous home video version was a 4:3 letterboxed DVD, a most welcome release. The mono audio but good for what it is, and optional English subtitles are provided. Region "A" encoded.

For fans only, but for them this is escapist fun crude yet most satisfying. Highly Recommended.