Hedwig and the Angry Inch

A gorgeous, heart-rending musical on love lost and found 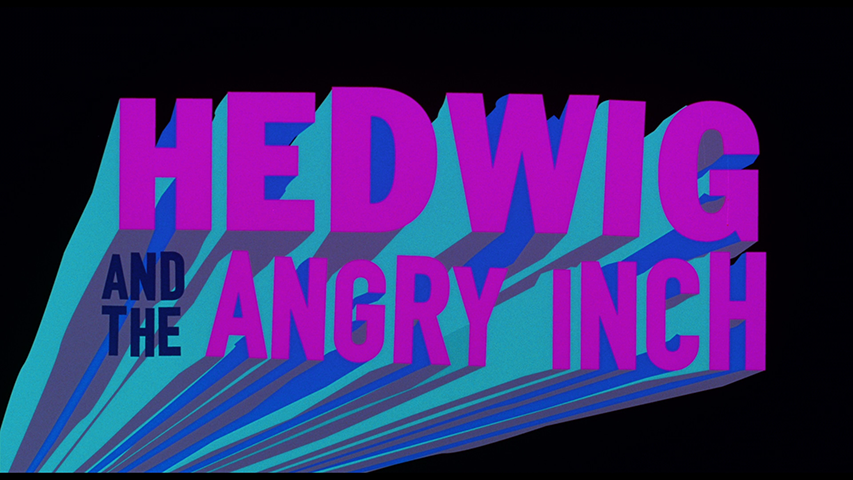 John Cameron Mitchell made his bones but foregoing subtlety on the surface, and hiding it deeper in his work. His film Shortbus, full of hardcore sex, is remarkably tender at its core, keeping its best treats for those willing to push past the orgiastic bombast and meet the people he cared about chronicling. His first film, Hedwig and the Angry Inch, adapted from the musical he developed with musician Stephen Trask, is very much in the same vein, as the tale of Hedwig (Mitchell), a trans punk-rock musician from East Berlin, tucks a touching story of a serially broken heart inside an outrageous rock-n-roll road movie told with visual panache and musical energy.

Told in a non-linear fashion that moves back and forth across the timeline of Hedwig's life, the film introduces us to Hedwig and their band--including their loyal, yet put-upon sidekick Yitzhak (Miriam Shur)--as well as their manager Phyllis (the hilarious Andrea Martin) and their far-more-successful rock nemesis Tommy Gnosis (Michael Pitt, in his first big film role), while explaining how Hedwig came to be the person we meet, through a number of heartbreaks and terrible experiences. There's surprisingly little in terms of present-day plot to this origin story, but that's not really the point of this character study. We want to know who Hedwig is and why Hedwig is Hedwig. 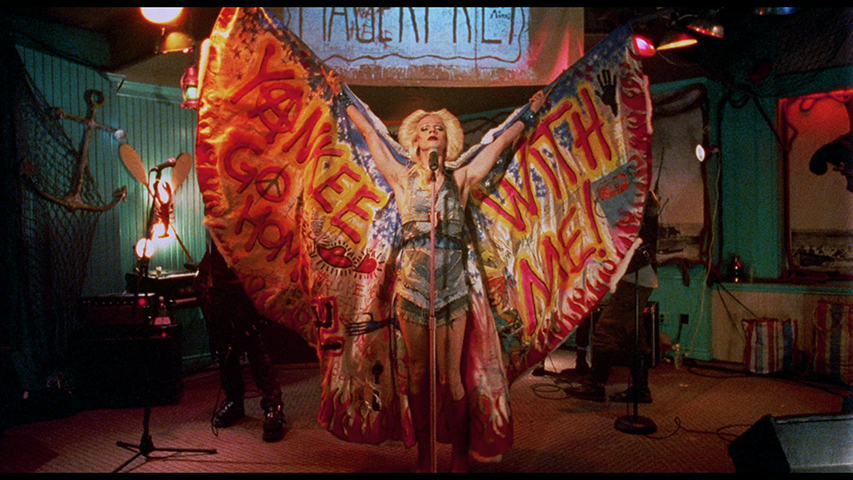 The film's songs do the heavy lifting when it comes to much of the exposition and character development, whether it's "Angry Inch"'s explicit explanation of the fate of Hedwig's genitalia, "Origin of Love"'s succinct explanation of Hedwig's view of love or "Wig in A Box" and it's internal monologue made external about the identity Hedwig adopts. But despite the storytelling they have to do, the songs are toe-tapping good times as well, with some all-time classic musical numbers, particularly the beautiful, simple and affecting "Wicked Little Town", while other songs are simply solid rock tune, like the perfectly positioned "Midnight Radio."

Despite this being Mitchell's first time behind the camera as a director, he makes his debut a tremendously confident one, crafting a movie that fully takes advantage of the possibilities inside the frame, be it in incorporating animation, unique set design or moments of fantasy that heighten the reverberations of a scene. Anything but straightforward in how it depicts anything on the screen, Hedwig and the Angry Inch is constantly dropping surprises for the viewer that keep the excitement and emotions high, never allowing you to settle in for long. Lots of films have attempted a non-stop climb toward the unique only to wear out or overdo it, but MItchell paces the film perfectly--aided by the need to reorient following time shifts--so we never build up a tolerance to Hedwig's highs. 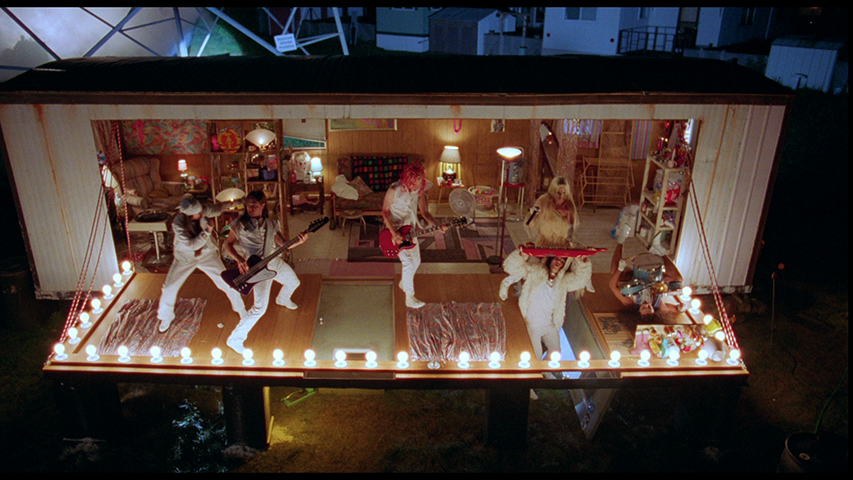 Hedwig and the Angry Inch (Criterion spine number 982) arrives on one Blu-ray disc in a digipak folder with an extensive 56-page booklet, held in a slipcase--all of which is designed with a punk-rock zine aesthetic. The traditionally-clean Criterion menu provides the choice to watch the film, select scenes, adjust subtitles and check out the special features. There are no audio options, while subtitles are available in English SDH.

The 1.85:1, AVC-encoded, 1080p transfer here was created under the supervision of Mitchell and his cinematographer Frank DeMarco, and was struck from a 4K scan of the original 35mm camera negative and interpositive, before receiving a thorough clean-up, resulting in a beautiful high-definition image that's easily the best most anyone has seen for this film. The film was shot on several different stocks, using a variety of techniques, and this presentation ensures they all look great, from the cool blue of the bleach-bypass scenes in Germany to the hyper-saturated Sirkian sequence between Hedwig and Tommy. Fine detail is excellent, with tons of production design, hair and costumes to benefit from such a display, while there's no evidence of any digital distractions present. Interestingly, in comparing with the previous DVD, the Blu-ray looks to have opened the matte more, showing more image in the frame.

The 5.1 DTS-HD Master Audio tracks do just what'd you'd hope for from a rock n' roll musical, ensuring the songs are powerful and strong (even on less aggressive tracks, like "Wicked Little Town") with the surrounds offering a boost to the main channel. Sound effects are well placed and prioritized (the subtle touches are often most effective) as is the dialogue, which is always easily understood, Distortion is not a concern.

The original New Line DVD, part of that studio's fondly-remembered Platinum Series, had a fine selection of bonus content, almost all of which was thankfully carried over to this release (with the only exception being an easter egg from the original DVD.) The archival extras get started with an in-depth commentary from Mitchell and cinematographer Frank DeMarco. This track is very focused on the technical details of filmmaking, which makes sense considering the participants, though it is anything but dry, as MItchell's charm informs the tone of the commentary.

When you follow a feature-length commentary with a feature-length documentary, there's a good chance that you'll end up with a good deal of overlap and repetition, but Whether You Like It or Not: The Story of "Hedwig" (1:25:28) is a mostly different experience, starting with a heavy focus on the development of the stage show, touching on the inspirations, themes and elements of the story, with plenty of footage from Mitchell's early days in the part, showing how quickly he zeroed in on the role. The story continues through the actors who picked up the wig from Mitchell when he stepped down and the fandom that developed, before moving on to the film adaptation, including the casting and construction. The level of detail on the development of the story and characters, and the info about the show's lo-fi start all make for an engrossing documentary that fans won't want to miss out on.

A selection of deleted or extended scenes return here, with 5 segments running 12:12 in all. There's more of Martin (always a treat) and a ridiculous concept excised from the film, as well as more of Yitzhak's story (unnecessary elements that were implied in the film, but interesting to see.) These are available to watch with optional commentary from Mitchell and DeMarco, who add perspective on the edits and details on the scenes.

Getting into the new bonus features there's "A Hedwig Reunion" (56:13), which brings together the key players from the musical's origins at The Jane Hotel (the show's original performance space.) The group discuss the show's origins and struggles to succeed, the film industry of the late ‘90s which encouraged the making of the movie, the legacy of the film and show internationally, and the themes and impact of the movie.

"The Music of Hedwig" (29:13) ifeatures an interview between Trask and music critic David Fricke (an early advocate of the show), in which they discuss the songs in the film and the influences of The Beatles on the songwriting. Personally, hearing how songs are composed is a thrilling experience, and this fits the bill.

"From the Archives" is a set of three short documentaries featuring Mitchell (18:49), costume designer Arianne Phillips (18:18) and make-up and wig designer Mike Potter (11:04), as they walk the viewer through their personal collections of memories from the stage show and film, including photos, sketches, reviews, press clips, videos, props and various other items. As the main creator, Mitchell obvious covers the widest ground, but Phillips gives a lot of insight into what it's like working on an ambitious low-budget film (and the films that influenced her) while Potter discusses an area not usually focuses on in film. For a fan, these make up a truly intriguing look at how the world of Hedwig came to be, as well as revealing the connection between the drag superstar and Dunkaroos.

A nice extra that Criterion has been adding, when it's available, is the inclusion of a Sundance Channel "Anatomy of a Scene" episode, and this one for Hedwig (19:20), focuses on the Adam and Eve sequence, following it through its development, with interviews with many of the creatives behind the film. There's footage from the Sundance Filmmaker Lab, as they work out the filming of the sequence, with discussion of how directing works when also acting, the challenge of adapting their plans to the physical filming location, the costuming and makeup, and the writing of the songs. If you care about how film is made and how collaboration works, this is an exciting look behind the scenes.

The final on-disc extra is the film's theatrical trailer (2:22), which exhibits the film's varied tones and energy well, but which hides the darker side and tries to sell the film to a mainstream audience it never really found.

The extras wrap up with the 56-page booklet designed ever-so-appropriately as a zine, featuring the usual disc and movie details, along with an essay by film critic Stephanie Zacharek, text from two works that influenced the movie--Plato's The Symposium and the gospel of Thomas, and a ton of photos and artwork related to the film. This booklet alone almost makes it worth picking up this release. 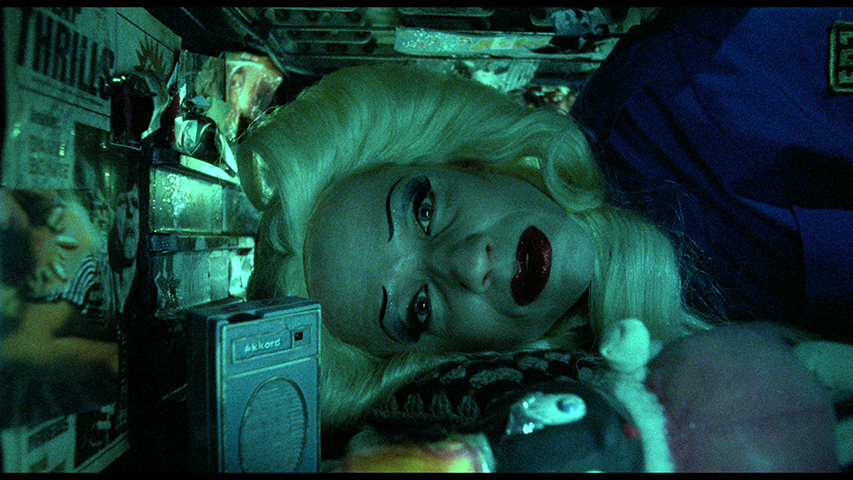 Hedwig and the Angry Inch is a stunning work of true art from all angles, its brash, enthusiastic punk-rock energy standing in harsh contrast to the gentle, heart-felt story, characters and themes. The music is outstanding throughout, but the work by Mitchell, along with his collaborators, in front of and behind the camera, to tell the story of an unfortunate soul given little chance at happiness, in an imaginative, visual method, is the reason why this film remains striking and affecting almost 20 years after its poorly-received release. Criterion has done right by the movie, delivering it in beautiful condition, with the impressive extras previously released being joined by solid, informative new additions. Certainly there are plenty who look at the very concept of Hedwig and the Angry Inch and turn the other way, but they are missing out on something very, very special.