Twilight Time // PG-13 // Region 0
List Price: $29.98 [Buy now and save at Twilighttimemovies]
Review by Stuart Galbraith IV | posted July 1, 2019 | E-mail the Author
Bandolero! (1968) never makes lists of the all-time great Westerns, but it is vastly underappreciated. A big, expensive studio film starring James Stewart, Dean Martin, and Raquel Welch, and directed by Andrew V. McLaglen, Bandolero! was the type of mainstream Western gradually falling out of favor as Spaghetti Westerns like Sergio Leone's The Good, the Bad, and the Ugly came into prominence, while the abandonment of the long out-of-date Production Code was giving way to a more permissive ratings system that would soon bring about revisionist Westerns like Sam Peckinpah's The Wild Bunch (1969).

The big studios didn't adjust to these changes well. For instance, when Clint Eastwood returned from Italy to star in Hang ‘Em High (also 1968), that film adopted a clumsy, pseudo-Spaghetti style that didn't work. Bandolero!, on the other hand, was a rare exception to the rule, mixing traditional and revisionist elements, expanding upon Stewart's earlier Western characterizations for directors Anthony Mann and Delmer Daves, while in some respects even anticipating the violent films of Peckinpah and others. There's little in the way of onscreen blood and guts, but Bandolero! is, for its time, quite violent. There are some wonderful humorous moments throughout but also unexpected tragedy. 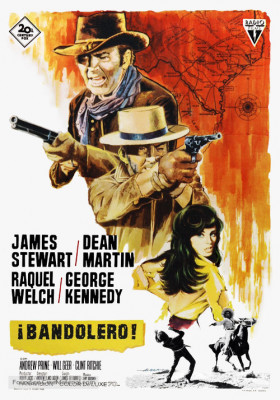 The premise is really a steal from Henry King's excellent The Bravados (1958) with, incredibly enough, Jimmy Stewart essentially playing the same role essayed by Joe De Rita of the Three Stooges in King's film. (The last two-thirds of Bandolero! moves in a different direction, however.)

In the Texas border town of Val Verde, world-weary bandit Dee Bishop (Dean Martin) and his motley gang are arrested following a botched bank robbery, during which the rancher husband of former prostitute Maria (Raquel Welch) is killed. Dee and his followers are sentenced to be hanged.

In what's initially presented as a mystery, Civil War veteran Mace (60-year-old Stewart) assumes the identity of the hangman he's met on the trail. It soon becomes clear Mace knows Dee, and that Mace plans to do something to help Dee, though exactly what and what his relationship is to Dee is initially unclear. (It does generate considerable suspense and interest, however.)

Spoliers Eventually, Mace is revealed as Mace's older brother, and he succeeds in freeing Dee and his gang, though a posse led by Johnson, Deputy Roscoe Bookbinder (Andrew Prine), and at least a dozen others are hot on their trail. Along the way, the gang kidnap Maria. As the gang and their pursuers cross the border into Mexico, they're faced with yet another obstacle, roaming gangs of machete-wielding bandoleros.

While John Wayne spent the 1960s playing up his iconic status and began easing into elegiac Westerns, Stewart appeared lost in the genre without Anthony Mann or John Ford to guide him. Both Shenandoah (1965), an odd quasi-Western with Stewart trying to keep his sons from enlisting during the Civil War, and The Rare Breed (1966), about the introduction of a new breed of cattle into the West, were humdrum family films of little interest. Firecreek (1968) was a nice try, pitting Stewart against real-life friend Henry Fonda, but after 1971 it was TV shows and "guest star" movie roles for the fading if legendary star. Dean Martin, after scoring big as a drunk who makes good helping John Wayne in Rio Bravo (1959) returned to genre only to make hay of it with his fellow Rat Packers. Having already played Wayne's absurdly unlikely brother in The Sons of Katie Elder (1965), it wasn't that much more of a stretch to play Stewart's here. Like that film, their personal story revolves around a mother who died disappointed by her wayward son.

However, in Bandolero!, Mace's quiet desperation to free his wayward brother from the scum he allied himself with has a weight and sense of urgency lacking in Katie Elder.

More than anything, what makes Bandolero! work is Stewart's delightful performance, playing one of several characters in the picture that are somewhat unusual for a Western. Stewart's is partly gentleman bandit, con artist, and wistful older brother. His early scenes are played for laughs, with Stewart amusingly hamming it up masquerading as an over-enthusiastic hangman. (The script carefully sets this up, with Stewart meeting and gaining basic knowledge from the real hangman, played by familiar character actor Guy Raymond.) Though Martin and Stewart don't look anything alike, they have a natural rapport as brothers, particularly in a fine, funny scene where Mace tries to convince Dee to escape with him to Montana. Stewart was unmatched in his ability expressing starry-eyed American Dreams, as Martin keeps interrupting him with concerns about Indians. Once the stakes are raised, however, the film turns a corner into weightier matters of lost opportunities and second chances. The film stops being funny, and ends far differently than its early scenes would suggest.

Hulking George Kennedy, fresh off his Oscar win for Cool Hand Luke is surprisingly shy and low key as a sheriff determined to rescue Maria because he's in love with her, and their scenes have a tender awkwardness that's likewise askew for such films. Welch, meanwhile, seems to have modeled her character after Katy Jurado, not a bad source for inspiration, actually. She's not bad, though the script seems to go out of its way to avoid giving her long pages of accented dialogue. And, unlike her other films of the period, she spends almost the entire picture clothed from head to toe.

The unusually good cast includes Will Geer and Sean McClory as members of the Bishop Gang, and Harry Carey Jr., Don "Red" Barry, and Jock Mahoney as members of the posse. Other genre stalwarts such as Denver Pyle, Dub Taylor, Roy Barcroft and others make the most of their screen time.

Within ten years of when it was made, Westerns like Bandolero! would themselves fade almost to the point of extinction. Near the end of their long runs as leading men, it's heartening to see Martin and Stewart in a late-period Western that isn't tired at all but rather a real surprise, approaching greatness even. Bandolero! is Highly Recommended.