Well, I guess I had to see it to believe it. After reviewing Time-Life's set of Laugh-In's third season, where all 26 episodes were affected by a serious mastering error, I didn't think the problem would have carried over to any of the other sets. In this set of the fourth season with 26 more episodes from the show's 1970-71 season, ONE episode (#22) seems to have come out right but the remaining 25 are still afflicted. I'll talk more about that in the quality section, but first a bit about the show itself: 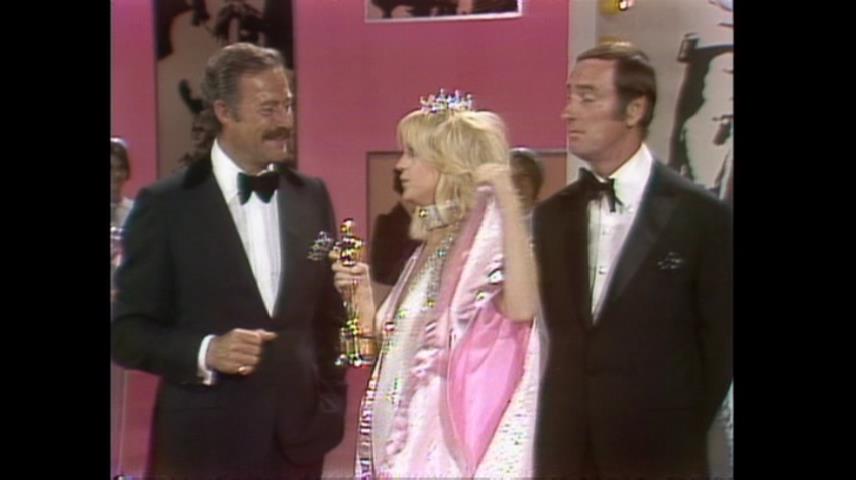 Dan Rowan and Dick Martin still haven't let up by this point, continuing the show's mostly anarchic format that filled an hour-long slot each week when network TV had less than ten minutes of commercial time per hour and the 1960s hadn't yet completely given way visually to the 1970s. A few cast members are gone this season- Goldie Hawn had left the show for a movie career, but she pops into the third show here for a visit hoping to be treated like royalty. A few new faces join the cast as well, including Johnny Brown who isn't afraid to deprecate himself for a laugh. The structure is mostly the same- we still have "Laugh-In Looks at the News", the cocktail party with lots of quick cuts and one-liners ("I know one way to keep America beautiful- just take down all those billboards that say ‘Keep America Beautiful!'"), and "salutes" to various subjects with skits focusing on themes like manual labor and alcohol. They tried to change the ending-credits banter to having the cast stand amongst several celebrity cardboard cutouts, but soon go back to the "joke wall" for the remaining shows. The popular running gags stay on, such as Arte Johnson's creepy "Tyrone" pursuing Ruth Buzzi's "Gladys". A plethora of guest stars appear as well, far too many to list but they include Art Carney, Johnny Carson and Tim Conway (who tries to prove he's a big star by referencing several of his failed TV shows, including the notorious "Turn-On" which I wish someone would put out on disc.)

The highlight of this season is the 7th episode airing the week of Halloween, which turns the show into a "Boo-In" with guest star Orson Welles and appearances from Vincent Price, Rod Serling and the cast wearing costumes. Corny jokes abound ("I'm having trouble burying Dracula- guess you can't keep a good man down") and there are frequent cuts to a joke graveyard (one tombstone reads "Here lies Henny Youngman" with multiple death dates, referring to times he put on a bad show) which must have inspired The Simpsons' Treehouse of Horror episodes later. Unfortunately the flaws in the video mastering are quite apparent here, where several video effects are used which probably looked great originally but not with the botched frame-rate here, which we'll now discuss. 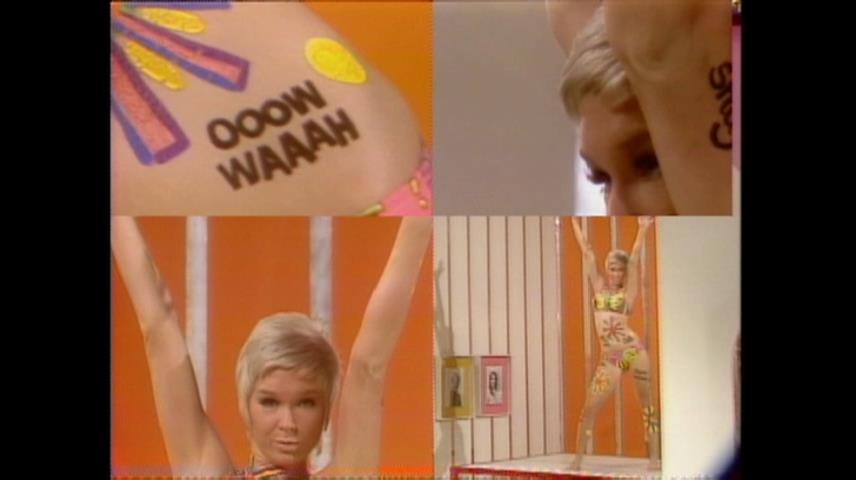 Once again, Time-Life shows the message "Due to the age and nature of the film elements, you may notice occasional flaws in the image and sound quality. Wherever possible, we have sought out and restored the original elements to ensure the best possible quality" at the beginning of each disc, but of course this series was shot on videotape, not film (except for a few brief segments) and the age of the material does not let them off the hook for the obvious digital mastering error that has apparently affected at least the majority of the episodes. Anyone familiar with the look of videotape, which usually looks like a live broadcast no matter how old it is, will immediately see that there is something off with the frame rate. While I do not claim to be an expert in professional video mastering and cannot say for sure exactly what happened, the result is that the picture here appears more like film, with everything moving slightly slower and jerkier. Traditionally any video shown on a computer has looked like this; the plethora of vintage video material on YouTube for example is like this, or any older videotaped sitcom that has appeared on services like Netflix. A reason for this seems to be that one video field is thrown out. Advancements have been made recently that allow for video to display at a high frame rate online (I've been processing all of my YouTube uploads during the past year to take advantage of this) but the vast majority is still at the lower rate. The age of the material has nothing to do with this.

Still, with every episode I kept hoping for proper video the same way Lily Tomlin often hoped for tastefulness. Miraculously, in this set Episode 22 has gotten through unscathed and looks as it should. The previous Laugh-In DVD releases on the Rhino and Guthy-Renker labels were also properly done, although the shows there are missing a few minutes. Oddly, the shows on this set have also been encoded in a 16x9 frame with black side bars, which loses a bit of resolution from if they had been encoded in straight 4x3- but that's the least of the problems here. The elements themselves look to have been in very good shape, aside from a slight bar of video noise at the bottom of the screen, which would have been cropped out on TVs of that era, the picture is very clean. It's a shame that the frame rate was botched so badly.

TV audio was of course mono back then, and quite low fidelity in most markets as it was sent through phone lines, but the sound quality here is pretty good. As usual it's encoded here in 2-channel Dolby Digital and usually stays properly centered with surround decoding applied, but during a few parts in Episode 6 the sound flips out of phase and goes to the surround channels, and all of episodes 15 and 17 sound like they were run through a "stereo processor" that TV stations used on mono sources in the 80s when stereo broadcasting first came about; the effect basically sends the sound to all active speakers and is quite annoying. Both player-generated subtitles and standard analog closed captions are included, which seem to both be worded the same. 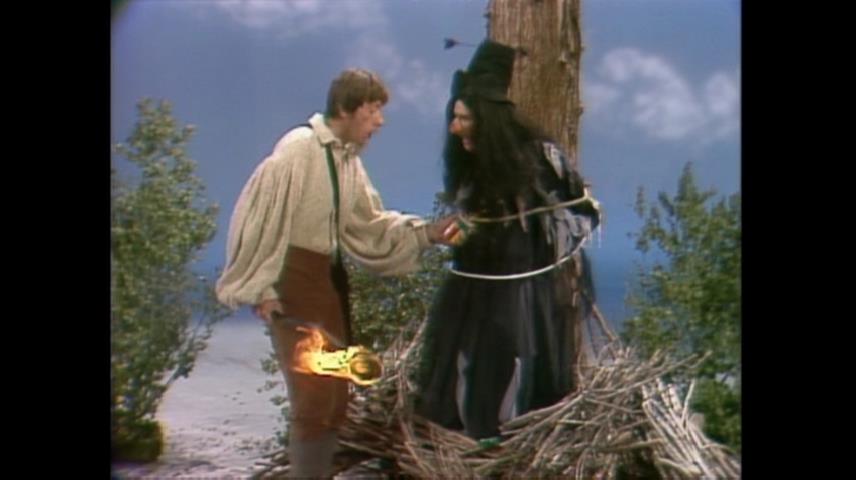 Two recently-shot interviews are included- one is with Lily Tomlin (and shot in HD video at 24 frames per second) who tells a few stories about her time on the show, and another with Arte Johnson which was shot in 4x3 standard definition and is presented here at the proper frame rate unlike the actual shows! His thoughts include the unwritten standards of what is and isn't acceptable in comedy and how those have changed over the years, he remarks that ethnic humor was permissible back then but not today, while general "crude" humor on the other hand has certainly become more mainstream. 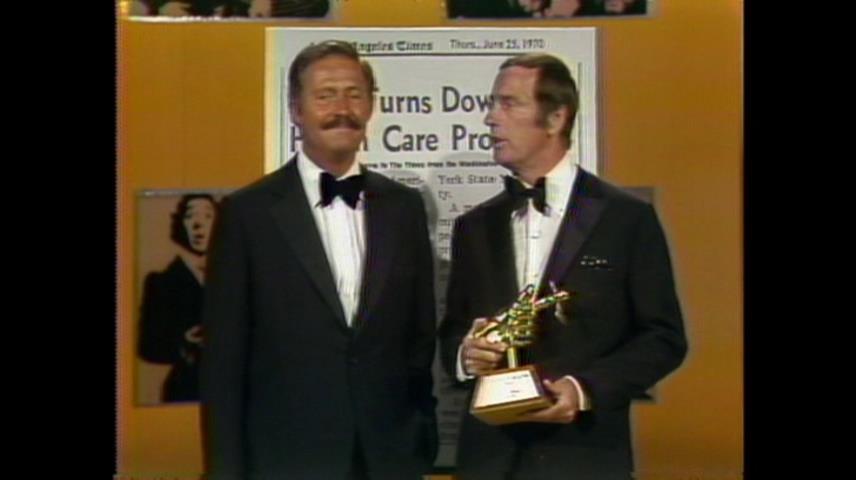 I actually found the content of these shows more enjoyable than the previous season, but I still find the error with the frame rate inexcusable. I would have awarded this set a "Skip It" for that reason, but since they actually managed to get one episode right I'll bump it up to a "Rent It" so you can just watch the 22nd episode and skim through the rest. Time-Life, certainly earning a Flying Fickle Finger of Fate award for this, really should re-do these shows properly while they still have the rights to them.