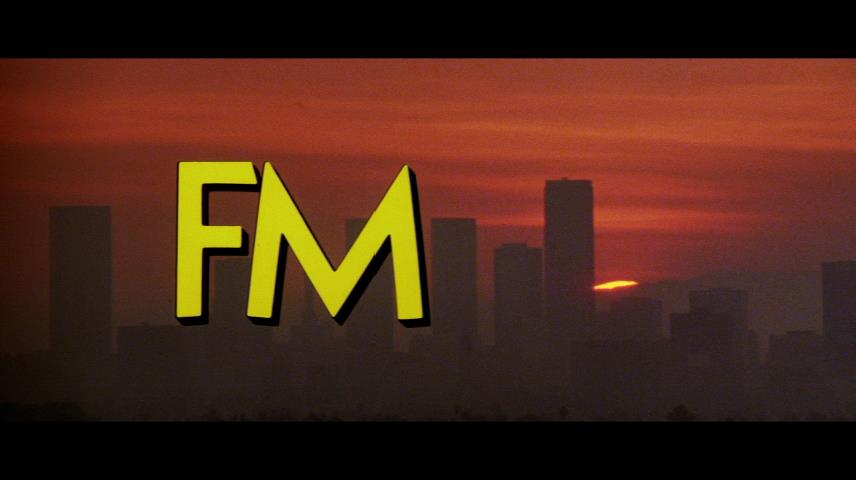 Time to rejoice, for 1978's FM is on Blu-Ray. This was one of those movies whose 2-record soundtrack album might be better known than the movie itself, and the headache of legal clearances has made it hard to find on home video. While it was announced for release on MCA's DiscoVision laserdisc label in that format's infancy, it never appeared on any home format until late 1991 (on VHS panned and scanned from its 2.35 ratio, but also on laserdisc in letterbox format- one release that convinced me to finally buy into that format soon afterwards.) It later showed up on DVD courtesy of Anchor Bay, but a large number of those discs rotted and no longer play- as I discovered when checking a friend's copy. The movie did however appear a few times on TV, showing up in the 80s in the late-night slots where I first discovered it. While I wasn't a fan of the music featured, it was still of interest being that the radio business was something I wanted to work in later- although with the way it is now, I'm glad that I didn't for the long term. (I did have a very brief stint at one station playing pre-selected music and commercials overnight with no talking, and was replaced by one of the first computer hard-drive based automation systems.)

FM celebrates what's looked back upon as "free form rock" stations, when more mainstream pop music was still mainly on AM and FM catered to a more sophisticated audience. The fictional station here is called QSKY in Los Angeles, headed by station manager Jeff Dugan (Michael Brandon) with a motley band of music-loving disc jockeys including smooth-talking overnight man Prince of Darkness (Cleavon Little), popular but burned-out Eric Swan (Martin Mull) and "Mother" (Eileen Brennan) who's older than everyone else and considered the veteran. These people don't just play records on the air, but engage with the audience and "create art" as Swan puts it, setting a sacred atmosphere in the studio that they hope will carry over to the listeners. The best actual radio stations had on-air talent that was almost as appealing as the music, and that is now the largest element missing from the medium today as many stations have gone completely automated and some actually record the on-air banter ahead of time. At least when the movie begins, QSKY is owned by a big corporation run by people more interested in money than music, but it seems the station personnel are still mostly left alone to do things as they see fit. (Of course back then the most any company could own in one city was one FM and one AM station- since the rules were changed in 1996, companies like ClearChannel started buying up multiple stations in several markets and now run as many as six from one building.) 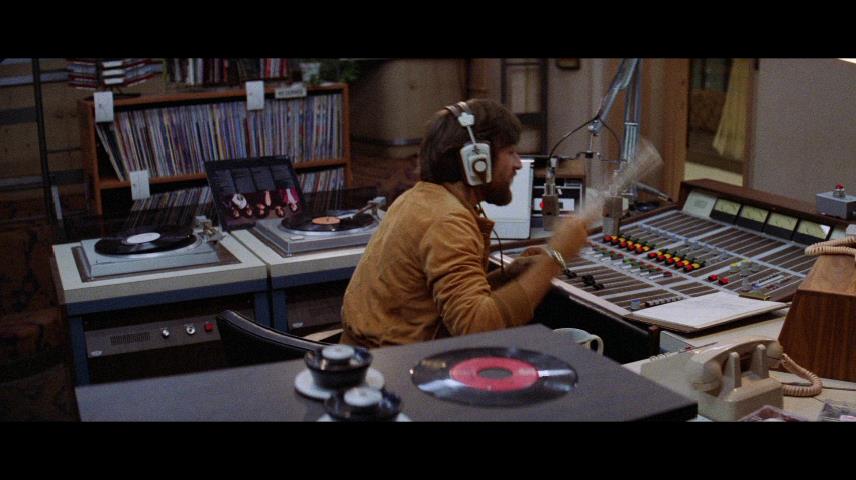 The movie's conflict begins when the owners send over Regis Lamar (Tom Tarpey) to focus a bit more on advertising sales and make sure the station is as profitable as it can be- it's already the top-rated in the market but hasn't been pulling in as much money as it could. Lamar is all-business and "can take it or leave it" when it comes to music- he's more interested in the demographics the station's music attracts and what advertisers can reach them. He soon lands a deal with the US Army to run a big ad campaign- but Dugan auditions the commercials and finds them annoying and insulting. He's not opposed to promoting the Army on the air, but simply hates how these commercials sound- he suggests having the station's personalities plug recruitment on the air themselves, but the guys with the money want the spots aired. While I'm always for a good "people vs. the establishment" story, this has always seemed like kind of a weak problem- after all, the only money the station gets is from airing commercials. Without them the station wouldn't even exist. Forcing changes in the music itself would have been a much bigger problem in my opinion, and that's what's killed radio in the real world.

One simply has to overlook that criticism to enjoy FM, and aside from that it's a lot of fun. The fictional station still looks like a much better place to work than anything that exists now, and those who are into radio and music will enjoy looking over the background details such as equipment, records and the things that wallpaper the entire building like concert posters, trade charts and the occasional humorous clipping. While this isn't a musical, the music was the movie's biggest selling point and we get a number of full concert song performances first from Jimmy Buffet and later Linda Ronstadt. The editors aren't afraid to let the complete songs play out with any concern of their slowing down the narrative. (Linda Ronstadt's appearance is another implausible element, as her concert is promoted by a rival station but Dugan and company conspire to broadcast it live on QSKY. Even in the 70s it was extremely rare to hear a complete concert by a big-name artist on the radio much less live, as that would eat into ticket sales.) The scenes at the station feature wall-to-wall music in the background as well to justify including those songs on the soundtrack album- and it's all mainstream rock including a title song by Steely Dan (no static at all!) as well as radio staples like Steve Miller's "Fly Like an Eagle"- a common criticism of this movie is that a real free-form station would have been playing deeper cuts and more obscure artists, but this seems to be what the characters here like. Aside from the whole issue with commercials it looked like a great place to work when I first saw the movie, and Martin Mull provides the best joke for recovering from a long period of silence going out, known in the industry as "dead air"- "You've just been listening to Marcel Marceau's new hit single, now for something a little more traditional. This movie makes for a great time-travel piece now, even giving the Tower Records Sunset Strip store a supporting role as the station broadcasts from there during an instore appearance from REO Speedwagon. Just the sight of racks filled with LPs, and the wall of 45s behind the counter are enough to make use of extensive freeze-framing. I almost wished I could walk into the picture and explore the entire store as it was there. At the risk of sounding old and jaded, there are plenty of reminders of things that were far better back then than now. While it's true one can find a much wider variety of music online now than they ever could on the radio, most of that is coming from a server rather than a live DJ and we've lost the communal experience that comes from that. I imagine if this story were extended to the present day, QSKY would have eventually been taken over by a bigger media conglomerate and had its sound severely compromised with little to no personality remaining- that is if it weren't bought out by the big Christian pop music network that has been swallowing up a number of stations recently and running the same nationwide feed on all of them, with zero local presence. 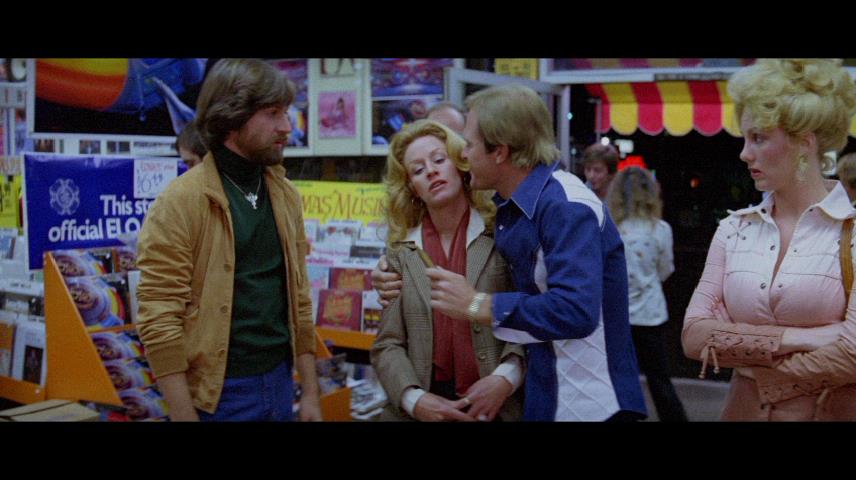 Arrow credits Universal with the actual film transfer, which is a revelation after years of watching the low-resolution laserdisc. Details abound that were only hinted at before- in many shots you can actually read the spines of the album covers at the station and read the various items posted and written on the station walls. Of course I've gotten trained so much to recognize common album covers that I can spot and ID most of them from a distance, as I often can with movie posters and video covers. Another detail that becomes more obvious here is that the scenes outside the station building were shot on Universal City's lot, not on location. Colors appear a bit faded but this seems to be part of the movie's intended look, never appearing too slick.

The main audio track is 2-channel PCM and recreates the matrix-surround encoded Dolby Stereo track, a relatively new thing at the time (many theaters weren't even equipped for it, running the sound in mono instead.) The quality is about the same as it was on the laserdisc, fidelity just a bit dated and the music having a tendency to echo in the surround channels. There's also a 5.1 track in DTS Master Audio, which sounds like a more recent mix- the surround use isn't as heavy here. Hearing-impaired subtitles are included which include most of the sound lyrics, and get those more accurate than the captions on the laserdisc did. 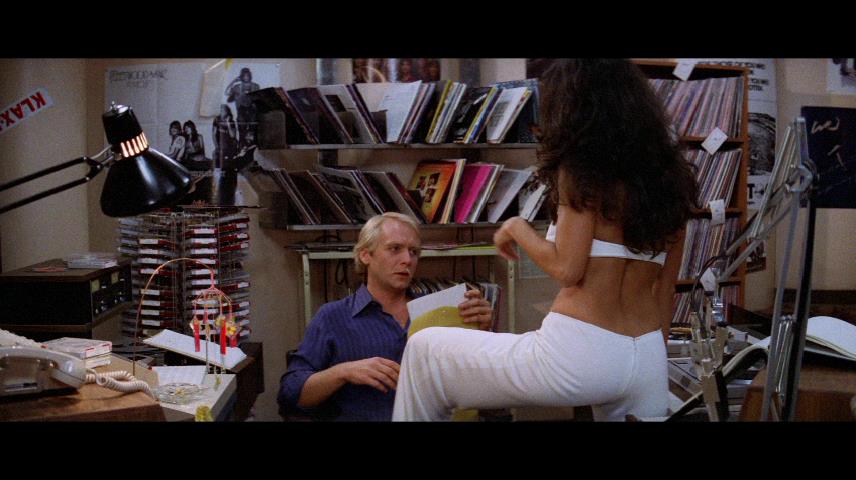 The most unique extra here is an isolated music and effects track, which features not just the music but also the sound effects and background sounds. Scenes at the station controls let you hear the foleyed sounds of switches flipping and sometimes papers being tossed aside. Although the back cover lists this as being in "1.0" format it's actually encoded in 2-channel, but the track is still only in mono which might have made the music rights holders a bit more comfortable. If you want to hear clean complete versions of the songs here, buy the album which is still in print on CD.

Arrow's usual lengthy conversations are present here- the first is from Michael Brandon who in real life doesn't sound much like his DJ character- he talks about this and other movies he's been in as well as his involvement in "The Bionic Woman" TV series which starred his wife Lindsay Wagner. The movie's writer Ezra Sacks appears (he also wrote the 1980s Goldie Hawn sports comedy Wildcats) and talks about some of his inspirations when he observed the business working as a film critic for one station. "The Spirit of Radio" is led by critic and writer Glenn Kenny who goes through the movie examining the songs that were most prominently featured. There's also a number of production stills, domestic and foreign movie posters and ads, and most interestingly shots of the movie's soundtrack album in all its formats including 8-track (my favorite) and also a few "record rip-offs" that the movie inspired from labels like Pickwick and Springboard, which typically sold albums of popular songs re-recorded by their studio musicians and singers- the front covers of these have the words "Not the original soundtrack" in small letters, as few would have actually bought them knowing that. I usually pick these types of albums up when I find them as they are good for a laugh. Finally the movie's theatrical trailer is included, though upconverted from a standard-def source. 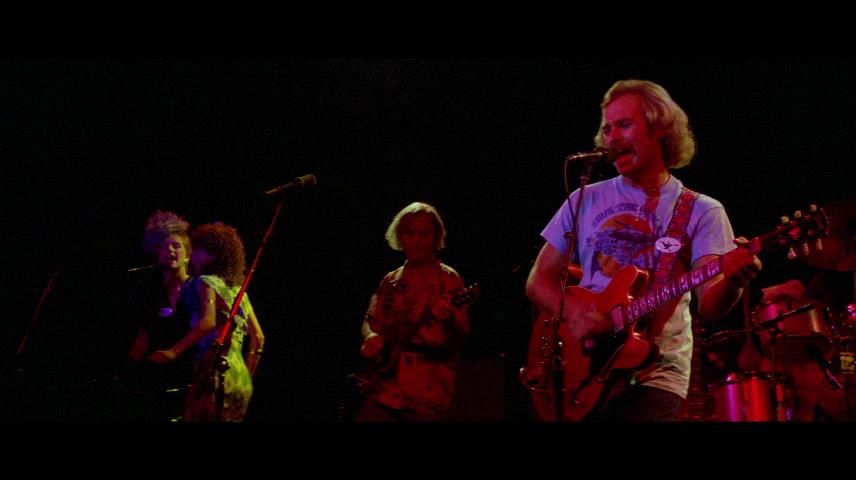 It's hard to believe that FM is over 40 years old now; it already looked quite dated in the 80s when I first saw it but it's now a great time capsule of the late 70s, excluding disco which rock fans usually hated with a passion. The plot is a bit silly but that's part of its charm, and it's never looked better than it does here. Buy a copy before it gets shelved again for another decade or so. 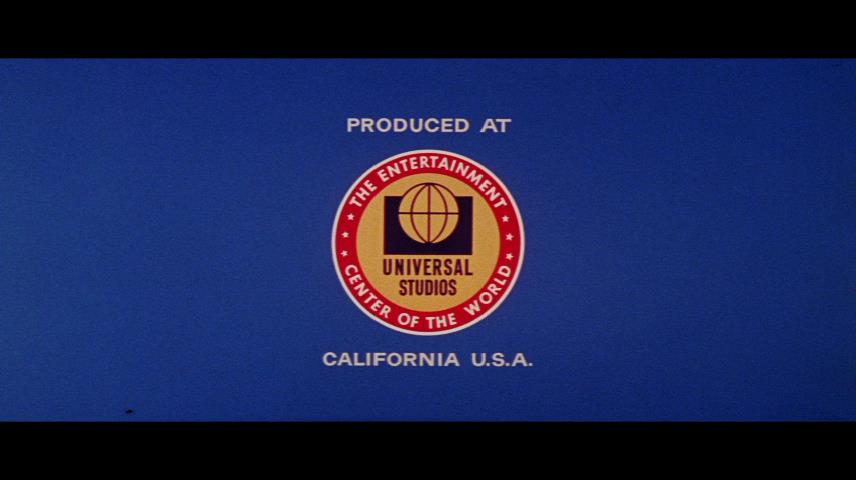