Paramount // Unrated // June 4, 2019
List Price: $84.98 [Buy now and save at Amazon]
Review by Stuart Galbraith IV | posted July 15, 2019 | E-mail the Author
Gather ‘round, kiddos, for this review of The Brady-est Brady Bunch TV & Movie Collection will, as never before, attempt to make sense of this unkillable piece of pop culture iconography. Your humble reviewer was in the thick of things when The Brady Bunch, the 1969-74 family sitcom, staked its claim onto the American consciousness, and can offer a bit perspective those generations, just before and since, can't quite reconcile.

But before we do that, let's first point out that this compact if unruly boxed DVD set, with a total running time of around 75 hours (!) of material includes with one notable exception just about everything Brady-related one might possibly ever want: the original series; The Brady Kids animated spin-off; The Brady Girls Get Married TV movie and its short-lived sitcom follow-up, The Brady Brides; A Very Brady Christmas, a later TV reunion film and its series follow-up, The Bradys; the two Brady Bunch theatrical features satirizing the original show, as well as The Brady Bunch in the White House, a third satire so bad that it went straight to TV; and Growing Up Brady, a sentimental TV movie adaptation of co-star Barry Williams's making-of/autobiography.

What's missing, of course, is The Brady Bunch Hour, the awesomely bad musical variety series guaranteed to turn one's brain into cottage cheese, a series so mind-bogglingly weird it must be seen to be believed. That short-lived series, however, was produced by Sid & Marty Krofft Productions, not by Paramount Television. Theoretically it could have licensed it from the former, but that's okay. 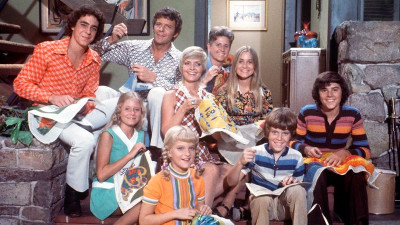 Some personal background: Like most kids growing up in the early 1970s, I didn't watch The Brady Bunch during its primetime network run. Not many did. It ranked near the bottom of the ratings during its first and final seasons, and even at its peak never broke into the Top 30, let alone the Top 10. I think I caught all or parts of an episode twice.

However, after its five-season run ended, The Brady Bunch immediately went into syndication. Boy howdy did it go into syndication. In the Detroit TV market where I lived, The Brady Bunch at its peak aired at least 15 times per week, twice back-to-back in the afternoons, and then again at 7:00pm on WKBD Channel 50. (I think it also aired once or twice over the weekend.) If you were past kindergarten age, back then your only choices most weekdays were Channel 50 and WXON, Channel 20, the only local stations airing kid-friendly programming in the late afternoon after school. Like it or not, an entire generation of American children were pretty much stuck watching The Brady Bunch.

And because they were run and rerun into the ground, their very unavoidability seared our collective consciousnesses with "Oh! My nose!" Bobby's infatuation with Jesse James, Cousin Oliver, "pork chops and applesauce," "Marcia! Marcia! Marcia's" big date with Davey Jones, Greg wiping out on his surfboard in Hawaii, etc., etc. These weren't great moments of television comedy-drama. Rather, an entire generation of kids memorized them alongside their New Math and the Pledge of Allegiance.

But was The Brady Bunch any good? Writers of the earlier Leave It to Beaver had a much better grasp of the concerns of ordinary kids, their relationships to one another, their parents, and the outside world. Brady Bunch, the creation of producer Sherwood Schwartz, was more slapstick- and wisecrack-oriented. The Brady Bunch might not have been as surreally unreal as Gilligan's Island, Schwartz's other contribution to American pop culture, but The Brady Bunch sure had its moments. (In fairness, The Brady Bunch was, clearly, "inspired" by the spring 1968 movie Yours, Mine, and Ours, a similarly innocuous comedy starring Henry Fonda and Lucille Ball as widowed single parents raising ten and eight children, respectively, who decide to get married. That film asked us to believe the nearly 60-year-old Lucy would give birth to yet another baby, so the lack of credibility had, at least, some precedent.)

Like that movie, The Brady Bunch started out in its first season overdosing on sickly-sweet sentimentality in the worst sense but, as the kids got a bit older (if not exactly hipper), the series took on a life of its own, and became harmlessly amusing, if rarely genuinely good.

And, yet, for my generation the show is almost like a fictitious, American pop culture counterpart to Michael Apted's nearly concurrent "Up" documentary series, seven-year-interval films following British children of the late-1950s. Apted began interviewing them in 1964 (for Seven Up), with the most recent installment, 64 Up, airing just last month. Similarly, the Bunch has never really gone away. Though their last in-character appearance was nearly 30 years ago, the six former Brady Kids reunited yet again for the HGTV series A Very Brady Renovation, scheduled to premiere this fall.

In this sense, all that is Brady is, at least for this reviewer, rather like attending a high school reunion. I may not hold particularly fond memories of that part of my life, but it would be kind of neat to visit the old school again, reunite with a few of surviving teachers and alarmingly dwindling number of former classmates, if only for a few hours. Familiarity breeds affection, and even if at its most banal the sets, the hairstyles, and the hijinks of those crazy kids and their goofy maid are nothing if not warmly familiar. I hadn't seen an episode of the original show since, probably, the late-1970s, but the memories surely came flooding back, and it's interesting to see all the various permutations the original concept took in the years since.

The Brady Kids (1972-73), a Filmation animated series for Saturday mornings featuring all the original kids (and their accompanying voices) but no adults; and the ill-fated variety show notwithstanding, combined with the syndication success of the original series airing nonstop throughout the decade kept the Brady brand alive. After Schwartz's reunion film Rescue from Gilligan's Island (1978) shocked the industry with a 52% Nielsen Rating (the highest rated TV-movie of all-time, in fact), a Brady Bunch reunion of their own, in spite of the disastrous variety series, became inevitable.

The Brady Girls Get Married (1981) is perhaps unique in the history of television. The ninety-minute reunion film featured the entire original cast (for the only time after the original series ended). It was shot on film and goes through the usual paces. However, after Marcia (Maureen McCormick) and Jan (Eve Plumb) actually get married and the show seems to be reaching its obvious conclusion, everything shifts in the last half-hour to the siblings' anticlimactic antics as newly marrieds, on a set that, suspiciously, looks like a standard three-camera sitcom family room. (The first hour of the show is a one-camera, 35mm job, like the original series.) My guess is that the show was originally conceived as a one-hour special, but then Schwartz talked the network into letting him add another 25 minutes that would serve as a backdoor pilot. Sure enough, the series that followed, The Brady Brides, was exactly that, a typical sitcom filmed before a studio audience. It lasted only seven episodes.

What under normal circumstances would have signaled the ignominious end of any other franchise instead proved but a brief interruption. Seven years later came A Very Brady Christmas, another TV-movie reunion film, arguably the best of the Bunch, despite the absent of original Cindy Brady (Susan Olsen) and a different actor in the part of Sam the butcher, the husband of former maid Alice (Ann B. Davis). That TV-film enjoyed a 39 Neilsen share, the highest-rated TV-movie of the season, spawning another short-lived series The Bradys, now intended as a one-camera comedy-drama in an hour format, with Olsen back but now Maureen McCormick absent. It lasted six episodes.

But The Brady Bunch wasn't dead yet. The Brady Bunch Movie (and its first sequel) were lightweight but mildly funny satires, with new actors playing the Brady family, whose stuck-in-time ‘70s sitcom sensibilities are at odds with modern (the mid-1990s) times. It works best acknowledging the audience's familiarity (to put it mildly) with the Brady Bunch universe, a rat-a-tat machine gun firing of gags based on those unforgettable (try as we might) moments in the original series.

Growing Up Brady is a predictable but warmly nostalgic adaptation of Barry Williams's (Greg Brady) autobiography, following the production of the original series, focusing on Barry's infatuation with Maureen McCormick, star Robert Reed's (Mike Brady) closeted homosexuality, and the show's rise and fall. The actors playing the original cast are mostly spot-on, and the recreations of the original sets and costumes impressive.

The packaging for The Brady-est Brady Bunch TV & Movie Collection packs 31 DVDs into one big box about the width of four standard DVD cases. The inner sleeve breaks everything down disc-by-disc with show and episode titles, but it's basically impossible to read without sliding the paper sleeve completely out of the box. The original series occupies the first 20 discs, with The Brady Kids on the next four, The Bradys on two discs after that, and The Brady Brides (including the reunion film in its original, TV-movie format) on one disc after that, and with everything else given its own DVD, seemingly all reissues from earlier DVDs. The big problem here is that in order to fit everything into so compact a package the DVDs are stacked up to four to a spindle, and trying to find a specific episode or even a specific program takes much undue effort. The video transfers vary, but the original series looks great; some of the reunion shows, especially The Brady Brides much less so, but then again, the later films were shot and/or finished on analog video tape, so there are limitations and they are perfectly watchable. Most everything except the 1990s satire features have English audio and subtitles only, while the first two comedy features add French audio as an option. No Extra Features per se, but then again, the more obscure, short-lived follow-up shows already feel like supplements to the original series.

The Brady Bunch and all its reunion shows, series, and spoofs, with the exception of The Brady Bunch Hour are all here. It's not great American television but it may be the most emblematic of TVs kids of the 1970s watched after coming home from school. For reasons of nostalgia it's worth a look, and for that generation of viewers Recommended.