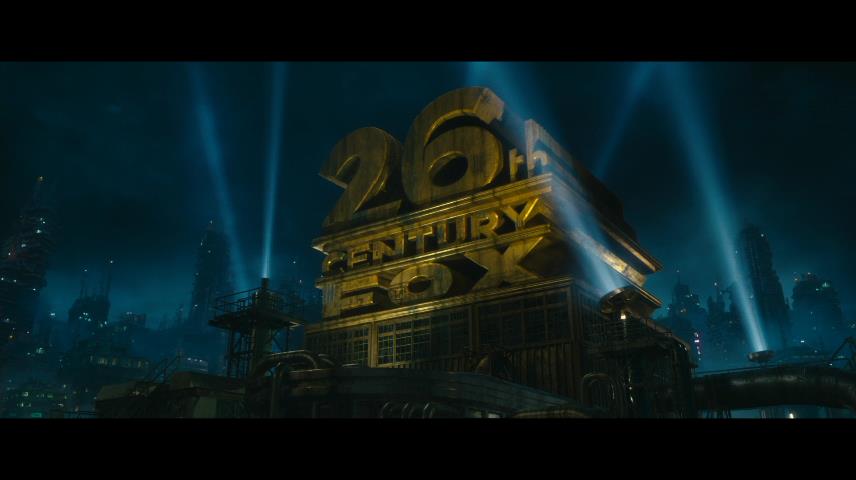 James Cameron was considering two projects to take on- Avatar or a movie based on the Japanese manga series "Battle Angel Alita". It was a tough call but he went with Avatar and then decided to spend the foreseeable future making sequels to it. Director Robert Rodriguez was disappointed as he had wanted to see how he would have brought "Alita" to the screen, and after a conversation Rodriguez ended up making the movie himself based on Cameron's script.

The year is 2563, 300 years after "The Fall", the apocalyptic event that destroys most of the world which is a central happening in many of these stories. Mankind rebuilds in a place called Iron City, which sits on earth below the floating city of Zalem where the elite live and is off-limits to the lower-class below. These aren't just regular humans though, many of them are cyborgs with as little as one limb or as much as their entire body being mechanical. A cool thing is that many of their parts are interchangeable, so for example if a cyborg gets most of its body blown apart in a fight their human portion can be transplanted into a new one. A dismembered human can also be rebuilt in a similar way. Dr. Ido (Christoph Waltz) makes his living performing these operations and doing general repairs for the cyborgs. Zalem tosses its garbage down into Iron City, and Ido regularly rummages through it- one day finding the upper torso of a young girl cyborg. He rebuilds her and becomes a sort of Gepetto to her. He names her Alita, after his own daughter who was killed by intruders earlier. Rosa Salazar plays Alita, but it's a pretty unconventional performance as we don't really see her in this movie. Alita appears pretty convincing, but there's just a few things about her that show she isn't real, mainly her oversized eyes. Salazar performed her role in a motion-capture suit and was then digitally replaced, and the effect is so seamless you would hardly know.

The movie plays mainly as an origin story, as there is a lot going on but to those unfamiliar with the original story it's a bit chaotic. Ido is first very protective of Alita, but she sneaks out anyways and ends up saving him from trouble with the local bad guys. When she's suddenly forced to fight, it turns out she can kick some serious ass- and this triggers memories of what she was doing before ending up in the scrapyard. It seems she used to be a great fighter. When she learns about the city's Hunter-Warriors (bounty hunters essentially) she wants to become one of them but Ido strictly tells her no way. Alita also learns of the popular sport Motorball, which is played on roller skates (yes, this has been done before, but it still looks pretty cool onscreen.) She meets Hugo (Keean Johnson) who is into the sport and aspires to one day move up to Zalem, doing so by being part of a group that harvests parts from cyborgs in often unethical ways. He keeps that detail hidden and the two of them bond before the real trouble starts. 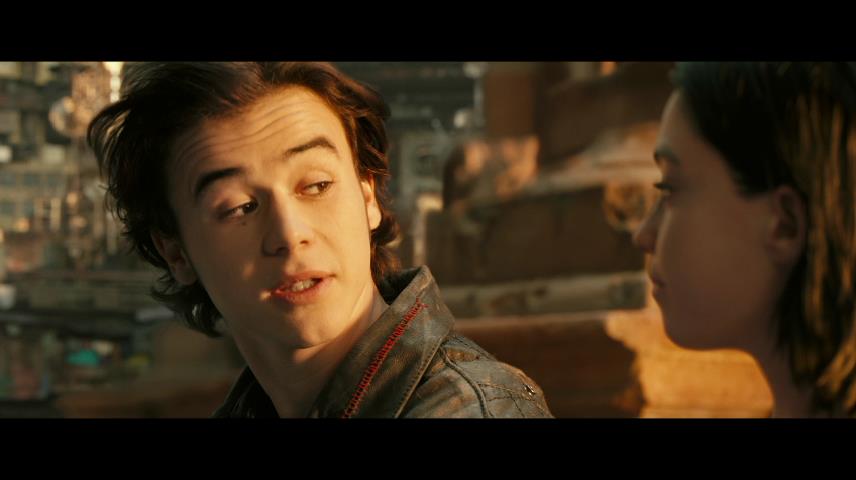 There's a gang of bad cyborgs led by the hulking Grewishka, played by Jackie Earle Haley who's unrecognizable here- though all you really see of him is his head. The rest of him is an animated mass of machinery, which like most of the effects is pretty convincing. He's an enemy of Ido and vows to destroy Alita once he learns of her existence. Another bad guy is the human Vector (Mahershala Ali) who runs much of the Motorball tournaments and is behind the parts-harvesting- he also wants Alita destroyed. Again, there aren't many resolutions to these conflicts, instead it feels like an introduction to the characters and settings that could be further explored in further movies. A number of graphic novels have already been printed so there should be plenty to draw from if that happens. Rodriguez seems to have a knack for seamlessly blending CG characters into live action- I first noticed this in Spy Kids which looked cartoony but still quite convincing. Here that cartoony look is lost in favor of more realistic effects. 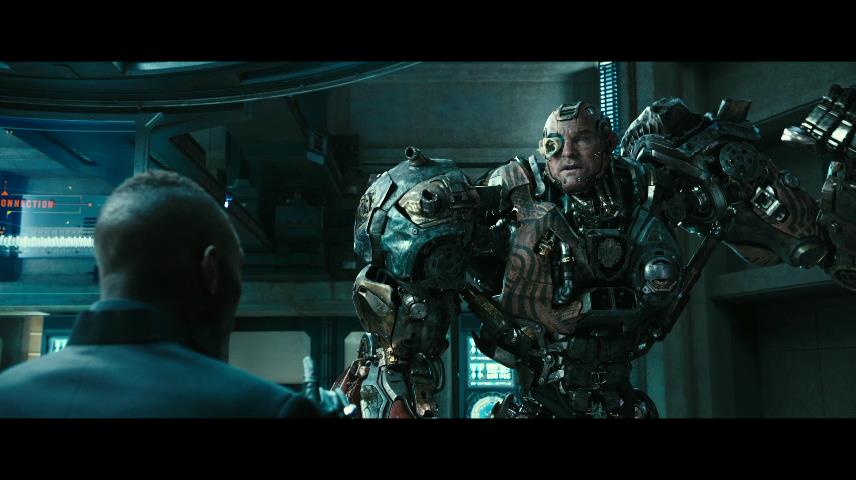 I was quite excited for this movie because it was shot in true, 2-camera 3D, not post-converted like most other 3D titles. However this edition only presents the movie in flat 2D. A 3D Blu-Ray is available separately along with a 4K UHD disc (which of course doesn't support 3D). I ended up buying that edition and first watched the movie in 3D, but received the 2D edition for review so will focus on that. I will say that the 3D is very immersive without being gimmicky- watching the 2D version it isn't obvious that you're missing anything, but if you've seen both it still feels like a different movie. I usually liken watching a 3D movie in 2D to watching a color movie in black and white, and that's pretty much the effect here. I did find that the 3D basically forced me to draw my attention to certain parts of the picture, while the 2D version allowed me to study the backgrounds more actively- of course I was also already familiar with the movie at that point and looking for some of the smaller details. Overall the 2D Blu-Ray is watchable, but loses a bit without the depth.

All versions of the movie on disc are presented in the 2.35 ratio. In IMAX theaters, some scenes were shot in an "expanded" ratio which were supposed to appear "taller" on those screens with the rest of it letterboxed. I find that trend pretty silly, as the purpose of widescreen is to appear WIDER than normal, and a proper theater screen is designed with that ratio. I've sort of given IMAX theaters a pass showing 2.35 movies letterboxed since they weren't even designed to show feature films initially, but meant for documentaries shot on IMAX film and intended only to be seen on their screens, but have to shake my head at how they've been promoting movies like this as having "more" image. It seems they want to promote taller as the new wider. Meanwhile many regular theaters built recently have had screens with native 1.85 ratios, some without even any adjustable masking which means 2.35 movies are shown letterboxed, and I find that unacceptable. I don't know why they couldn't just show this movie everywhere with the "expanded" ratio, even if it meant appearing smaller on screens with the proper ratio (with side masking covering the left and right portions). Some movies shot that way have been presented as such on disc, but not in this case.

Overall detail on the Blu-Ray is quite good, appearing just a bit soft on my screen which the 4k disc may improve (I have not viewed that yet.) This edition also includes a regular DVD, and sampling that I found the movie actually appears like a slightly older film with its limited resolution. (I don't know why regular DVDs are even still included with many releases nowadays, but as long as they are I will give them a look.)

Audio on the Blu-Ray is 7.1 DTS Master Audio. An Atmos mix was done for this movie, but that is only present on the 4K UHD disc. The sound here is still pretty impressive however, with active surrounds throughout particularly during the Motorball scenes. (The DVD of course is limited to 5.1 Dolby Digital and sounds far better than the picture on that disc looks.) A separate 2-channel track is included on both discs, presumably so those without real sound systems can use that and the main track didn't need to be dumbed down to accommodate them. There's also a descriptive audio track and French and Spanish dubs, along with English hearing-impaired and standard French and Spanish subtitles. The DVD also includes old-fashioned closed captions. Annoyingly the Audio and Subtitle buttons are locked out on both discs, and the Blu-Ray's pop-up menu doesn't even let you change them during playback; you must go back to the main menu to do so. 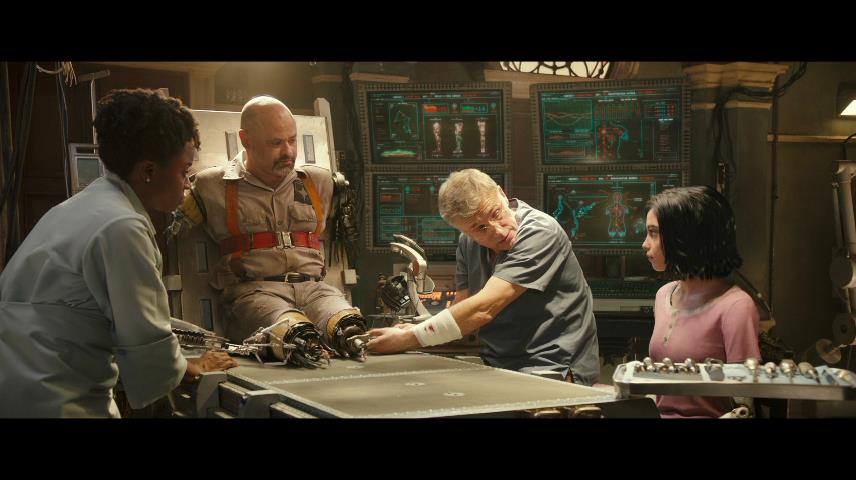 The Blu-Ray includes some substantial extras, worthy of a laserdisc edition in the old days. There are a few "motion comics" with narration and limited CG animation which explain the story and its world a bit more. "From Manga to Screen" features creator Yukito Kishiro describing his story and his impressions of the movie- it's neat to see him step onto the constructed Iron City set seeing his world brought to life. We also learn about how James Cameron handed the movie off to Robert Rodriguez after finding he wouldn't have time to do it himself. "Evolution of Alita" features Rosa Salazar and how her performance on set was transformed into the lifelike animated character that replaces her. She says she was already a huge fan of the character and hopes to play her in more films to come. There's a short obligatory feature on the Motorball game, and Rodriguez includes a "10-Minute Cooking School" (actually just about 5 minutes here), as he's done on the discs for his previous movies, this time showing us how to make chocolate candy inspired by the movie's design. A 26-minute Q&A with Cameron, Rodriguez and the main cast has them answering some selected questions from fans; this was shown with the movie's premier in several markets. An Art Compilation shows some earlier concept paintings with story narration, and a Scene Deconstruction feature lets you view four segments from the movie in different stages including the original footage with no effects. It lets you switch views with the colored buttons or a pop-up menu, but the good old Angle button also works if your remote still has that. The DVD includes only the motion comics and "From Manga to Screen" features. 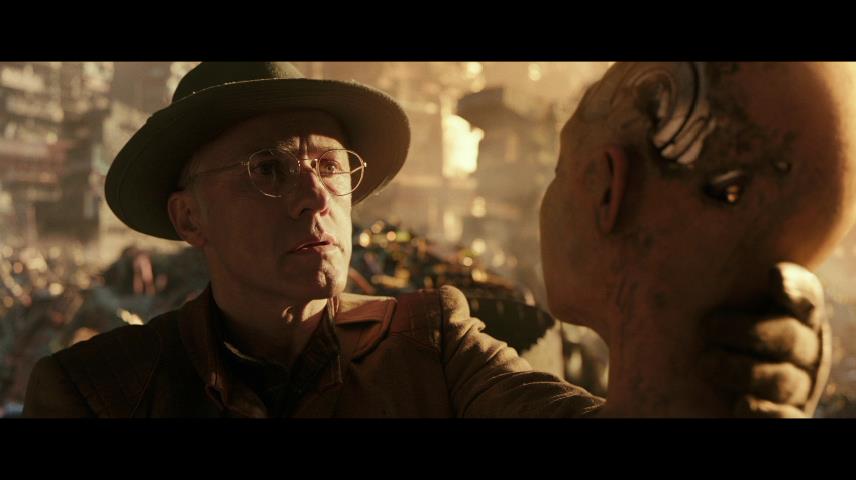 Though a bit scatterbrained in its narrative and leaving you wanting more, Alita: Battle Angel is a lot of fun with some impressive visual effects, and the extras are refreshingly in-depth rather than the puff pieces that have been common recently. Overall the movie is Recommended but I strongly advise those so equipped to buy and view the 3D edition (and kudos to everyone responsible for its release and wide availability, as I've been forced to import most of the recent 3D titles), as that's clearly how it's meant to be seen.