VCI // Unrated // August 27, 2019 // Region 0
List Price: $18.19 [Buy now and save at Amazon]
Review by Stuart Galbraith IV | posted September 5, 2019 | E-mail the Author
One of the more obscure serials, The Vanishing Shadow (1934) was a Universal production. As fans of such serials - typically 12-part theatrical shorts running two reels (16-20 minutes) apiece - know very well, the vast majority of sound era chapter-plays were made by three companies: Universal, Columbia, and Republic. Though the smallest of the three, Republic is generally considered to have made the best ones, while Universal is said to have made the weakest. That's true to a point, but the serial form went steadily downhill industry-wide after about 1945, until companies stopped making them altogether in 1956. The later ones were much less imaginative, relying on genre tropes and available stock footage with equal measure.

Many Republic titles have been issued through the years, on tape, DVD, and even Blu-ray, but officially-licensed Universal titles have mostly been limited to that company's three "Flash Gordon" serials, whose rights now reside with Hearst Entertainment.

So it's nice to see something like The Vanishing Shadow, a title I'd only vaguely heard of until recently. As it was made during a period when serials were just entering a kind of golden era, it's quite enjoyable with lots of special effects and not entirely predictable action. VCI's new Blu-ray, remastered in 2K from an original fine-grain, is far from perfect, though on my big screen I thought it looked pretty good overall, especially considering its obscurity. 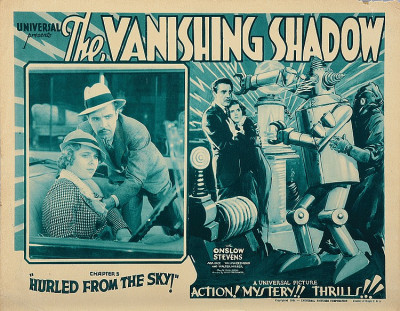 Inventor Stanley Stanfield (Onslow Stevens) approaches reclusive scientist Carl Van Dorn (James Durkin) with blueprints for an extraordinary vanishing ray, unaware that Van Dorn has been working along similar lines, creating a belt that renders the wearer invisible - though his shadow remains. Stanfield's blueprints provide the answer Van Dorn needs to make the prototype belt functional, and they decide to team up.

Stanfield hopes to use the invention to bring to justice ruthless businessman Ward Barnett (Walter Miller), whom Stanfield blames for his father's untimely death. Ironically, around this time Stanfield acquires a new girlfriend, Gloria Grant (Ada Ince), who, in fact, is Barnett's estranged daughter.

Republic recycled its stock footage endlessly, especially the spectacular miniature effects of Howard and Theodore Lydecker. After a while, these scenes in their later serials become so familiar one could predict the entire course of each chapter, just by the cars being driven, the building our heroes were held captive in, or bridge they were approaching. Unfamiliarity is a big advantage with The Vanishing Shadow; though Kenneth Strickfaden's electrical gizmos fill Van Dorn's two laboratories, and some of Van Dorn's original gadgets would later turn up in the Flash Gordon serials, the serial itself feels a lot fresher than most, though it's not particularly better.

Onslow Stevens was a busy character actor, working steadily into the early 1960s, but he's mainly remembered for a single role, playing the Jekyll-Hyde type mad scientist character in House of Dracula (1945), the last of Universal's straight-faced monster romps. His much more youthful good looks and sonorous voice fit the character well. Ada Ince, the wife of William Thomas Ince (son of the silent era mogul), isn't much of an actress, but her babyface innocence suits the part. More interesting is the presence of James Durkin, a former Broadway actor-director whose film career dates back to least 1913, though mostly as a director until the early-talkie period, when he returned to acting. Despite appearing in a couple of major films like Scarface (1932) most of these parts were uncredited. The Vanishing Shadow was apparently his last role, released as it was posthumously. As a genius jack-of-all-trades scientist, his reassuring presence is a bit like Frank Shannon's later Dr. Zarkov in the Flash Gordon films.

For Laurel & Hardy fans, The Vanishing Shadow's biggest treat will be the actor playing the main henchman, Richard Cramer. With his menacing, perpetual scowl, Cramer specialized playing particularly sadistic villains, including several starring Laurel and Hardy, but none more memorable than escaped murderer Nick Grainger in Saps at Sea (1940), who torments The Boys mercilessly.

The special effects and stunt work are impressive. In one early chapter, a road crew has dynamited a hillside adjacent to the road Stanfield and Gloria are racing down by car, trying to elude Cramer and his gang. (The foreman is played by Lee J. Cobb, making his screen debut.) The explosion sends rocks and sediment flying, including on top of Onslow Stevens and Ada Ince, not their stunt doubles. It really looks like they barely escaped serious injury.

The invisibility effects are more limited than those found in, say, The Invisible Man (1933), also Universal, but they're quite ambitious for a serial, and have a unique look, possibly achieved by some combination of optical effects and an on-set beam-splitter. There's even a bit of stop-motion and/or time-lapse photography, showing the effect of Van Dorn's "death ray" on a houseplant, which withers in an instant.

In its original 1.37:1 black-and-white form, The Vanishing Shadow looks sharp and, considering the very existence of decent film elements was in doubt for many years, relatively free of damage. My only complaint is that the image is presented way too light, with all the blacks washed into various shades of gray, though VCI seems to have finally eliminated compression issues that plagued the label for several years. The PCM mono is acceptable. Optional English subtitles are provided on this region-free disc.

Interesting liner notes by Ralph Tribbey explain that VCI has spent more than 40 years untangling the non-theatrical (including home video) rights to 48 Universal serials, issues finally resolved, that now allow them access to their film elements. The label plans 2K or 4K scans of everything eventually. Also included is a trailer, a poster and photo gallery, and bonus cartoons and a newsreel.

An enjoyable nearly-lost sci-fi serial, for fans of this type of short it comes Highly Recommended.