Godzilla: King of the Monsters

Warner Bros. // PG-13 // August 27, 2019 // Region 0
List Price: $24.99 [Buy now and save at Amazon]
Review by Stuart Galbraith IV | posted September 9, 2019 | E-mail the Author
Despite a life-long affection for Japanese monster movies and professional/scholarly ties to that genre, having written books, audio commentaries and the like, I realized going in that Godzilla: King of the Monsters (2019) was not made for 53-year-old me. To expect anything resembling the "classic" Godzilla movies of my youth would have been unwise. I therefore accepted from the start that this would be a film targeting an 18-24-year-old demographic of mainstream moviegoers drawn to high-concept entertainment.

But surely even 18-24-year-olds deserve something better than this stupefyingly bad movie. I didn't anticipate liking it all that much, but figured it might be clever or interesting here and there, and assumed, at least visually, that it would be reasonably spectacular. Instead, I sat dumbfounded by its continual onslaught of awfulness.

The first American-made Godzilla (1998), was smug and smarmy, made by conceited, benighted filmmakers certain they'd gifted the brand with their magical presence, fashioning a blockbuster for the ages. The resulting movie was quite bad, but Godzilla: King of the Monsters is far worse, a postmodern high-concept film profoundly stupid with nothing to recommend it. 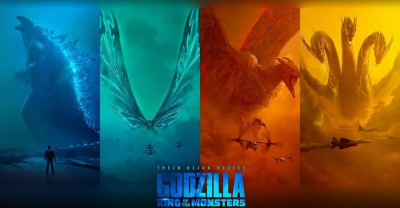 The plot is both extraordinarily simple, even schematic, yet relentlessly busy, overstuffed with clichéd characters and non-stop action. Five years after Godzilla has laid waste of San Francisco, paleo-biologist Dr. Emma Russell (Vera Farmiga) is now separated from her husband, animal behavior specialist Dr. Mark Russell (Kyle Chandler). Both worked in the development of "the Orca," a super-high-tech device overseen by a scientific-military organization called Monarch, enabling communication with the many monsters recently discovered to be hibernating throughout the globe.

Emma and their 12-year-old daughter, Madison (Millie Bobby Brown), witness the hatching of Mothra, in larva form, underneath a pyramid in China, but just as she's starting to communicate with the super-sized creature, eco-terrorists led by Alan Jonah (Charles Dance) kill all the other scientists and kidnap Emma and Madison.

The vast Monarch team enlist Mark's help in tracking Jonah, an MIA Godzilla, and Emma and Madison before more monsters are unleashed. At a base in Antarctica, it soon becomes clear that Emma has not been kidnapped, but has joined Jonah's terrorist organization so that, together, they can destroy the world in order to save it. There, they unleash "Monster Zero," a.k.a. Ghidorah, the three-headed monster. Soon, other monsters begin attacking other great cities throughout the world, all because, according to animal expert Mark, Ghidorah is the "alpha male" of the pack, just like wolves. And why wouldn't a 10,000-ton three-headed monster from outer space lead a pack of varied earth-born giant monsters exactly like wolves follow other wolves?

(For that matter, what follows functions nothing like a wolf pack anyway. The monsters pummel cities across the globe independent of one another.)

Godzilla: King of the Monsters is almost breathtaking in its stupidity. In one climatic moment, Mark is desperate to find his missing daughter. He knows only that she's fled to Boston, a city of nearly 50 square miles. At one point, with buildings collapsing all around him, automobiles flying through the air, explosions all around, and the colossal feet and swishing tails of 300-meter-tall monsters threatening to squish him like a bug, Mark stands around yelling, "MADISON!!!" Like that was going to work?

Those in the cast lucky enough to warrant billing on the posters are possessed of superhuman qualities on par with James Bond or maybe even top-tier Jedi Knights. While the extras playing ordinary foot soldiers or background scientists are eaten, stomped on, sprayed with terrorists' bullets, and crushed under buildings, the Russell family and other leads are virtually indestructible, constantly running like mad but always evading certain death as whole swaths of the planet blow up around them. At one point, the monsters' mayhem sends Mark flying a hundred feet through the air at 90 miles per hour against a stone wall. Where ordinary humans would suffer innumerable broken bones (at least) requiring weeks of bedrest, Mark shrugs off this minor inconvenience and hops right back to work, jobs that might include operating the controls of a super-jet's loading dock with no prior training or assistance, or arming the weapons systems aboard a nuclear submarine. Not bad for an animal behavior specialist.

High-concept tropes are present with depressing predictability: the wisecracking second banana scientist; the stereotypical mystical Asian with special insight on the creatures (here there are two, played by Ken Watanabe and Zhang Ziyi, she light-years from the simple pleasures of Zhang Yimou's The Road Home); super-computers everyone stares at, far advanced of today's technology, but which always break down at the worst possible moment, yet which can be hot-wired with ease, etc.

The family dynamic at the center of Godzilla: King of the Monsters is trite beyond words. After virtually ensuring the destruction of the entire human race, Emma tries justifying her crimes to a shocked Madison with this: "I know things haven't exactly gone according to plan...."

The dreadful screenplay by director Michael Dougherty and Zach Shields, from a story credited to them and Max Borenstein, not only insults the audience with its poorly-conceived characters and utterly inept storytelling, but also with its warped attitudes and appalling casualness about environmental issues and nuclear weapons. Where the original, 1954 Gojira had been a cautionary tale of the Cold War and the dangers of nuclear testing and stockpiling, in Godzilla: King of the Monsters, using "nukes" (as characters here describe them) is as freely applied as a can of Raid against a cockroach lurking behind the fridge.

More alarming, the depiction of all of the so-called environmentalists seen here, only as richly-funded (through trafficking Titan DNA) eco-terrorists, presents a profoundly false equivalency, likening them to those actually inflicting all the real harm around the real world. In their laziness, the writers avoid the real threat by creating a non-existent one by transforming environmentalists into villains, much like the so-called "Antifa," a non-existent formal organization of antifascists, is equated to the very real white supremacist movement. The causes of mass extinction and headlong destruction of the planet are only fleetingly and vaguely alluded to, via a strange little movie Emma plays for her skeptical rivals, with video doctored with optically-added scratches and the like (Why? For art's sake?). The movie is much too dumb to have any serious political aspirations, and making the villains eco-terrorists and the cornerstone of the plot comes off as unusually cheap and cynical.

Even bad giant monster movies sometimes have one saving grace: spectacular scenes of destruction and monster action. But here, too, Godzilla: King of the Monsters fails miserably. Most of these scenes take place above and under stormy seas, or in major cities at nighttime during Category 5 (or 6, in this case; Donald Trump, take note) hurricane-like conditions, where it's hard to see the monsters clearly and discern their actions. Behaviorally, the monsters themselves are interchangeable, lacking unique qualities and even personalities present in the Japanese monster movies of the 1950s-‘70s. The filmmakers also extensively borrow bits of monster-action from lots of other movies, virtually replicating whole scenes from the Godzilla and even unrelated Gamera movies of the 1990s. One sequence involving Rodan, the flying Pterodactyl-like monster, even borrows from the notoriously bad ‘50s cult classic The Giant Claw.

The director and editor have no understanding of spatial relationships. Often the movie audience has no idea where characters are in relation to the monsters or one another. So bad is this it wasn't until two-thirds into the movie that I finally figured out that most of the characters were moving from place to place aboard a massive jet aircraft resembling the Flying Wing but absurdly larger, like an airborne football stadium. One long sequence has them trying to outrun Rodan while also trying to save a bunch of refugees aboard an M-22 Osprey aircraft trailing behind. Jack-of-all-trades Mark rushes to the rescue, naturally, improvising the rescue by blowing the hatch (he has no difficulty finding the right buttons to press - child's play) allowing the Osprey to make a crash landing inside the racing supersized jet. Even writing this paragraph, I can hardly believe how dumb this sounds.

Shot digitally for 2.35:1 projection, Godzilla: King of the Monsters looks okay on Blu-ray, the dark, murky image throughout reflective of the visual choices of the director and his DP rather than the video transfer. Typical of such a wide release, myriad audio options are available: Dolby Atmos, Dolby TrueHD 7.1, and Dolby Digital 5.1 mixes in English, French, and Spanish, with subtitles available in those three languages. The region-free disc is accompanied by a DVD copy and Digital HD access.

Again, as usual for a wide Blu-ray release such as this, Godzilla is packed with six puff-piece featurettes, totaling more than an hour. Also included are deleted and extended scenes (please, God, no); trailers; and an audio commentary track featuring members of the cast and crew.

But what did I really think of Godzilla: King of the Monsters? In academia, some film theorists talk of "terminal cinema," i.e., how movie genres eventually exhaust every conceivable permutation it offers and, bereft of fresh ideas, either run dry or abruptly transform into something else. This film would seem to exemplify the former, yet some fans of kaiju eiga apparently loved it as much as I loathed it. Nevertheless, if there's a case to be made in its defense, I can't imagine what that might be. Skip It.