Life with Lucy: The Complete Series

Paramount // Unrated // October 8, 2019
List Price: $34.97 [Buy now and save at Amazon]
Review by Stuart Galbraith IV | posted October 29, 2019 | E-mail the Author
For Lucille Ball completists, the release of Life with Lucy (1986), her ill-fated final sitcom, is most welcome. I Love Lucy/The Lucy-Desi Comedy Hour (1951-60), The Lucy Show (1962-68), and Here's Lucy (1968-74) kept her on the network airwaves nearly constantly for a quarter of a century, but her return to theatrical features with Mame (1974) flopped badly, with Ball singled out for atypically harsh reviews. After that she did annual television specials for a few years, and was a frequent presenter at award shows.

In November 1985 she starred in The Stone Pillow, a TV-movie in which she played an elderly homeless woman, and while that program received mixed reviews it did well enough in the ratings to prompt Ball and her (second) husband, comedian-producer Gary Morton, to dip into the sitcom well that had served her so reliably well and for so long.

Co-produced by Aaron Spelling and Douglas S. Cramer, a longtime executive at Paramount, Life with Lucy initially generated enormous interest. Ball hadn't done this sort of thing in more than a decade, and at 75 years old she was hardly a spring chicken. Was she physically up to the rigors of a weekly sitcom anymore?

Reviews were harsh, even cruel, and after debuting in the Nielsen's Top 25 (at #23), its ratings plummeted and the show was canceled after only eight of its thirteen filmed had aired. Devastated by its failure, Ball's health quickly deteriorated, and she died in April 1989.

Since then several articles and even a book claim Life with Lucy as one of the worst sitcoms of all-time, but that's hardly true. Rather, the show rigidly follows the same template Ball had used with great success on her three previous comedies, a formula that was badly dated by the time Here's Lucy ended, and positively anachronistic by 1986. Her type of broad physical slapstick was out of touch in a sitcom world for years dominated by a more sophisticated comedy in shows like Mary Tyler Moore, Maude, The Bob Newhart Show, Taxi, Cheers, etc.

But, revisited with more than 30 years' worth of hindsight, Life with Lucy really isn't all that bad, and is even impressive in some respects, though it does have an air of being unstuck in time. 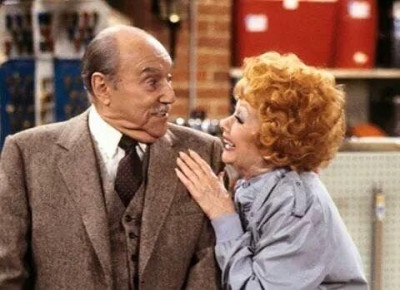 Ball is Lucy Barker, a widowed grandmother who moves into the spacious home of her adult daughter, Margo (Ann Dusenberry), son-in-law Ted (Larry Anderson), and their precocious children, Becky (Jenny Lewis) and Kevin (Philip J. Amelio II). Lucy has also inherited one-half interest in her late husband's hardware store, and despite a total lack of experience (or competence) insists on helping out, despite the protestations of grumpy co-owner Curtis McGibbon (Gale Gordon), coincidentally also Ted's father.

With complete creative control over the series, Ball insisted on using her longtime writers Bob Carroll, Jr., and Madelyn Pugh, who had been writing for her since My Favorite Husband, I Love Lucy's radio predecessor. My Favorite Husband cast member Gale Gordon, later Ball's foil on both The Lucy Show and Here's Lucy was likewise brought in, this despite the fact that Gordon had semi-retired and at 80 was even older than Ball.

What's remarkable about Life with Lucy is how it falls right in line with Ball's other series. Despite a few awkward concessions to mid-1980s fads (strange diets, Walkmans, etc.) the basic nature of the comedy is completely unchanged. And, equally remarkably, so too is Lucille Ball. Despite her advanced age and chain-smoker croak, she dives into the same physical comedy she'd always done before, seemingly reenergized by the appreciative in-studio audience. She looks every bit of 75 but acts as if she were, say, 50, which begs the question: What if Life with Lucy had been a hit instead of a failure? Did she expect to be performing physical schtick at this level five seasons later at 81 (and, with Gordon, at 86)? Some of the slapstick is pretty benign, like Lucy and Curtis being overwhelmed with fire extinguisher suds, but one episode has them stranded on a top shelf at the hardware store, perhaps 18 feet off the ground. What if one of them had fallen?

Admirably, Gale Gordon is full of the same energy as Ball, his booming voice losing none of its threatening tenor. As Ball's longtime foil, Gordon was her secret weapon, and he with his withering insults and overemphatic outrage is at least as amusing as she is.

But Ball and her writers make several big mistakes. None of Ball's series really clicked when children, even adult children, were around. The Lucy Show began with that widowed Lucy the mother of two children, who seemingly vanished over time. Ball's real-life son and daughter, Lucie and Desi Arnaz, Jr., were brought in for Here's Lucy, but they rarely played pivotal roles in the scripts. The characters other than Lucy and Curtis are even more blandly conceived, and portrayed by generic ‘80s actors, competent but unmemorable.

And while Ball's (and Gordon's) age-defying antics are undeniably impressive in their way, the show errs in almost completely avoiding age-related issues, done with much greater success and directness on programs like The Golden Girls, whose hit status partly inspired the creation of Life with Lucy.

Ball, of course, famously teamed with actress Vivian Vance for I Love Lucy and the early seasons of The Lucy Show, before Vance decided to move to Connecticut and infrequently appeared with Ball thereafter through 1977, two years before her death. Later, Ball often worked opposite other women like Mary Jane Croft and Doris Singleton, but Life with Lucy only half-heartedly attempts to team its star with an actress of her same generation and caliber, The Honeymooners' Audrey Meadows, in a single appearance.

The DVDs extra features are sadly enlightening. An Entertainment Tonight interview gushes about Ball's return, and on-camera she is relaxed and confident. But a later appearance on Hour Magazine, apparently filmed as the program was spiraling toward cancellation presents Ball unusually emotional. She pays earnest tribute to co-star Gordon, saying she would never have agreed to do the series had he turned her down, and tears up when host Gary Collins mentions Vivian Vance, with Ball insisting that she wouldn't even attempt to find another woman to replace her.

Life with Lucy was a three-camera 35mm show like all of Ball's previous sitcoms, though this time finished on tape. The resultant resolution is a couple of notches lower, therefore, than Ball's earlier shows on DVD, but mostly it looks fine. All 13 episodes are including, including the initially unaired ones, across two discs.

Supplements include the previously noted Entertainment Tonight and Hour Magazine segments, along with a collection of network promos.

In retrospect, Life with Lucy is neither a career highlight nor quite the disaster many remember, either. It's basically a very slight variation of the same sitcom show Lucille Ball did most of her professional life. It doesn't fit the changing styles of ‘80s television comedy much at all, but on its own terms isn't bad. Mildly Recommended.