Return of Martin Guerre, The

The original film is based on a true story and, indeed, seems to follow the historical events as recorded quite closely. The movie is structured as a mystery, but the dénouement is really less important than the film's many other qualities, ranging from the impressive authentic period details, especially the Oscar-nominated costume design, to the many intriguing issues it raises. 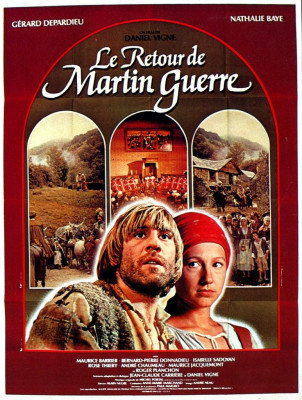 Partly told in flashback, the story begins around 1538 in the village of Artigat, in the Pyrenees of southwestern France, when Bertrande de Rols (Baye), the teenage daughter of a moderately well-off farming family, is married to 14-year-old Martin Guerre (Bernard-Pierre Donnadieu). Though initially regarded as an excellent match, Martin is unable to consummate their wedding initially, and they are childless for eight long years before a son, finally, is born. Martin, irresponsible and no good at farming, becomes an embarrassment to his unforgiving, cruel father, and he's cold and unloving toward Bertrande and their son. Accused of stealing two bags of grain, Martin abruptly disappears from the village.

Eight years later, in 1556, an older, adult Martin (now played by Depardieu) suddenly returns home. His long absence and earlier misadventures are instantly forgiven by the entire village. After some initial awkwardness, Martin is embraced by Bertrande and the family. He is now a loving (and sexually active) husband and doting father. Soon, two more children are born. With his father dead, Martin's Uncle Pierre (Maurice Barrier) has married Bertrande's widowed mother and is the new patriarch yet, initially, he welcomes Martin back as well.

Martin explains his disappearance by stating that he served as a soldier during the war, entertaining family and friends with stories of his encounters with strange foreigners and life in the unimaginably huge city of Paris.

However. From early in the story (and only about 20 minutes into the film) there are concerns whether the man claiming to be Martin Guerre is really him. He looks like a fleshier, more adult version of the younger Martin who left all those years ago, and seems to know everyone in the village along with myriad details about their lives. Most of the townsfolk are certain Martin is Martin, but others aren't quite so sure. Eventually, Pierre comes to believe Martin is an imposter, out to steal the family's precious land and, in an ambush staged by Pierre, Martin is badly beaten. Martin and Pierre bring charges against one another, leaving jurist Jean de Coras (Roger Planchon) among those trying to unravel the truth of the man's identity.

Though the movie, directed, produced and co-written by Daniel Vigne, does definitively answer the central question before it's over, that's less important than studying how everyone, from Bertrande and the immediate family to acquaintances in the village, grapple with the ambiguities and inconsistencies about Martin's true identity and aims. Is the wife certain one way or another, and when does she guess or figure out the truth? Does it really matter? The old Martin was not a good husband for her, but the new Martin, whether really Martin or someone else, is nearly the opposite: kind, a hard worker, a loving father. If he's not really Martin, what's he playing at? Personal gain? The family farm is valuable, but what is the point of stealing land when he's already ensconced there with everything he could possibly want?

Jean de Coras, wonderfully played by stage actor Planchon, seems to believe Martin is a very clever fraud, so intelligent in his defense he comes to admire the alleged impersonation, but even he's not so sure Martin isn't who he claims to be. Peripheral characters vary from being absolutely certain Martin is who he says he is, while others (including Delicatessen's Dominique Pinon), many of whom would lose money or standing in the village if Martin were an imposter pulling an elaborate con, are equally insistent.

Depardieu and Baye (whose character, visually, seems based on Vermeer's Girl with a Pearl Earring) masterfully, subtly express all the ambiguities and contradictions of their characters, while Maurice Barrier is equally fine as the threatening Uncle Pierre.

Another facet of this fascinating little film is its depiction of 16th century life. The family are neither pitiful peasants nor are they rich, but through their hard work have built a thriving farm where no one starves and otherwise they enjoy life in their village. They work hard during the day but sleep in big comfortable beds at night. At Martin's trial, the jurists and advocates aren't oppressive religious fanatic types, but are reasonable, kind, and thoughtful, all this a slight departure from the usual historical drama. Anne-Marie Marchand's costume design was justifiably nominated for an Academy Award; the clothes worn by the characters are alien to modern sensibilities yet entirely functional and historically correct.

From Cohen Media, The Return of Martin Guerre is presented in 1.66:1 widescreen via a new 4K restoration that makes it look like a brand-new movie. The 2.0 DTS-Master Audio (mono) is also fine, and while the disc defaults to the recommended French track, an English-dubbed version is also available. English subtitles accompany this Region "A" disc.

Two trailers are included but the primary extra is a 16-minute video interview with actress Nathalie Baye, who discusses the film thoughtfully and in detail.

An impressive, one-of-a-kind film, The Return of Martin Guerre is a DVD Talk Collectors Series title.