As a lover of all things 3D and also of vintage sleaze, this was one of the most anticipated releases of the year. Let's see if it meets my expectations: 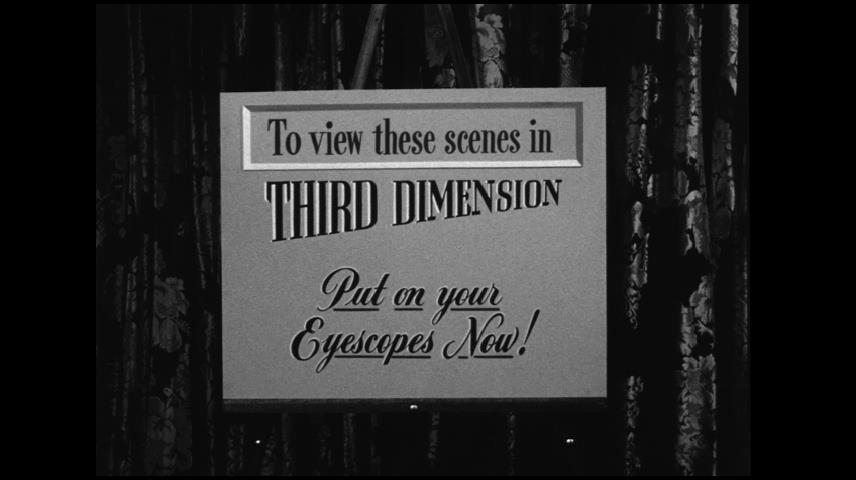 The first feature on this disc is The Bellboy and the Playgirls dated 1961. This is known for being an early work of Francis Ford Coppola, but there are a few things to keep in mind. Most importantly, this movie is not entirely in 3D- only the last 13 minutes are. You might be a bit disappointed not knowing that going in. Another important point that I wasn't aware of on first viewing is that it largely consists of footage lifted from an earlier German movie (shot not only in 2D but also black and white), dubbed in English and with new American material to pad it out and ultimately make it even more confusing. The original film deals with rehearsing a stage play, and the main actress suddenly being reluctant to get intimate with another actor as the script calls for. The play's director calms her by describing how "old-fashioned values" have always been exaggerated, at which point the film cuts to flashbacks set in ancient Greece and the medieval ages. The point of these is supposed to show that even thousands of years ago, casual sex was considered fine and not reserved just for people "truly in love" as conservative values often claim. Very little actually goes on in these flashbacks though, they're basically weak attempts at humor without even any cheap thrills to be seen. 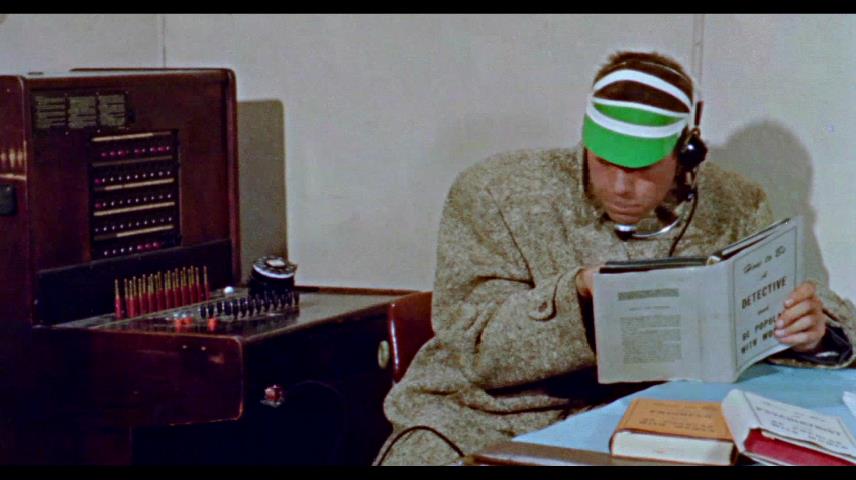 For this American version, the German film is framed by the addition of "George," who is working in the theater as a stagehand and watching things from above. He introduces himself onscreen as the bellboy at the hotel next door, and that he's taken this stagehand job to learn how to not be so afraid of women. He also says he aspires to be promoted to hotel detective (a real position, where someone in plain clothes patrols a hotel looking for anything illegal going on). The scenes at the hotel, directed by Coppola and edited by Jack Hill, are in color- George figures he has a chance to strengthen his detective skills when a room is rented as a place for prostitution. He not so discreetly peeks into the room observing the goings-on. He then goes back to the theater (in black and white) where the editors try to work more of the German film into the plot, and the movie switches to 3D for the big finale in the hotel room- consisting largely of a leering shot of the women getting dressed and undressed. Being this disc's main attraction, on one hand it's good to finally see this film presented as intended but despite being early work from future talent it's just plain bad. Even if you're just watching this for the nudity, you'll likely be disappointed at that as well. It's incredibly tame by today's standards and even compared to other exploitation films from that time period. The 3D in the final segment is at least rather strong, with some of the women and props extending out of the screen. Overall this film should be viewed as a big curiosity with no expectations. 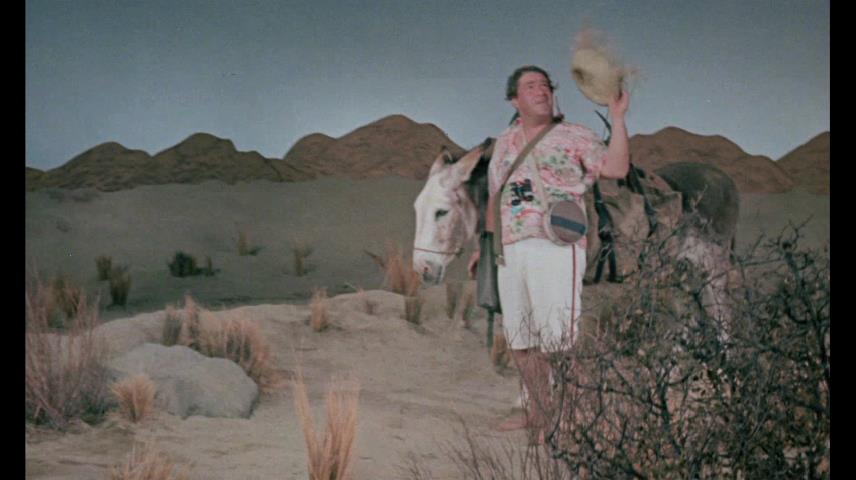 1962's Adam and 6 Eves, running about 70 minutes, is the second feature and almost enough to redeem any disappointment from the first. This one is a far better example of an old-time nudie picture with excellent 3D as well. It's basically an excuse for topless women to cavort around the screen for an hour. But these films are still much more fun if you bother to follow the plot- here we have Adam (Randy Brent, in his only known film appearance and thankfully NOT appearing anywhere near nude), out in the desert (obviously an indoor sound stage) with a donkey searching for buried treasure. Out of water and exhausted, they stumble onto an oasis with green foliage, running water and most importantly six beautiful topless "natives". They tease him and seeing that he's searching for treasure, try to throw him off course. The film is held together by narration from the donkey, whose voice is uncredited but provides many corny laughs for those who bother to keep the sound on. The early-60s exotica music score is amusing enough, but the donkey periodically interjects with comments like "what Adam lacked in intelligence he more than made up for in stupidity". The 3D is exploited here about as much as the female cast members- this was actually the last film shot with the same Natural Vision camera rig as classics such as House of Wax, but was only shown flat in theaters and never seen in 3D until now. With nudity a definite no-no in major studio films back then, it must have been a dream of the filmmakers to see bare breasts heaved towards the camera and out of the screen, and that dream is fulfilled. The oasis set also takes good advantage of the format, with plants sticking out every which way. 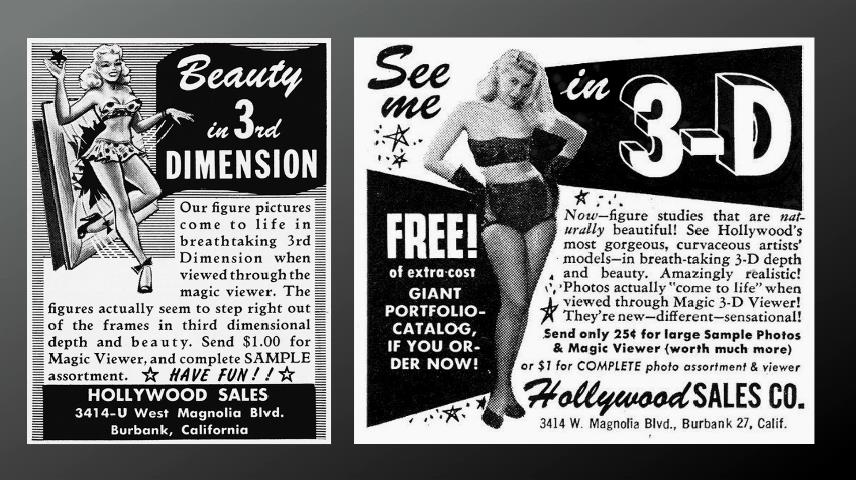 The disc also promises "two Golden Age 3-D short subjects" but the first titled "Beauty in 3rd Dimension" is actually a slide show of "figure studies" shot circa 1951, taken from a series of slide cards viewed in a View-Master-like device that you could order through the mail. These are quite nice-looking, some done with interesting abstract backgrounds while others have their subjects amongst now-vintage looking 50s-era furniture. The second "Love for Sale" is a burlesque film featuring exotic dancer Bella Starr cavorting in somewhat revealing outfits that change instantly but no real nudity. This was originally shown in the primitive red and blue 3D format, but upgraded in this presentation- as a gimmick she blows a cigarette into the audience. An interesting curiosity. 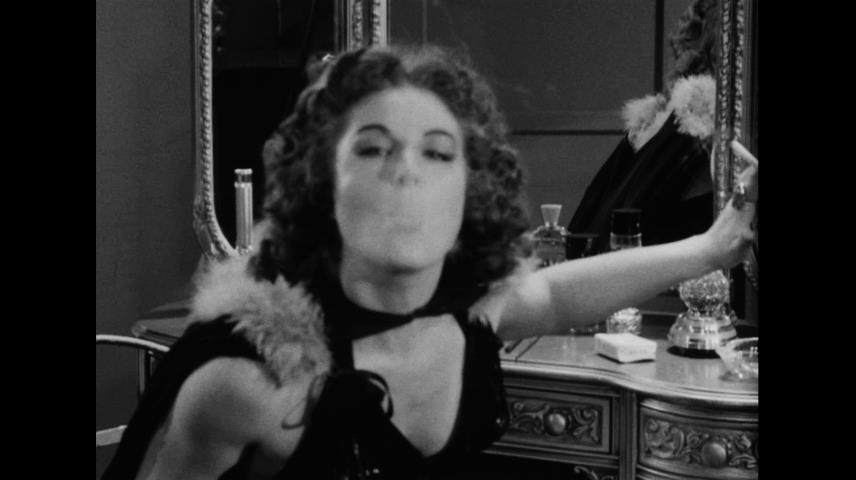 All material here was restored by the 3-D Film Archive and as usual they've gotten it looking about as good as possible without spending a fortune. All film elements are very clean with minimal damage, any that might exist has been cleaned up. Bellboy is entirely encoded in 3D even though it's only used during the last scene, this prevents an interruption in the presentation but you will need to keep your 3D glasses on during the entire movie or the 2D footage will appear too bright without them if your picture is set correctly. I'm glad to report that on my 4K LG passive 3D display the 2D portions looked just as they should this way, with the glasses (worn over my regular ones) being no inconvenience at all. These displays are an incredible technology and it's a huge shame that LG decided to abandon them. The black and white portions are sharper than those in color, although I saw some slight compression artifacts during the opening titles. The color footage, shot on 16mm, is rather soft and typical of a low-budget exploitation film. There was a hair in the aperture plate on the left side of the screen in the right eye view during some shots in the 3D segment, and I'm glad it was left that way rather than cleaned up. Adam and 6 Eves looks very clean especially considering how difficult it must have been to track down decent elements. If you bother paying attention to the donkey, you can see some thin strings attached to his ears that someone off-camera is pulling. This is presented in a 1.66 aspect ratio. Again, the 3D in this film is simply stunning. The disc includes a 2D viewing option as well, showing just the left eye view, but why would you ever want to see these like that?

The mono sound tracks are encoded in 2-channel DTS Master Audio and stay properly centered. Quality is a bit dated as sound wasn't a huge priority for any of these films. A few seconds of the second feature include a bit of noise that suggests the audio was in worse shape than the picture elements they were able to find, but all of it is passable. 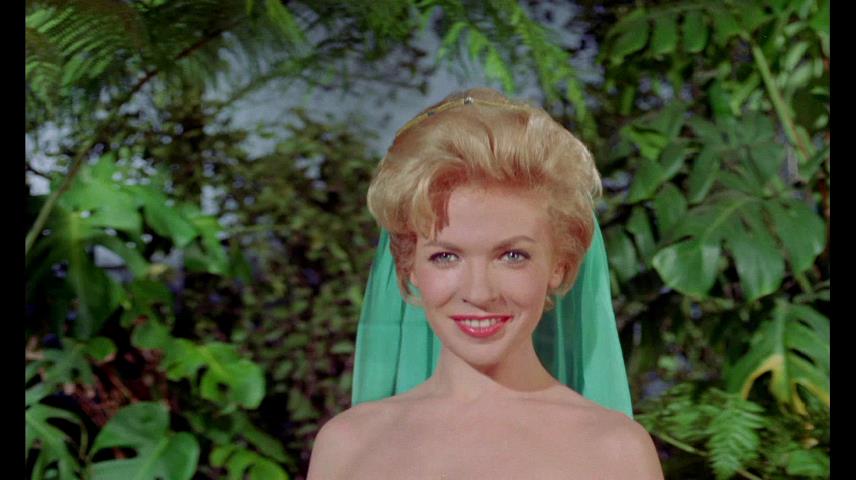 The Bellboy and the Playgirls is a real dud in terms of 3D, nudity and anything resembling a decent movie, so it's a good thing this wasn't sold on its own. Given its pedigree it is a somewhat important film nevertheless and it's good to have it preserved here. Adam and 6 Eves is demo-worthy 3D material however, at least for those with a good sense of humor. 3-D Film Archive needs big commendation for continuing to restore these films even after hardware support for 3D has unfortunately declined; I would argue that their releases are good reason alone to keep 3D support on future displays. Their previous titles have at least given us a peek at their restoration techniques; this release includes no liner notes or extras but I'd imagine it wasn't easy to make these films look as good as they do here. I'm hoping that they can at least find enough material for a second volume later.