Paramount // Unrated // November 12, 2019
List Price: $28.45 [Buy now and save at Amazon]
Review by Stuart Galbraith IV | posted December 4, 2019 | E-mail the Author
This review necessitates an unusually long premise, so bear with me. I'm a lifelong casual fan of the Star Trek franchise, from the original 1966-69 series through The Next Generation and, a bit less so, Deep Space Nine and all the feature films made up to that point. In the minority, I also regard Star Trek Voyager as the best, most daring of the "Next Generation" era shows, but didn't care for Star Trek: Enterprise, as its post 9/11-era teleplays seemed to swing the Star Trek universe hard to the right, in directions that seemed in stark opposition to the original intentions of the franchise's late creator, Gene Roddenberry.

That series ended in 2005. Four years later J.J. Abrams's Star Trek feature film attempted to "reboot" the Star Trek universe, with new actors playing characters from the original ‘60s show. I pretty much loathed everything about it, mainly because of its tiresome relentless CGI action and how it veered even further from the spirit of the first four television series. I didn't much care for Into Darkness (2013), either, and never got around to Star Trek: Beyond (2016), having even to look up its forgotten title and only barely remembering it existed.

In grabbing the DVD screener for Discovery: Season Two, I was unaware that this new show was radically restructured to be more like contemporary TV dramas, with season and even series-long story arcs. A lot, apparently, happened over the course of Season 1, and I found myself utterly lost during the first several episodes of Discovery's Season 2. 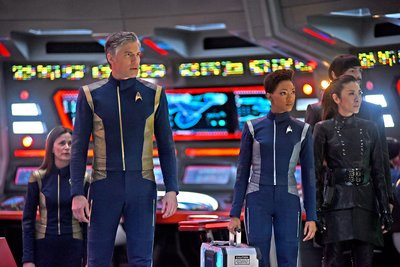 Star Trek: Discovery is set a decade or so prior to the Original Series, i.e., the Captain Pike years, he in fact (now played by Anson Mount, taking over from long-dead Jeffrey Hunter), assuming command of the U.S.S. Discovery following the Season 1 finale. Unlike captain-centric previous shows, Discovery's main character is Michael Burnham (Sonequa Martin-Green) who, despite the name, is a female science specialist. Though human, she was raised on the planet Vulcan, by Sarek and Amanda (from TOS), no less, making Spock a kind of half-brother. Indeed, much of Season 2 could be subtitled "The (First) Search for Spock," as it teases viewers for much of the run with a story arc concerning the Discovery's efforts to locate the legendary Vulcan.

There are myriad other recurring characters of varied prominence, and one of things I like about this new series is that it seems at least half of them are women, more than a third are non-human alien species, and that white men are definitely a minority, with women of various races (and species) in high-level command positions throughout. Anson Mount's traditional Christopher Pike really does seem out of place on the Discovery's bridge.

Overall, Discovery appears to be trying - and frequently struggles with - trying to walk a fine line between the more leisurely character-driven elements that made the 1987-2001 Star Trek shows work so well, and the perceived expectations of 2019 TV audiences (and, perhaps specifically, a streaming audience) weaned on the J.J. Abrams reimagined Star Trek.

One reviewer on the IMDb put it as well as I can when he (or she) wrote "Slow down." Discovery tries to have it both ways, with feature-film slam-bang CGI-manufactured epic-ness, and the more thoughtful, introspective, and the slower, character-driven pace of The Next Generation and its follow-ups. Those two elements aren't necessarily incompatible, but it's razzle-dazzle overload annoyingly dominates some (but not all) episodes. The overly-tight, cinema-style cutting, the need for epic-scale spectacle overwhelms the character stuff, which in the end is far more compelling than any of its expensive-looking special effects.

And expensive it is, reportedly $8-8.5 million per episode, or approximately the Original Series' budget for the entirety of its first two seasons, or six Next Generation episodes. Straddling between streaming and broadcast demands, with 15 episodes in Season 1 and 14 in Season 2, presumably there's less of a time-crunch compared to network/first-run syndication seasons of 22-30 episodes, and therefore more time to hone scripts. Conversely, there's probably also less opportunity to learn-as-you-go, to find the series' "voice" over the course of season, seeing what characters and storylines play and which don't. This type of production demands planning more in advance, with less tweaking along the way. From what I can tell, most of the tweaking occurred between the first two seasons, rather than mid-stride.

What I've seen of Discovery is certainly far more promising than the recent movies. The characters are all interesting and played by good actors. Though I dearly wish they'd dial back the senses-assaulting CGI stuff, the show's creators seem determine to stick to some tried-and-true elements from the earlier programs while assertively moving in new directions in other ways, some of which is most intriguing.

Whether or not Star Trek: Discovery is a worthy successor to the franchise's TV universe remains to be seen, but what I've seen so far is, with some major reservations, promising. Recommended.