Bells of St. Mary's, The

Olive Films // Unrated // November 26, 2019
List Price: $27.99 [Buy now and save at Amazon]
Review by Stuart Galbraith IV | posted December 18, 2019 | E-mail the Author
I can't begrudge affection anyone might feel toward The Bells of St. Mary's (1945), the still-popular holiday film Bing Crosby reprising his Father O'Malley character from Going My Way (1944), this time butting heads with nun Ingrid Bergman. Both ooze charm, Der Bingle gets to sing a few songs, there are cute kids doing cute stuff, and the film has a low-key likeability.

Dramatically, however, there's barely enough conflict for a 63-minute B-movie, and this runs twice that, a protracted two-hours-and-six minutes. It seems that in wanting the Catholic Church's official stamp of approval, what conflict there is handled so gingerly and obtusely the picture itself is like being in church. Everything is carefully measured, even mild offense is avoided at all costs, and nobody even raises their voice a little. What problems our protagonists face is, for the most part, archly contrived and unrealistically resolved.

Yet, the $1.3 million production was a huge hit, earning $21 million in the U.S. and Canada, making it RKO's most successful release ever. (They, however, only distributed it. It was made independently by Rainbow Productions, director-producer and co-writer Leo McCarey's company.) 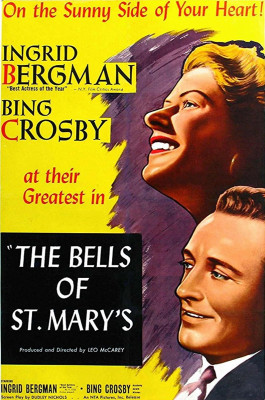 Father O'Malley (Bing) is assigned to the inner-city St. Mary's parish, a dilapidated Catholic school for boys and girls. Part of O'Malley's mission is withheld from the nuns there, for he's to determine whether the property should be sold off to developer Horace P. Bogardus (Henry Travers), who wants to raze its buildings and turn the space into a parking lot for his shiny new high-rise next-door.

Oh-so-gently stubborn Sister Superior Mary Benedict (Bergman) is certain prayer alone will eventually persuade Bogardus to not only give up the idea of turning St. Mary's into a parking lot, but that he'll donate his multi-million-dollar building to the parish, so that St. Mary's will have a new home with state-of-the-art facilities. Father O'Malley isn't so sure.

In the first of several clumsy subplots, Father and Sister disagree about a young boy named Eddie (Richard Tyler), who is constantly bullied by a classmate. In secret Sister Benedict teaches him how to box. In another, adolescent girl Patsy (Joan Carroll) is enrolled when her struggling single mother (Martha Sleeper) begs Father O'Malley to accept her temporarily while she tries to get her life back in order. Later in the film, Sister Benedict becomes seriously ill, threatening her future there.

The unreality of The Bells of St. Mary's is underscored by the way it was shot. It appears that every frame of the picture was shot on a soundstage, including vast exteriors of the high-traffic inner-city street in front of the parish, and Bogardus's development next-door, accentuated by unusually phony matte paintings. Scenes on the street at high noon suggest multiple suns casting shadows from ten different directions, with harsh lighting yet, conversely, as originally photographed (not because of the high-def transfer) the image is rather soft and washed-out.

But the real problem with The Bells of St. Mary's is that little of the drama is believable. (Spoilers) While there's little doubt going in that St. Mary's will somehow wind up moving into Bogardus's building, that Eddie will knock out his rival, and that poor Patsy will somehow find happiness, the script's solutions to these problems are simple-minded, sugary-sweet and, at times, outrageously unbelievable. Further, the problems themselves are never really addressed on a personal level. Patsy's unhappiness about her parents is never adequately explained, why she struggles so with her studies, why her parents separated, etc., nor does the audience ever learn why Eddie's being bullied. Bogardus's transformation from curmudgeonly developer to saintly benefactor is downright bizarre.

Yet so popular was the film, director Frank Capra references it in his It's a Wonderful Life, as the movie on the marquee in Bedford Falls, assuring the audience that George Bailey's safely back home again. And, of course, St. Mary's Bogardus, actor Henry Travers, appears in It's a Wonderful Life as Clarence, George's guardian angel. But Capra's film, whether you love it or hate it is undeniably far more dramatically complex, drawing most of its tension from a believable and relatable inner-personal conflict, its protagonist's longing for adventure he can never have because of moral obligations forever piling up at home.

There's nothing, but nothing like that in The Bells of St. Mary's. Bing's Father O'Malley virtually just shows up, sings a few songs, and effortlessly charms a few souls. Bergman's nun prays real hard with an intensity that anticipates her Joan of Arc and, lo and behold, her prayers are answered. When she gets sick with tuberculosis, her doctor and O'Malley unaccountably hide her diagnosis, and without explanation O'Malley announces that she's being transferred out of her beloved school. She, of course, assumes he's doing this out of spite, and is deeply upset, yet O'Malley's deception, holding back the truth, is dramatically unjustified and, per Catholic Church policies of the time, a complete breach of authority and procedure.

By the end, The Bells of St. Mary's either wins you over or it doesn't. Crosby and Bergman are fun to watch, and the story has some good moments, so it's not at all bad, just paper thin.

Presented in its original black-and-white and standard 1.37:1 ratio, Olive Films' The Bells of St. Mary's looks good on Blu-ray via this new 4K transfer. As noted above, the production method of shooting everything on soundstages results in some unpleasant lighting and a general washed-out quality, but for what it is the transfer looks very good. The DTS-HD 2.0 Master Audio (mono) is fine with optional English subtitles included, and the disc region "A" encoded.

Dramatically crude, overlong, and strangely lacking in conflict, The Bells of St. Mary's is nevertheless a handsomely made production carried to some extent by its stars and should at least be seen once. Who knows? You might love it far more than I did. Recommended.