Dora And The Lost City Of Gold

This movie takes an interesting perspective on the Nickelodeon cartoon "Dora the Explorer" (of which I've seen only one episode, the one on the limited extra disc of the channel's shows included with the first shipment of the Jimmy Neutron: Boy Genius DVD at Best Buy- that was a pretty substantial bonus at the time). While she's about six years old in the original show which was designed to get kids interested in exploring and learning basic survival skills, here she's portrayed by Isabela Moner at age 16. The premise is that while she's lived with her explorer parents (Michael Pena and Eva Longoria) in a South American jungle most of her life, they're about to set out on a trip to find Parapata, the lost city of gold the title refers to. It's a place known to have existed but no one in recent centuries has ever seen it, and they've just figured out where it might be. The trip is too dangerous for Dora to come along though, and she's forced to move to Los Angeles (known here as "The City") and live with her cousin Diego (Jeff Wahlberg, nephew of Mark and Donnie) while her parents are gone. 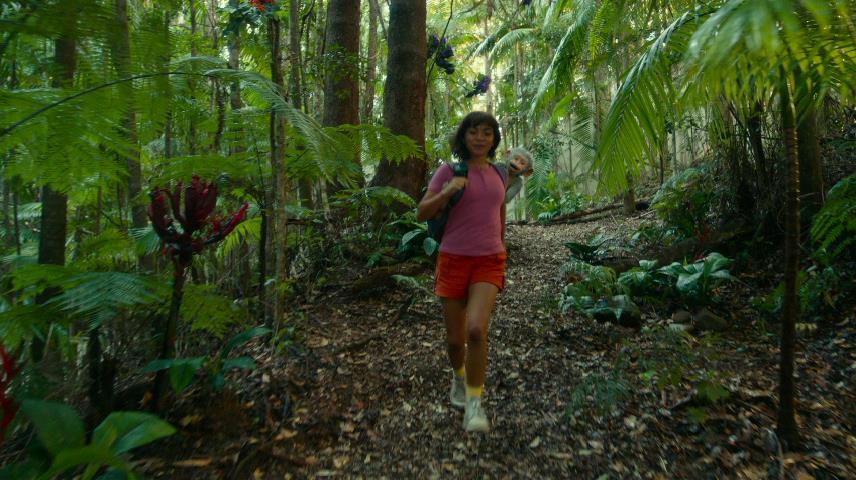 As a live-action character, Dora is portrayed as a sort-of parody of her animated self- while she's a bit older, she has the same upbeat and overly positive attitude which ends up turning off most of her fellow students at school who call her Dorka (a funny moment is when she sings her "backpack" song on the way to school). She's quickly ostracized along with poor Diego once it's learned that he's related to her- before she came along he was trying to be cool like everyone else. The only friend Dora makes is Randy (Nicholas Coombe), a science-obsessed nerd, and she makes a particular enemy of Sammy (Madeleine Madden) for challenging her position as the smartest girl on campus. The four of them get unwittingly thrown into the movie's adventure during a field trip to a museum- the kids are asked to split into groups of four and they're the ones nobody else would pick, then they get lured into the basement when a staff member teases an artifact at Dora that hasn't been put out for public viewing yet. It turns out to be a trap, as the four kids are soon packed in a big shipping crate and end up back in South America where a gang of mercenaries is hoping to force Dora into leading them to her parents and taking the treasures that await at the lost city for themselves.

They're soon rescued by Alejandro (Eugenio Derbez), an old friend of Dora's parents, and led away from the bad guys into the jungle and hopefully back home- but they soon find themselves further chased after. Sammy basically complains about being in such an uncivilized place, while Randy tries to apply his intelligence to the situation. While they just want to get back home as they were simply in the wrong place at the wrong time, Dora wants to join Alejandro and stop the bad guys from finding her parents. Along the way they run into plenty of obstacles, most of which are take-offs of jungle adventure movie conventions played for laughs. While the movie is geared towards kids and those who might have recently outgrown the cartoon, it's still entertaining for older folks even those not too familiar with the original show. 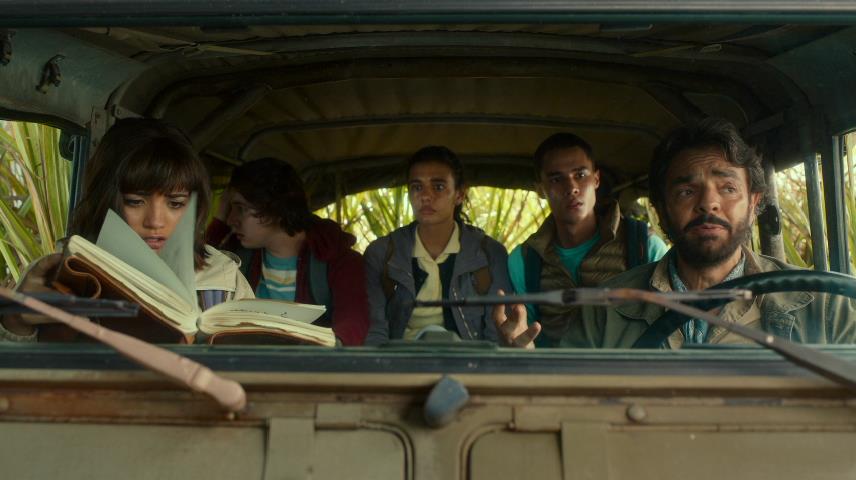 Usually movies taking place in a jungle setting are visually stunning, but this one falls just a bit short of that. The colors just seemed a bit bland to me here, and I did make sure my TV's picture settings weren't at fault- it's just the intended color scheme of the movie, shot digitally. Most of the CG effects are too obvious also- they just look cheap compared to what could have been done with conventional practical effects. Both the Blu-Ray disc and DVD present it at a full-screen, 1.78 ratio. The Blu-Ray is still nicely detailed overall but loses another point for some gradient banding in both some light and dark moments. The DVD of course is much less detailed and shows that format's limitations quite clearly, but someone must be getting use out of these as they continue to be included with most major Blu-Ray titles. I'll note here that the movie includes a few subtitled scenes which are done with forced player-generated text.

The audio was a surprise here- the Blu-Ray is mixed in Dolby Atmos and delivers some of the best effects I've heard at home from the format. Granted my setup, with just two height speakers, isn't the greatest, but this track at least proves that it works. There are a number of overhead effects including voices, and plenty of rear-channel effects as well that made me jump in surprise. The DVD's mix is of course standard 5.1 Dolby Digital, still including most of the rear-channel effects decently. Both discs also include a descriptive audio track as well as Canadian French and Latin American Spanish dubs. The Blu-Ray adds Japanese and Thai dubs on top of that, and includes both standard English and SDH-format subtitles with quite a variety of subs in Malay, Cantonese, Mandarin, Hindi, Japanese, Korean and Thai plus of course Spanish and French which are also on the DVD. 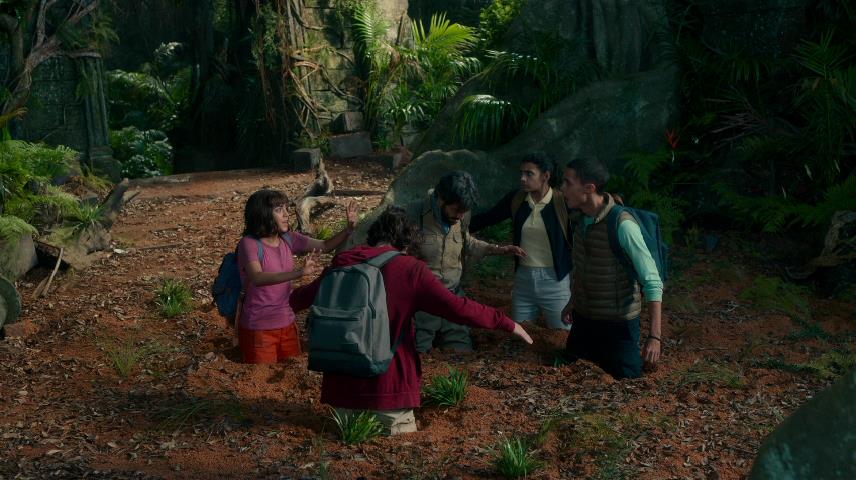 Only the Blu-Ray disc is deemed worthy of any extras, which are rather brief but interesting. We get some outtakes and extended scenes, both with unfinished visual effects- these are also presented in true 1.85 unlike the movie itself. We also get a short behind the scenes featurette, a look at what the filmmakers were trying to do with the Dora character, a bit about the main cast, a look at the design and construction of Dora's parents' house, and another look at one scene that I consider a surprise and won't spoil for you here. (Incidentally the "And Danny Trejo" credit on the back cover is also a bit of a spoiler, as his voice appears rather unexpectedly in the movie and only for a minute- his agent must have demanded this credit.)

If you have BD-Live enabled, you get a few family-friendly Paramount trailers as the disc starts up. No trailers appear otherwise, but the DVD includes permanent copies of three that I saw: a promo for an upcoming JoJo Siwa DVD, "The Casagrandes" on Nickelodeon, and a trailer for Wonder Park (a 3D movie available only in 2D for home viewing; the audio for this on the DVD is in 5.1 while the BD-Live stream is only 2-channel.) 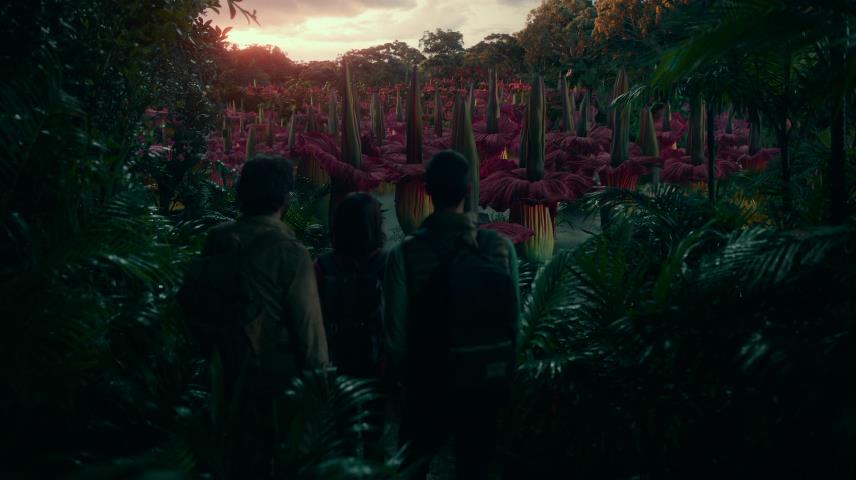 This movie exceeded my expectations a bit, as its trailer made it look kind of silly but a potential guilty pleasure. The finished product shows a bit of acknowledgement that adopting Dora the Explorer into a live-action feature is a somewhat laughable idea, but has plenty of fun with that and doesn't try to go too far beyond its budget or resources. This won't supplant the Indiana Jones series anytime soon, but still turns out better than many of its lower-budgeted imitators did.