Flicker Alley // Unrated // April 7, 2020 // Region 0
List Price: $29.95
Review by Stuart Galbraith IV | posted April 27, 2020 | E-mail the Author
The folks at 3-D Film Archive have done it again, unearthing and restoring titles even more obscure than the bountiful treasures of 3-D Rarities. Volume II, better organized as a complete program, a full evening's worth of 3-D entertainment, again offers impressive fixes of sometimes dicey extant film elements and, from a historical and technical perspective, everything here is utterly fascinating, even when the movies are just so-so.

As movies, Volume II's lineup is a bit less impressive this time out, shorts and a feature that are great fun to watch in 3-D but generally not the kind of thing you'd want to sit through "flat." However, this is more than compensated by inspired new content: narrated presentations of 3-D photographs that, in some ways, are the highlight of this show. 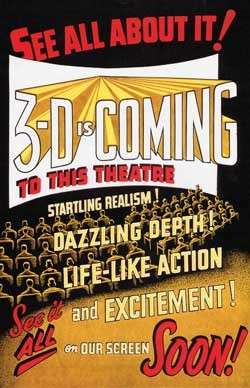 Though 3-D fans might want to bounce around through its content, the disc is presented as a kind of quasi-roadshow, complete with an intermission. The first act is about an hour's worth of short subjects, beginning with the long-lost A Day in the Country, filmed in New Jersey in 1941 but mostly unreleased until 1953. Shot silent and narrated by comic Joe Besser (of The Abbott and Costello Show and brief "third Stooge"), the short plays even older than it was in 1953, like a Mack Sennett silent two-reel comedy, mostly following the antics of two city boys on vacation with their family, getting into all sorts of trouble.

The British-made The Black Swan (1952) excerpts the ballet Swan Lake. The dance form might not be everyone's cup of tea, but the short is interesting for its atmospheric use of expressionistic sets, something resembling a fusing of film noir and The Cabinet of Dr. Caligari. Also of interest is the 3-D process: little notches are visible at the bottom and left-side of the frame, apparently to keep the 3-D effects from "bleeding" outside the frame. It's a subtle but effective innovation, giving the short a slightly different look, a "floating window" effect that distinguishes it from other 3-D processes of the era.

The Polaroid-made Games in Depth (1966), in color, has some interesting 3-D effects but is annoyingly repetitive and features some of the most grating musical underscoring in cinema history. Seemingly designed to do little more than show-off various 3-D effects, it's notable mainly for a few behind-the-scenes shots of Frank Perry's The Swimmer, but even here the footage is limited to long, static shots of star Burt Lancaster standing around in his swim trunks.

Also included is a short prologue created for Frankenstein's Bloody Terror, the American release version of La marca del Hombre Lobo (1968). Consisting of highlights from the movie while portentous narration vainly tries to link the Frankenstein name to the Spanish-West German film's Frankenstein-free narrative, the clips tease 3-D fans, hinting at what must have been a very impressive show in its native Europe. That picture was shot using Hi-Fi Stereo 70, a side-by-side, anamorphic 70mm process.

Finally, there's a 3-D trailer for The 3-D Movie (1983), a tantalizing fury of film clips, some dating from the early silent era. Included are several ‘50s titles not yet available on 3-D Blu-ray (The French Line, Gorilla at Large, etc.), along with a Hong Kong martial arts movie, nature films, a 3-D Mosfilm logo, early experiments in 3-D computer imagery, and some really dazzling material from who-knows-where, including one very impressive slow-motion shot of a Frisbee freezing in mid-air while its thrower approaches to retrieve it. This was apparently compiled by the late Leonard Schrader, director Paul's screenwriter brother, whose credits include The Yakuza and Tora-san's Dream of Spring.

The shorts are bifurcated by the single best component of this release: "Mid-Century Memories in Kodachrome Stereo," a sampling of 3-D color photographs from the late-1940s through the early-‘60s, taken with pricey Stereo Realist 35mm still cameras. It's narrated by stereoscopic anthropologist Hillary Hess, whose meticulously researched commentary is informative, witty, and observant. She makes the most seemingly ordinary photos utterly fascinating, wisely positioning these photos in context with postwar sensibilities and noting how invaluable these artifacts are as windows into a past Americana, several of her remarks unexpectedly come off as quite moving. The disc's producers might reasonably have wondered whether 3-D movie fans would find such material interesting; yet, though only about 10 minutes long, I could have watched hours of this stuff. Here's hoping Hess is brought back for more.

A similar feature stuck at the end of program samples the stereoscopic photographs of silent comedian and avid 3-D fan Harold Lloyd; according to granddaughter Suzanne Lloyd Hayes, who narrates this segment, he amassed an archive of some 200,000 images! Lloyd's 3-D photos are more professionally and artfully shot, and include many Hollywood stars and loads of glamor.

The main attraction is Mexico's first 3-D feature, El corazón y la espada (1953), also known as The Sword of Granada. The swashbuckler follows the uneasy alliance of Don Pedro de Rivera (Cesar Romero), seeking to assassinate the Moor Caliph of Medieval Spain, with lusty Lolita (Katy Jurado) dreaming of riches from an alchemist said to be turning base metals into gold within the castle walls; Ponce de Léon (Tito Junco), in search of eternal youth; and painter Padre Angelico (Miguel Ángel Ferriz), eager to restore Christianity to Spain. Meanwhile, Princess Esme (Gloria Mestre) awaits her arranged marriage, unaware that her guardian murdered her parents and that her betrothed looks nothing like the handsome young prince promised in Angelico's portrait.

Despite the presence of Hollywood actors Romero and Jurado adding U.S. marquee value to the top Mexican stars in the cast, the movie has the look of a Sam Katzman B-movie for Columbia, or maybe a slightly higher-end Monogram/Allied Artists title. The direction, credited to Edward Dein and Carlos Véjar hijo, is barely competent, though the 3-D effects are generally very good, helped mainly by the sets, particularly all its secret tunnels and cramped hidden passageways.

The movie is offered both in its original Spanish and a crudely English-dubbed version that, surprisingly, does not use the voices of either Romero or Jurado. Apparently a few minutes were cut for the English release, so those scenes default to the Spanish audio and English subtitles. The subtitles themselves present a unique challenge: they "float" a bit in front of the screen, requiring the eyes to frequently adjust back-and-forth between the subtitles "out front" and the goings-on behind them. For this reason, I ended up watching the first 20 minutes or so in English so that I could concentrate on the visual aspects, but then switched to Spanish for the remainder of the film, much better for Katy Jurado's spirited performance.

She's the best thing about the film, cast against type from her Hollywood image playing smolderingly sexual, exotic but mysterious Latinas. If the movie is any evidence, she seems to have regarded it as a lark, a frivolous piece of entertainment in which she could have some fun, and her apparent enjoyment is conveyed to the audience.

Once again, 3-D Film Archive has pulled off several miracles, A Day in the Country being a case in point: its sole surviving print was located in the back of an impounded pickup truck, its Pathé colors of its anaglyphic 3-D faded badly. Engineer Dan Symmes works wonders, however, successfully extracting the right- and left-eye images and converting it all to a great black-and-white 3-D image with only slight and occasional ghosting effects. The feature attraction, El corazón y la espada, was scanned in 4K from the original left and right negatives and restored frame-by-frame. The disc is region-free.

An absolute must for any 3-D enthusiast, 3-D Rarities II is a DVD Talk Collectors Series title.